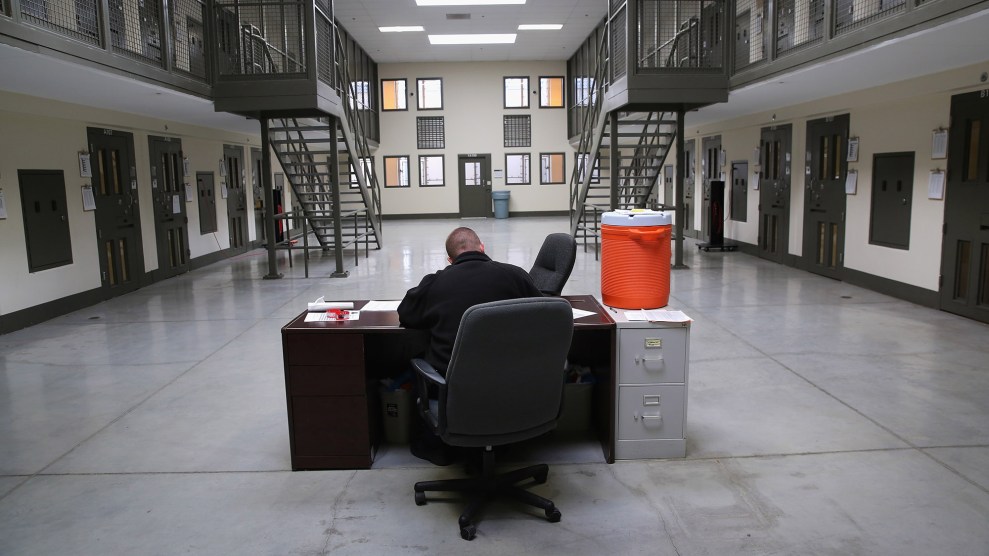 A guard at the Adelanto Detention Facility, an ICE detention center run by the GEO GroupJohn Moore/Getty

As a congressional deal on border security funding came closer to passing yesterday, the CEO of the country’s largest private prison company told shareholders that he expects the agreement will be good news for his business. Due to the increased funding levels for immigration detention included in the deal, the GEO Group—which held nearly 1 in 3 immigration detainees as of mid-2017—will likely detain more people, George Zoley said during an earnings call.

For the past week, congressional Democrats had been pushing hard to cap the number of detention beds available to Immigration and Customs Enforcement. The agency’s network of public and privately run detention centers currently holds more than 48,000 people. The Democrats were trying to force ICE to detain fewer people overall and prioritize locking up immigrants who have been convicted of serious crimes, in contrast to the Trump administration’s practice of prioritizing all unauthorized immigrants for deportation.

But the final budget agreement abandoned those demands and increased the money available for immigration detention, boosting its average capacity from 40,520 beds per day to 45,274. It also doesn’t limit ICE from dipping into other sources of funding to maintain higher detention levels if it chooses.

During the GEO earnings call Thursday, a managing director at SunTrust asked the prison company’s executives whether they expect the deal to “translate into business opportunities.” “We are hopeful,” Zoley replied. “It’s likely given that the authorized level that has now increased by 5,000 beds.” He also noted that the actual ICE detainee population tends to be “significantly higher” than the capacity funded by Congress. Even current detention levels, which are just about the highest in history, could increase under the terms of the deal, Zoley said. “I would expect that the 48,000 could increase through reprogrammed funding.”

Zoley expressed confidence that new ICE detention contracts under the spending bill would flow to private companies rather than public jails, arguing that GEO’s facilities are better at following federal standards for conditions in ICE detention. (The agency routinely fails to hold detention centers accountable for not meeting performance standards and it often deals with deficiencies by exempting the facility from the standard in question, according to a report by a federal watchdog agency released in January.)

It’s not just the business of locking up immigrants that’s looking good for GEO in 2019. A criminal justice reform bill passed late last year could end up benefitting the private prison company as well. As the number of federal prisoners continues to decline from peak levels in the early 2010s, the company has been acquiring halfway houses and ankle-monitoring companies under the banner of its GEO Care division in a bid to reposition itself as a provider of reentry and rehabilitation services. This year, as the federal prison system begins implementing the First Step Act—the bipartisan criminal justice reform law that curbed mandatory minimums and shortened some prisoners’ time behind bars—GEO and its main competitor, CoreCivic, may end up profiting from the changes. “It’s too early to tell” if the reforms will drum up significant new business for the company, GEO Care President Ann Schlarb told investors Thursday. But, she added, “certainly the recidivism reduction programming discussed in the act is the type of programs we provide.”