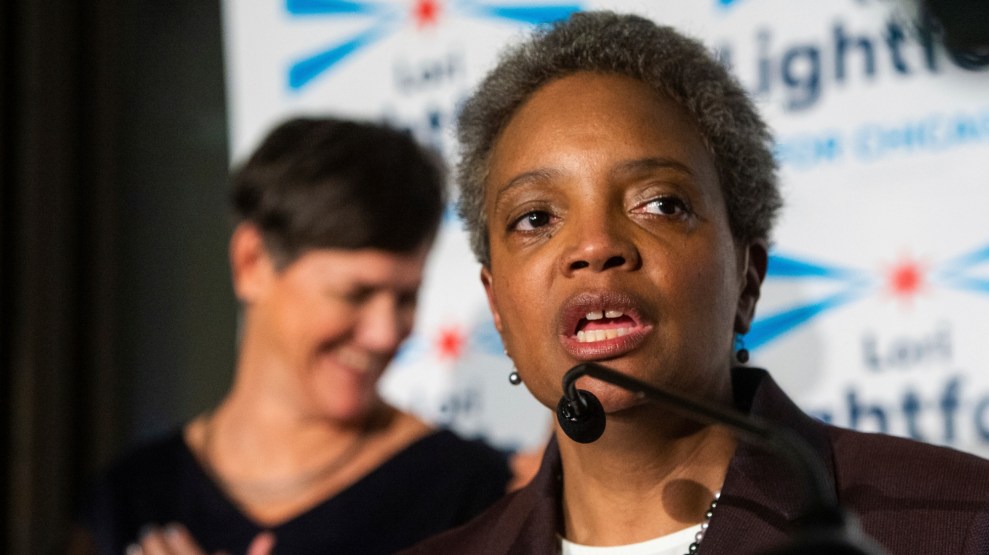 Chicago mayoral candidate Lori Lightfoot addresses the crowd at her election night party as she leads in the polls on February 26, 2019. Tyler LaRiviere/Chicago Sun-Times/AP

A progressive black woman will soon be in charge of the nation’s third-largest city. Lori Lightfoot, a former federal prosecutor, and Toni Preckwinkle, Cook County Board president, are headed to a runoff in April to become Chicago’s next mayor. This will be the first time the city has had a black woman mayor.

The election, which took place Tuesday and began after embattled Mayor Rahm Emanuel announced in September he wouldn’t seek reelection, featured an incredibly crowded field of 14 candidates. They included seasoned politicians like Bill Daley, a former chief of staff in the Obama administration, and newcomers like Amara Enyia, a community organizer with support from musicians Kanye West and Chance the Rapper. The abundance of candidates virtually ensured that the election would go to a runoff. Lightfoot received 17.5 percent of the vote and Preckwinkle received 16.1 percent; Daley, the son of former Mayor Richard Daley, got third place with 14.7 percent.

Despite Lightfoot and Preckwinkle’s apparent similarities—they are both black women who have portrayed themselves as progressives interested in reforming the city’s troubled police department—they sought to highlight their differences immediately after the election Tuesday, according to the Chicago Tribune. While Lightfoot “was taking multiple appointments in the Daley and Emanuel administrations,” Preckwinkle said, “I fought the power elite who have been trying to hold this city back.” Lightfoot was chair of the police department’s accountability task force and also served as president of the Chicago Police Board. Her campaign focused on police reform following high-profile shootings of black men by police, including the 2014 murder of black teenager Laquan McDonald. As my former colleague Brandon Patterson wrote about Lightfoot:

Lightfoot, the youngest of four siblings, was raised in a predominately white section of a segregated Ohio steel town in the 1960s and 1970s. Her parents worked low-wage jobs to support the family. Her father always held two or three, she says. She was the only black student in her elementary school, she told me, and her early experiences with racism and sexism imbued in her a desire to fight for equality. Things didn’t get any easier when she began to grapple with her sexuality in high school and college. “People said things. I got denied opportunities solely on the basis of my race or my gender. Overt racism was still very much on the table,” she says. “I had in me from an early age the need and a desire for fairness and for justice.”

During the 1980s, Lightfoot worked her way through the University of Michigan. She later attended law school at the University of Chicago and remained in the city, where she now lives with her wife and their 10-year-old daughter. After several years in private practice, Lightfoot served a stint as a federal prosecutor before going to work in city government. She ran the Chicago Police Department’s Office of Professional Standards, a civilian unit that investigates complaints of police misconduct. Later, she served as chief of staff and as general counsel at the Office of Emergency Management and Communications, which runs Chicago’s 911 call center. Richard M. Daley, Emanuel’s predecessor, tapped her to head the city’s Department of Procurement Services and revamp its minority- and women-owned business program. She ultimately returned to the law firm Mayer Brown, where she is a partner.

Preckwinkle, meanwhile, has touted her work as Cook County Board president to stop charter school expansions and advocate affordable housing. Preckwinkle is also chair of the county Democratic Party. However, Preckwinkle’s strong political ties received flak during the campaign, when she was criticized for the fundraising support she received from Edward Burke, an alderman who was arrested by the FBI on corruption charges.

Lightfoot was a frontrunner early in the campaign, and it was unclear what kind of challenge more well-known figures like Preckwinkle might mount. Apparently, that competition wasn’t enough to knock her out of the race. The runoff election will be held April 2.