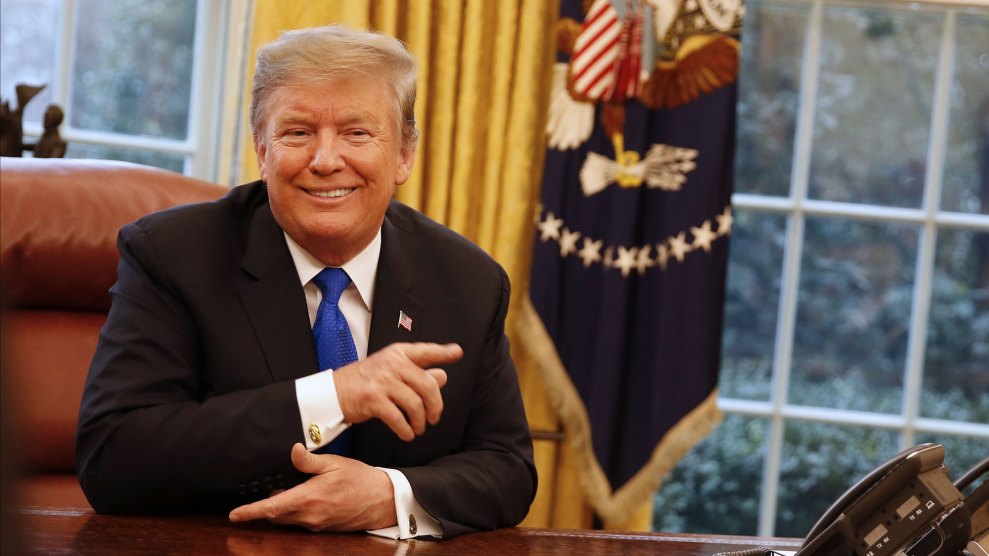 Ah, Sundays in the Trump White House: a time to catch up on sleep, make a pot of coffee, and linger over the morning newspaper (Melania goes for the Travel section; Don reaches for the Sunday Styles).

If only! President Donald Trump spent his Sunday morning in his own unique way, tweeting away about his admiration for the worst people in the world. This time it was North Korean leader Kim Jong-un, whom Trump is scheduled to meet in Vietnam to discuss, as Trump put it, “Denuclearization?” Boasting of his “great relationship” with Kim, Trump called the brutal dictator an asset to his country with a potential for great things:

Chairman Kim realizes, perhaps better than anyone else, that without nuclear weapons, his country could fast become one of the great economic powers anywhere in the World. Because of its location and people (and him), it has more potential for rapid growth than any other nation!

Conducting diplomacy with dictators is sometimes just part of the job, but Trump is unique in his insistence that the brutal dictators he’s conducting diplomacy with are, in fact, good people. He’s touted his “great relationship” with Rodrigo Duterte of the Philippines, who is best known for his mass murder of drug users (Trump specifically praised him for his approach to the Drug War).

No dictator has come in for as much incongruous praise as Kim. “He speaks and his people sit up at attention,” Trump said of Kim last year. “I want my people to do the same.” Later that year, describing their correspondence on binational talks, Trump said: “We went back and forth, then we fell in love. He wrote me beautiful letters.” Trump’s admiration, he explained, stemmed from Kim’s ability to consolidate power at such a young age—something Kim was able to do through a campaign of assassinations and terror.

Such praise comes with a cost. As my colleague Dan Spinelli noted, during Trump’s push for a nuclear deal with North Korea—with visions of a Nobel Prize dancing in his head—his administration has swept under the rug the slave camps and forced starvation that Kim’s regime has maintained.