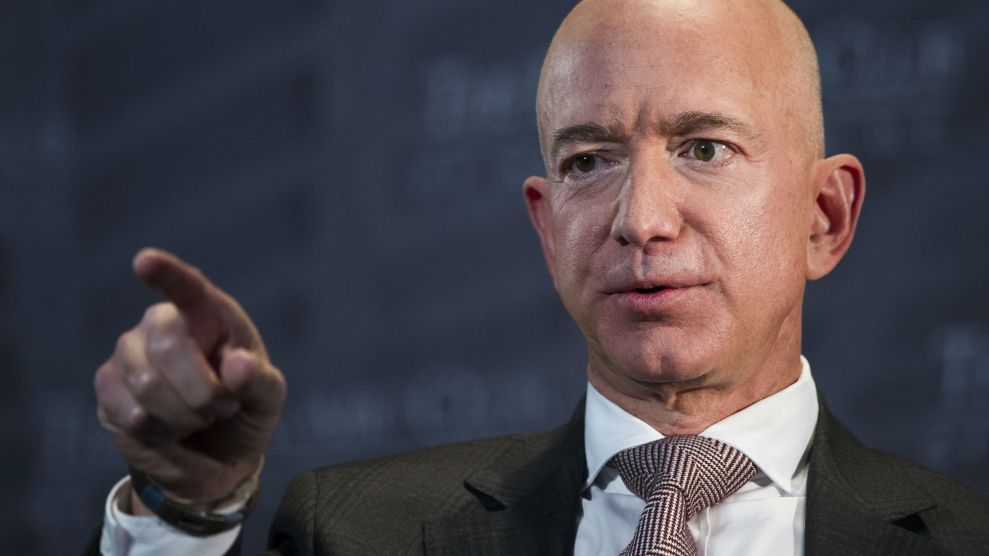 Jeff Bezos, the billionaire CEO of Amazon and owner of the Washington Post, just accused the National Enquirer’s parent company, AMI, of blackmailing him with personal photos—a.k.a dick pics—in a Medium post on Thursday. According to Bezos, the National Enquirer told him, via the attorney of an investigator Bezos hired, it would publish the photos unless he stopped investigating how they obtained text messages sent from Bezos to his mistress. The National Enquirer published those photos weeks ago. Bezos says AMI lawyers also demanded he tell the press that he has “no knowledge or basis for suggesting that AMI’s coverage was politically motivated or influenced by political forces.”

The National Enquirer, which is run by Trump-supporter David Pecker, has been linked to the president for its controversial role in preventing embarrassing stories of Trump from going public through so-called “catch-and-kill” operations.

In his blog post, Bezos writes, “If in my position I can’t stand up to this kind of extortion, how many people can?” So, he published the alleged emails from National Enquirer executives with the blackmail instructions.

Here’s an email, allegedly from Dylan Howard, the chief content officer at AMI:

I am leaving the office for the night. I will be available on my cell — 917 XXX-XXXX.

However, in the interests of expediating this situation, and with The Washington Post poised to publish unsubstantiated rumors of The National Enquirer’s initial report, I wanted to describe to you the photos obtained during our newsgathering.

In addition to the “below the belt selfie — otherwise colloquially known as a ‘d*ck pick’” — The Enquirer obtained a further nine images. These include:

· Mr. Bezos face selfie at what appears to be a business meeting.

· Ms. Sanchez response — a photograph of her smoking a cigar in what appears to be a simulated oral sex scene.

· A shirtless Mr. Bezos holding his phone in his left hand — while wearing his wedding ring. He’s wearing either tight black cargo pants or shorts — and his semi-erect manhood is penetrating the zipper of said garment.

· A full-length body selfie of Mr. Bezos wearing just a pair of tight black boxer-briefs or trunks, with his phone in his left hand — while wearing his wedding ring.

· A naked selfie in a bathroom — while wearing his wedding ring. Mr. Bezos is wearing nothing but a white towel — and the top of his pubic region can be seen.

· Ms. Sanchez wearing a plunging red neckline dress revealing her cleavage and a glimpse of her nether region.

It would give no editor pleasure to send this email. I hope common sense can prevail — and quickly.