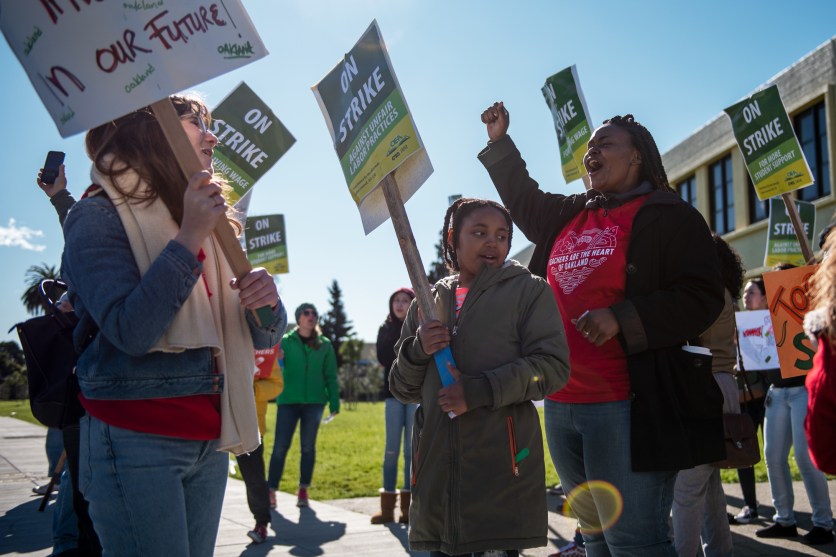 Last week, before thousands of Oakland teachers went on strike to call for more pay and smaller class sizes, teachers’ union president Keith Brown asked parents and community members to join educators “in support of quality schools.” For parents, one way to do that is to keep kids home from understaffed schools, an act that carries consequences for the school district: Every day a student doesn’t go to class, the district loses state funding.

Through the first two days of the strike, attendance at schools citywide appeared sparse. In fact, Brown’s union estimated that just 3 percent of the city’s 37,000 students attended school on Friday.

But working families still need a place for kids to go while their teachers are out protesting. Across the city, churches have opened their doors to kids and provided free lunches for them. The iconic Grand Lake Theater has offered $1 movie showings for children. The kids theme park Fairyland and the Oakland Museum of California were free late last week, and the Oakland Zoo donated free passes. And beyond that, teachers and parent groups have collaborated to create dozens of so-called solidarity schools in libraries, co-ops, recreation centers, and homes for parents who didn’t have an alternative source of child care.

“It’s kind of like a child care co-op where parents have banded together to watch their children, and then they are going to rotate because they are preparing to have their kids home for multiple days,” Kimi Lee, the executive director of the grassroots organization Bay Rising and a parent who helped organize for her children’s classmates at Melrose Leadership Academy, told me. “We’ve got 35,000 kids to figure out what to do with.”

On Friday, I dropped in on a solidarity school site in North Oakland, at the Bushrod Park recreation center. The center is located next door to Sankofa Academy, a public elementary school, and was set up as a joint site for up to 75 students from Sankofa and nearby Peralta Elementary School. When I arrived, I was greeted by Sankofa parent Anne Mills, a stay-at-home mother who was helping organize lunches for the dozen or so kids scurrying around the rec center.

Mills’ daughter Charlotte is one of the few white students at Sankofa, where nearly three-quarters of students are black and 90 percent of students receive free or reduced meals. (Compare that to Peralta, which is just blocks away but where 60 percent of students are white and only 18 percent receive free or reduced meals.) As Mills worked to sign kids in, many of the mostly black and brown children headed outside to the playground. Some played basketball on the black-and-yellow court that was recently refurbished and dedicated by Golden State Warriors star Stephen Curry, while others played foosball or Uno in the Education Lab that Curry and his wife commemorated late last year. At one point, a music teacher stopped by to teach a class. On Friday, 18 kids showed up at the Bushrod site; on Monday, that number jumped to 51.

For parents at Peralta and Sankofa, the planning began in late January, when 50 people showed up at a meeting at the home of Peralta parent Kira Don. Back in the 1980s, when Don was a student at Peralta, her family had hosted a strike school at their house during a work stoppage, just as other families in the neighborhood had. Teachers from Peralta would hold classes, and the community raised money to help pay for them. “In ’96, when Peralta did a strike school, it was in a church basement,” Don says. “We wanted to make it in a space, not in private homes, so that it felt more open and accessible, especially since we were sharing the space with a second school.” Ahead of this year’s strike, parents from Peralta sent emails to coordinate, drafted leaflets, and passed them around to parents when they dropped their kids off at Sankofa.

Because of their proximity and the vastly different racial makeup of their student bodies, Sankofa and Peralta are often compared to one another; in 2017, as the district considered a controversial plan to merge or close nearly two dozen schools, a school board-commissioned report floated the idea that Sankofa combine with Peralta. That didn’t go forward. But this year, Sankofa families were thrown into uncertainty when, in January, the district proposed merging the school with Kaiser Elementary, a small school in the Oakland hills where just 22 percent of students are black and 34 percent are white. The idea has sparked outcry from some parents at Kaiser who are trying to stop the merger from happening.

When Mills talked to some Sankofa parents, she says there was interest in the possibility of what could come next. “They see that Sankofa doesn’t have the resources that other schools do, just in terms of how much parents raise,” Mills said. “Some sort of merger or closure has been hanging over Sankofa for a long time.”

“The idea is that we stand in solidarity with our teachers. They’re fighting not just for higher wages but for better conditions for our kids.”

Mills stopped to see if there were enough people supervising the kids out on the playground. Eventually, she helped get them settled to eat lunches she’d been organizing earlier, which were donated by the Democratic Socialists of America as part of their Bread for Ed campaign: peanut butter and jelly sandwiches, broccoli, carrots, and potato chips. (Mills did her best to keep the chip eating to a minimum.)

With no end in sight for the strike, Mills told me that the next challenge would be to find another site to offer full-day care for students once the strike school hours end in the afternoon. That way, volunteers can walk students from Bushrod to the next site to give parents more time for daycare. It wasn’t going to be an easy problem to solve.

“The idea is that we stand in solidarity with our teachers. They’re fighting not just for higher wages but for better conditions for our kids. It’s all our struggle, too,” Lee, the East Oakland parent organizer, told me ahead of the strike. “As parents, we have a duty to get involved in that. We can’t just leave it to the teachers to carry this weight and be the only ones fighting to keep public education alive.”