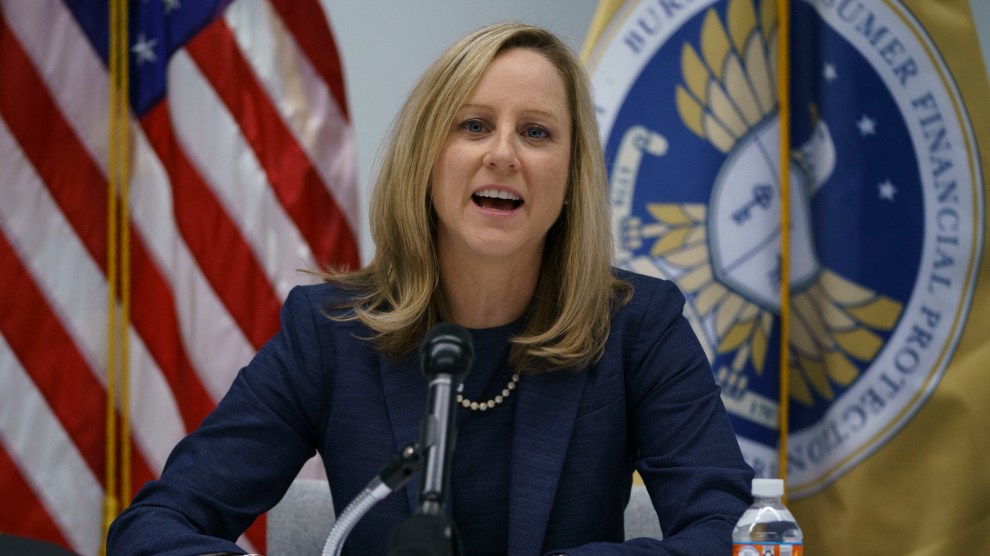 “A bad move that will hurt the hardest-hit consumers.”

In an afternoon press release, the Consumer Financial Protection Bureau said it would rescind the core of the rule, a provision requiring payday lenders to assess a borrower’s ability to pay back debt before making loans to low-income customers. The bureau argued that the provision curtailed “access to credit and competition in states that have determined that it is in their residents’ interests to be able to use such products.”

But consumer advocates say the CFPB’s move hands a victory to payday lenders. Such lenders charge astronomical interest rates—as high as 950 percent—on quick-access installment loans. They argue that removing the requirement that lenders assess debt repayment ability leaves them free to repeatedly issue loans to the neediest consumers, collecting an ever-growing mix of interest or late-payment fees and trapping the borrower in debt. The CFPB’s former director, Richard Cordray, called the change “a bad move that will hurt the hardest-hit consumers.”

Sen. Sherrod Brown (D-Ohio), the ranking member of the Senate Committee on Banking, Housing, and Urban Affairs, said in a statement that “Eliminating these common sense protections will result in millions of hardworking families trapped in a cycle of debt and poverty. The CFPB is helping payday lenders rob families of their hard-earned money.”

The decision to weaken the payday lending rule was first proposed by acting director Mick Mulvaney, who now serves as President Donald Trump’s acting chief of staff. Mulvaney—who once proposed legislation to eliminate the bureau and has called the CFPB a “sick, sad joke”—led the bureau from November 2017 to this past December. Mulvaney, who has concurrently been in charge of the White House Office of Management and Budget (OMB), is a longtime friend of the payday lenders. (The industry donated more than $60,000 to his campaigns when Mulvaney was a congressman from South Carolina.) While in charge of the CFPB, Mulvaney quietly closed investigations and scrapped lawsuits aimed at payday lenders around the country.

Mulvaney’s successor, Kathy Kraninger, took over the bureau just before the new year. She came to the CFPB from the OMB, where Mulvaney had served as her boss. Last month, she signaled that the bureau would likely scrap chunks of the rule. The proposal lifting the restrictions will be open to the public for comment for the next 90 days.