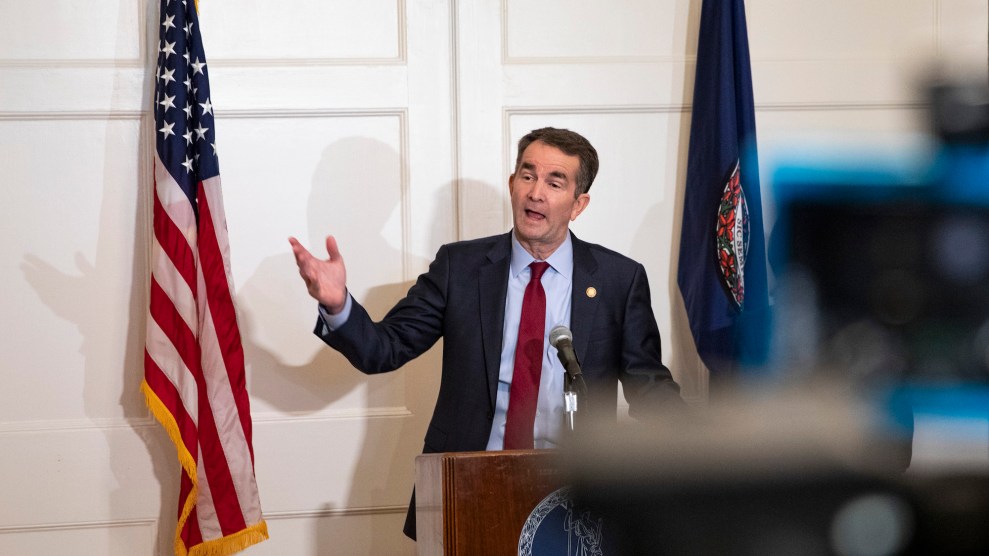 Ralph Northam is all alone. The Virginia governor, a Democrat, is under fire after it was revealed a photo on his medical school yearbook page showed a person in blackface standing next to one dressed as a Klu Klux Klan member, did not quell the controversy Saturday with a widely-panned press conference. In it, Northam denied being in the photo,  but admitted he once wore shoe polish on his face to impersonate Michael Jackson at a 1984 dance party. He apologized profusely.

The governor’s statements failed to head off calls by leading Virginia and national Democrats for Northam to step down. Late on Saturday, three of the state’s top Democrats—Senators Mark Warner and Tim Kaine, and Rep. Robert Scott—announced they had urged him to quit: “We no longer believe he can effectively serve as the governor of Virginia and that he must resign.’”

“The press conference did not help,” former Senator Claire McCaskill, now an analyst for NBC News, tweeted. ”Made it worse. Our party is united in asking for resignation.”

Even President Donald Trump joined the criticism of Northam, tweeting Saturday evening that the governor’s reversal on whether he was in the photo was “Unforgiveable!” Trump also faulted the failed campaign of Northam’s 2017 opponent, Republican lobbyist Ed Gillespie, saying Gillespie’s opposition research staff had failed him. “If they find that terrible picture before the election, he wins by 20 points!” Trump asserted.

Trump’s tweets come despite the president’s own history of racist rhetoric, including infamous comments in which he said racist demonstrators in Charlottesville, Virginia who denounced Jews and African-Americans included “fine people.” Trump followed that claim by decrying the removal in Virginia of “beautiful statues and monuments” to Confederate generals. Many analysts suggested the ensuing controversy aided Northam’s 2017 bid.

If Northam were to resign, he’d be succeeded by Justin Fairfax, who was elected lieutenant governor in 2017 alongside Northam, becoming only the second African-American to win statewide office in Virginia. Fairfax called the yearbook picture “abhorrent, vile and racist” but has stopped short of calling for Northam to resign.