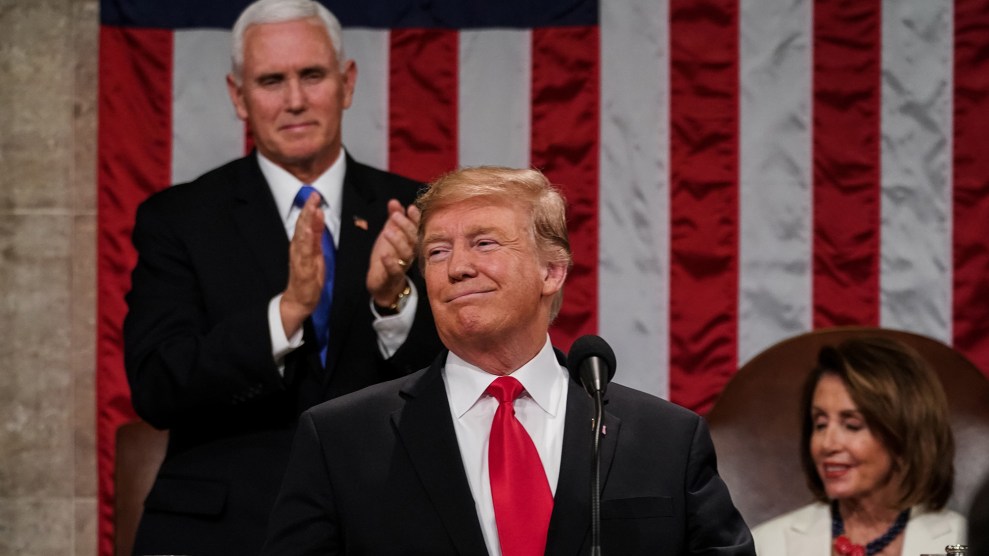 In the State of the Union address Tuesday night, President Donald Trump made at least one bold pledge that should garner bipartisan support: to end the transmission of HIV by 2030.

While ambitious, both advocates and experts believe the goal is largely achievable, in theory, due to great strides in medical advancements and outreach as well as the many local initiatives already underway. The key, of course, will be the follow-through.

“I’ve been doing this since the epidemic first began,” said Dr. Paul Volberding, director of the University of California-San Francisco’s AIDS Research Institute and one of the world’s leading experts on AIDS. “And to see us getting to the point where we really do have the tools…we have to be really excited by this possibility.”

The speech Tuesday was incredibly light on details—”My budget will ask Democrats and Republicans to make the needed commitment to eliminate the HIV epidemic in the United States within 10 years,” the president said before moving on—but last night, Health and Human Services Secretary Alex Azar also released a general road map focused on targeting geographic hotspots for HIV, using data to drive decision making on the local level, and deploying teams to focus on prevention and treatment.

There’s reason to be optimistic, as the administration’s plan of attack broadly aligns with the recommendations of several experts I spoke with—and in the past the president has seemed supportive of efforts to allocate resources to AIDS prevention, such as when he signed a bill to reauthorize the President’s Emergency Plan For Aids Relief, or PEPFAR, through 2023.

“We have to be really excited by this possibility.”

Most essential to realizing this lofty goal is treating everyone who is already infected with HIV as soon as possible. If properly treated with antiretroviral therapy, HIV in a patient’s body can be lowered to undetectable levels,  effectively eliminating the risk of transmission. Second, it’s crucial to improve access to increasingly effective preventative medicines like the pill Pre-Exposure Prophylaxis (PrEP).

In addition to highlighting these priorities, the HHS strategy calls for funding local HIV HealthForces, on-the-ground teams working to expand prevention and treatment, and increasing support for community health centers.

All this will take significant new investment, though, and the HHS fact sheet was almost as vague as the president in this regard—only calling for “an infusion of resources.” While it’s difficult from the outside to assess what that number would need to be, some experts told me that they expect it should be in the hundreds of millions of dollars at least. “The things that were identified in the fact sheet are important, but until that information [on funding] is available, it’s not clear what is going to change,” says Jen Kates, director of global health and HIV policy at the Kaiser Family Foundation.

The goal of ending HIV transmissions in the U.S. by 2030 is a one that is tough but possible. Will await more detail to see if this will mark a bold, new domestic HIV initiative.

While the plan seems promising, it’s important to be skeptical given this administration’s past unfulfilled promises, from the border wall to public health issues like the opioid crisis, and even some of its top players’ history responding to the epidemic. Vice president Mike Pence, as governor of Indiana, ignored public health officials’ warnings about the state’s HIV outbreak, opting at first “to pray” instead.

What’s more, many of the Trump administration’s current policy priorities actually run counter to HIV treatment efforts. “Some of the administration’s proposals around HIV are in tension with some of their proposals at large,” says William McColl, vice president for policy and advocacy at AIDS United, a nonprofit dedicated to ending the AIDS epidemic. “There’s this need to move forward on HIV while rolling back health care more generally, and I think that’s something that the administration is going to have to figure out how to resolve.”

In repeatedly attacking the Affordable Care Act, which instituted important protections for those suffering from chronic illnesses like HIV, the administration has targeted the people it says it wants to now help. Significantly more people with HIV had insurance coverage after Medicaid expansion, and cuts to Medicaid can limit people’s access to crucial continual care in some states. The administration has also proposed a Medicare rule that would change prescription drug policies protecting certain medications, including antiretrovirals used by HIV patients. “We have major concerns that that [rule] would create a situation where people have less access to the necessary medication,” McColl says.

Another reason to be skeptical of the plan’s success is how the Trump administration has approached the individual and often marginalized communities most affected by HIV. There are more than 1 million people living with HIV in the United States. While there were more than 38,000 new infections in 2015, that number declined 8 percent between 2010 and 2015, and the HIV death rate has declined 80 percent since its peak. But progress has been far from uniform. Just 10 states accounted for almost two-thirds of new HIV diagnoses in 2017. (Washington, DC, has the highest rate in the nation.) Regionally, about half of diagnoses occurred in the South. Since the beginning of the epidemic, communities of color and those identifying as LGBTQ have been disproportionately affected, and that is still the case today.

“The things that were identified are important but until that information [on funding] is available, it’s not clear what is going to change.”

Traditionally, in the context of the AIDS epidemic, African American and Latino communities in particular have struggled with lack of outreach and access to care, as well as cultural stigma. For example, while the message that PrEP is a very effective prevention tool has widely reached the white gay male population, that isn’t so true for other at-risk communities, according to McColl. Expanding and targeting outreach to these groups and including community representatives and local health care providers in decision making and policy development will be a necessary component of any successful strategy.

Trump’s 10-year plan says it will target the country’s most at-risk populations, focusing on “hotspots” in the epidemic, specifically the 48 most affected counties, as well as Washington, DC; San Juan, Puerto Rico; and seven states with high rural HIV burdens.

But still, attempts to actually reach those most affected will almost certainly be undermined by the administration’s consistent efforts to roll back protections for the LGBT, immigrant, and minority communities. “There seems to be goodwill on the part of several people working at [the Centers for Disease Control and Prevention] and [the National Institutes of Health] and parts of HHS to really tackle HIV in the US,” Kates says. “But the larger context is that the administration has tried to scale back access and protections for the various populations that are either living with HIV or at risk.”

Since taking office, the Trump administration has taken several steps to weaken nondiscrimination protections for sexual orientation and gender identity, including allowing health care providers to refuse to perform certain procedures or care for some people based on religious or moral objections. And on race and immigration, Trump’s record is just as dismal. Draconian policies have scared legal and illegal immigrants away from seeking health services, and the president’s repeated failure to defend the African American community in situations from Charlottesville to the NFL to Black Lives Matter further alienates a group that is essential to eradicating HIV transmissions. If affected people fear they will face discrimination for their sexual orientation or race or immigrant status, they may be discouraged from interacting with the health care system no matter what it’s offering. “It runs counter to efforts to get people to trust the medical system, to get the care they need, to not face barriers or stigma or discrimination when they go to get care,” Kates says.

“The larger context is that the administration has tried to scale back access and protections for the various populations that are either living with HIV or at risk.”

To have a chance of overcoming these setbacks, those overseeing the national strategy must ensure that the most vulnerable communities are involved at every level of deployment.

“It’s one of the lessons from the HIV epidemic that has changed the way health is looked at,” Kates says. “Involving the very people that are affected and at risk is really critical to everything from program design to outreach to implementation to assessment and to gaining the trust of the communities that you’re trying to reach. So having community involvement is essential to how HIV work has been done and has been successful in this country and around the world.”

On the bright side, many in HIV/AIDS prevention circles have praise for the man thought to be one of the masterminds behind the strategy, CDC director and HIV specialist Robert Redfield. While the strategy was only just announced, Redfield has long been vocal about pursuing eradication. “[He] has been at this for a very long time,” says Volberding, who has known Redfield for decades. “Especially with this kind of program, it’s just the way he thinks, and I think it says a lot about him and the strategies we have now to make a real impact on this epidemic.”

Still, it remains to be seen how much money will be invested in the plan and whether the president’s conflicting policies will stand in the way of its success. The administration will release its budget in March, and Kates hopes to see increased investment in the Ryan White program, which provides grants to support low-income HIV patients, as well as the prevention program at the CDC, both of which have been flat-funded for years.