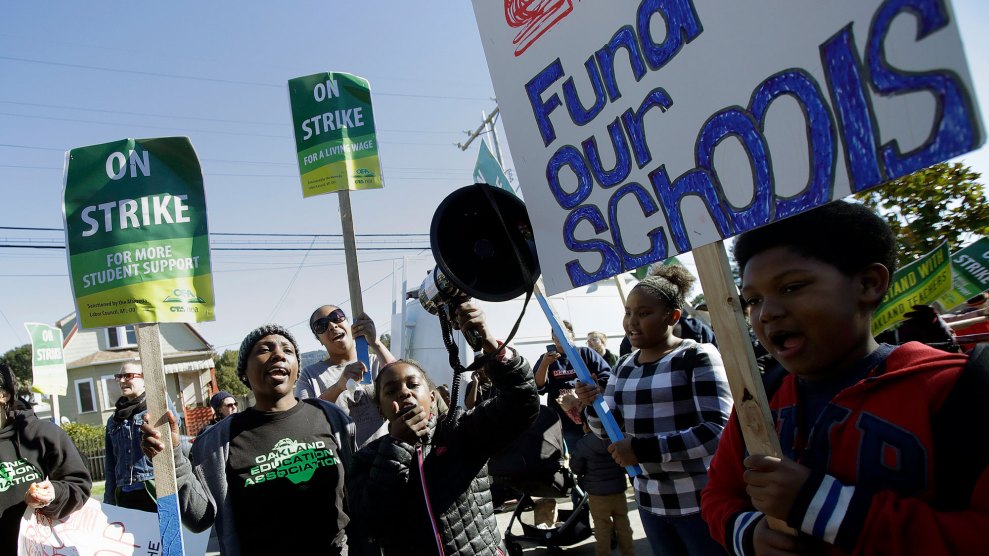 On February 20, just before Oakland’s teachers went on strike, Carmelita Reyes organized a carpool of 35 city principals to travel to Sacramento to meet with state lawmakers. Their plan: to urge legislators to spend more on schools, cancel the Oakland Unified School District’s $36 million in outstanding debt, and revise the state’s laws on charter schools.

A day before the trip, Reyes, the co-principal of Oakland International High School, had laid out their argument in an open letter to the state that she’d written with 74 other school leaders. “If our education budget is a reflection of our values, then we are morally bankrupt when it comes to our children,” they wrote. That letter echoed a San Francisco Chronicle op-ed written in early February by Oakland school board president Aimee Eng and board member Jody London, who warned that the district’s issues “will be the problems that far too many California school districts will face in a few years if the state does not step up to solve the basic problem: inadequate funding.”

“If our education budget is a reflection of our values, then we are morally bankrupt when it comes to our children.”

When the principals got to Sacramento—dressed in red in a nod to the #RedForEd teacher protests that swept the nation last year—they split up and met with lawmakers, staffers, and Superintendent of Public Instruction Tony Thurmond. Cliff Hong, the principal of Roosevelt Middle School, said he left the capitol that day feeling empowered, noting that legislators offered “some assurances” they would spend more money on education.

Now comes the hard part. The recent strikes in Los Angeles and Oakland are over, with teachers winning raises and calls for checks on charter schools, among other things, in negotiations with their school districts. But an even bigger statewide battle—fighting back Proposition 13, the four-decade-old ballot measure that has stripped California of much-needed property tax revenue—is just kicking into gear.

Passed in the midst of the taxpayers’ revolt in 1978, Prop. 13 cut and capped property taxes for residences and businesses. The measure also ensured that residential and business properties are taxed at a rate of just 1 percent based on when the property was bought, with an additional cap on how much it can be increased each year. As a result, many people and businesses are paying taxes that correspond to decades-old appraisals rather than the property’s present-day value.

Before Prop. 13, California school districts had largely depended on property taxes to fund schools. After Prop. 13 was passed and the property tax rate was slashed, the state essentially had to step in to fill the gap in lost revenue. If districts needed to raise taxes to fund schools, two-thirds of voters needed to approve it; for example, following the strike in Los Angeles in January, the city’s Board of Education voted to put a parcel tax on the June ballot that would raise $500 million a year in revenue for schools.

In 1988, amid concern over low funding, California voters approved Proposition 98, which established a minimum school spending amount that the state must meet each year. But the restrictions from Proposition 13 makes it difficult for local school districts to raise funds to make up the difference between what the state provides and what schools need.

“It really defunded the school system,” Reyes said of Prop. 13. “I don’t think that was the intention of the average voter when they voted for it.” She described the impact as “death by 1,000 cuts.” “It’s happened so slowly,” she said. “Schools were so well funded in the ’70s. And then, every year it was like a little less, a little less, a little less, that they didn’t realize how bad it had gotten. But it’s really, really bad. And it shouldn’t be that way.”

The California Teachers Association, as well as local unions in Oakland and Los Angeles, have endorsed a 2020 ballot measure that organizers hope will reform Prop. 13 and bring in more revenue for schools. The initiative, if passed, would keep rules on residential taxes in place and create a so-called split roll system that could make businesses and corporations pay higher taxes.

“There’s no reason that California shouldn’t be the state that spends the most on students.”

“There’s no reason that California shouldn’t be the state that spends the most on students,” says Jeff Good, executive director for United Teachers Los Angeles, LA’s teachers’ union and one of the measure’s sponsors. “We claim pride around our progressive values and belief in the working class. Yet we continue to starve our schools and expect results that go beyond what’s reasonable based on the investment that our state is making.”

California Gov. Gavin Newsom appears receptive to the call for more state funding. When asked during his gubernatorial campaign about reforming Prop. 13, Newsom said that “everything is on the table.” In his state of the state in February, Newsom said that even though his budget called for an additional $80 billion for schools next year, it wasn’t enough. “Something needs to change,” he told lawmakers. “We need to have an honest conversation about how we fund our schools at a state and local level.” And as Newsom considers revamping the state’s tax system, he has said he wanted to use the Prop. 13 reform initiative “as an exercise in bringing the parties together to see if we can compromise on a more comprehensive tax package.”

Thurmond, who stepped in as a mediator between Oakland teachers and the district during the strike, said in a statement after the strike that he was committed to work with the governor and lawmakers in “identifying new and permanent funding sources to help districts lower class sizes, increase staff, and support students, teachers, and parents throughout the entire state.”

Days after principals took their trip to Sacramento, a dozen Oakland teachers took their own trip to Sacramento to meet with lawmakers and make their own case for more funding. Hong, the Roosevelt Middle School principal, told Mother Jones that Oakland principals have started to communicate with others across the state to get organized and felt optimistic that they could “get some movement” in lobbying for more school funding and changes to Proposition 13.

“It’s infuriating to know that although California has all the money in the world and plenty of resources,” Reyes said, “we have dedicated so little to our students when other states have not made that decision.”