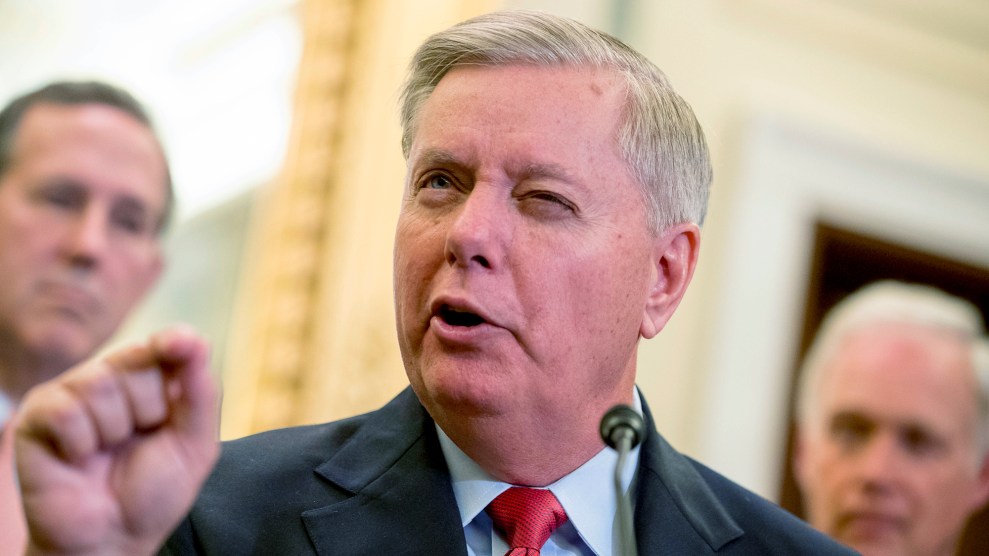 Senate Democrats are ramping up their push for gun control, calling on a key GOP lawmaker to hold hearings on legislation to expand background check requirements for firearms purchases. In a letter to Sen. Lindsey Graham (R-S.C.), who chairs the Senate Judiciary Committee, more than three dozen Dems said on Wednesday that “universal background checks save lives” and are supported by the vast majority of Americans. “We respectfully request that you hold a hearing on this critical legislation as soon as possible,” said the letter, which was spearheaded by Sen. Chris Murphy (D-Conn.), one of Congress’ most vocal gun reform advocates.

Last week, the House of Representatives passed legislation requiring background checks for every gun sale. Though the bill sailed through the Democrat-controlled House, it’s unlikely to pass the GOP-dominated Senate, where Republicans have long refused to hold votes on gun control measures. Today, Senate Democrats are beginning a push they hope will encourage their Republican colleagues to follow the House’s lead.

Graham took the helm of the committee earlier this year, and has shown more interest in addressing gun issues than his predecessor, Sen. Chuck Grassley (R-Iowa). In the wake of the 2018 school shooting at Marjory Stoneman Douglas High School in Parkland, Florida, Graham worked with Sen. Richard Blumenthal (D-Conn.) on a “red flag” bill designed to prevent individuals who pose a risk to themselves or others from accessing firearms.

In 2013, the last time the Senate voted on the issue, Graham opposed a bipartisan bill to expand background checks. And on the eve of last week’s House’s vote, he told Politico that the current bill would be dead on arrival in the Senate. Still, he opened the door to holding a hearing on the subject. “We’re going to have a hearing about ‘red flag’ legislation,” Graham said. “I just want to work on the red flag stuff and maybe the background check stuff. We’re kind of going our own way.”

Wednesday’s Democratic letter called attention to that openness. “We noted with interest your statement in the press that you intend to have the Committee work on ‘red flag’ legislation and potentially also background checks, both actions we would strongly support,” they wrote.

Expanding background checks has been a top priority for Democrats in the wake of the Parkland massacre. Polls have consistently found that more than 90 percent of voters support the move. Nancy Pelosi (D-Calif.), now the speaker of the House, promised Parkland survivors during the 2018 midterms that the House would vote on universal background checks if Democrats won control of the chamber. And even though the measure could have passed the House without any Republican support, eight GOP lawmakers—most of whom face tough reelection bids in 2020—also voted for the legislation.

But Senate Republicans have not demonstrated a similar willingness to budge. Senate Majority Leader Mitch McConnell (R-Ky.) has not held a vote on any gun legislation since Republicans took control of the chamber in 2015. Last summer, he told Kentucky voters that he doesn’t think the federal government has a role in addressing gun violence, describing any regulation as a “local decision.”

You can read the Democrats’ full letter here: