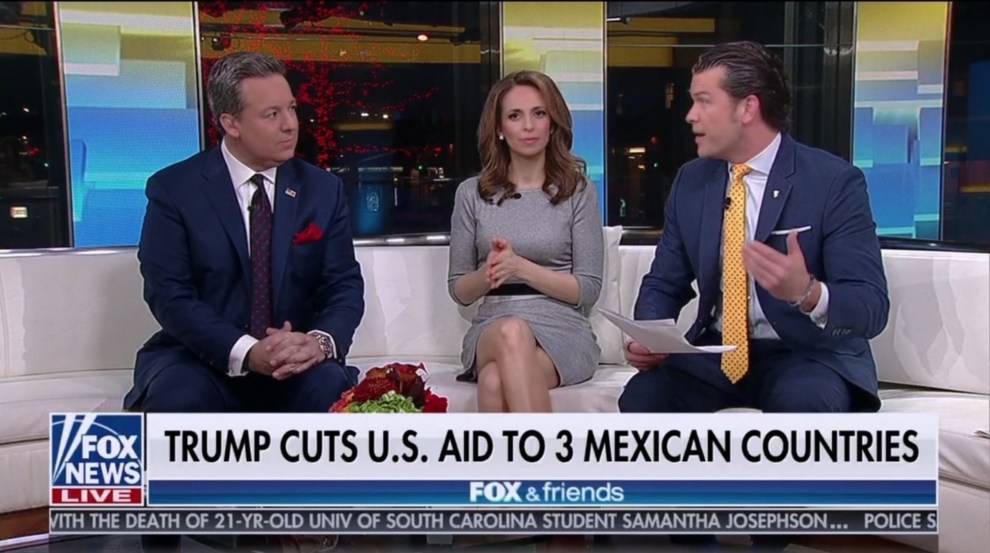 While the hosts of “Fox and Friends” discussed the Trump administration’s decision to cut aid to El Salvador, Guatemala, and Honduras on Sunday morning, the chyron described the three so-called Northern Triangle countries as “Mexican countries.”

How Stupid Is @foxandfriends?

As the Washington Post’s Nick Miroff pointed out on Twitter, the error captures President Donald Trump’s tendency to treat the three countries as the same, despite the obvious differences between them. The number of Salvadoran families traveling to the United States declined dramatically between 2017 and 2018, but Trump never seemed to notice. Family migration from El Salvador has increased this year, but there are still far more families coming from Guatemala and Honduras.

Ed Henry, one of the co-hosts, quickly apologized for the mistake. “We had an inaccurate graphic onscreen while talking about this very story,” he said. “We just want to be clear, the funding is being cut off to the three Central American countries. We apologize for the error—it never should’ve happened.”

It’s all just one undifferentiated mass of Mexicos down there

Trump has long threatened to cut off aid to the region but Congress has continued to provide funding. As of Friday, the Trump administration appears to be redirecting that money unilaterally. “I’ve ended payments to Guatemala, to Honduras and El Salvador,” Trump said during a visit to Florida. “No more money is going there anymore.” The State Department confirmed on Saturday that “at the Secretary’s instruction, we are carrying out the President’s direction and ending…foreign assistance programs for the Northern Triangle” from the 2017 and 2018 fiscal years. There is nearly $500 million left over from 2018, according to the Washington Post.

The move came despite the fact that Homeland Security Secretary Kirstjen Nielsen had announced a “historic” cooperation agreement with Northern Triangle countries on Thursday that aims to address the root causes of migration and prevent additional migrant caravans from forming. DHS provided few specifics about the agreement.

Trump incorrectly believes that Northern Triangle countries are “sending” people to the United States, which has led him to punish the leaders of those countries until they agree to prevent their people from crossing the US-Mexico border. In reality, Northern Triangle presidents, who have worked closely with the United States, have little control over whether their citizens leave.

Trump also appears to fundamentally misunderstand how that foreign assistance money is administered. Jim Nealon, a former US ambassador to Honduras, explained to the Post that the United States doesn’t just hand over money to foreign governments. Instead, he said, the aid money funds “programs designed and implemented by the US, with the cooperation of governments and civil society.” Much of the funding is designed to address the intense poverty and violence that pushes people to migrate to the United States in the first place.