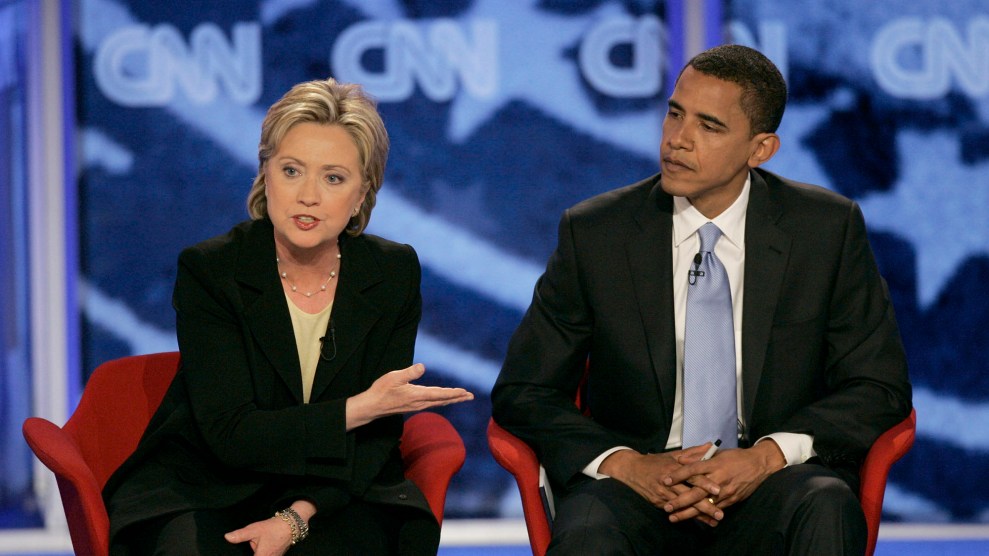 When Mark Penn visited the White House last month to advise President Donald Trump on polling, it wasn’t exactly a surprise. The former strategist for Bill and Hillary Clinton—who insists he’s still a Democrat—had been loudly defending the president for months. Still, it was jarring to see Penn cozying up to the man who has repeatedly said that Hillary should be in prison.

Then again, Penn has long been comfortable with Trump’s divisive style of politics. Exactly 12 years ago today—as the 2008 Democratic primary campaign was getting started—Penn wrote a remarkable memo outlining his vision for how Hillary Clinton could win the nomination. The document, first reported by Joshua Green in The Atlantic, belittled Obama’s “diverse, multicultural” background and his childhood in Indonesia and Hawaii. Penn suggested subtly drawing attention to Obama’s “lack of American roots” by, among other things, using “our logo to make some flags we can give out”:

All of these articles about his boyhood in Indonesia and his life in Hawaii are geared towards showing his background is diverse, multicultural and putting that in a new light.

It also exposes a very strong weakness for him—his roots to basic American values and culture are at best limited. I cannot imagine America electing a president during a time of war who is not at his center fundamentally American in his thinking and in his values. He told the people of NH yesterday he has a Kansas accent because his mother was from there. His mother lived in many states as far as we can tell—but this is an example of the nonsense he uses to cover this up.

How we could give some life to this contrast without turning negative:

Every speech should contain the line you were born in the middle of America to the middle class in the middle of the last century. And talk about the basic bargain as about the deeply American values you grew up with, learned as a child and that drive you today. Values of fairness, compassion, responsibility, giving back.

Let’s explicitly own “American” in our programs, the speeches and the values. He doesn’t. Make this a new American Century, the American Strategic Energy Fund. Let’s use our logo to make some flags we can give out. Let’s add flag symbols to the backgrounds.

We are never going to say anything about his background—we have to show the value of ours when it comes to making decisions, understanding the needs of most Americans—the invisible Americans.

Clinton, Green noted, “wisely chose not to go this route.” But the context of Penn’s memo was significant. Just two months earlier, in January 2007, Insight magazine—a publication affiliated with the conservative Washington Times—had reported that “researchers connected to” Clinton had discovered that as a child in Indonesia, Obama had attended a madrassa that may have indoctrinated him with radical Islam. The tale ricocheted across the internet and quickly found its way to Fox News. “This is huge!” Fox & Friends’ Steve Doocy famously declared.

The story was completely false. The schools Obama attended in Indonesia were not madrassas. The Clinton campaign flatly denied having anything to do with the smear, telling CNN that it was “an obvious right-wing hit job.” No evidence to the contrary ever emerged. But rumors about Obama’s upbringing and religion persisted, eventually morphing into the birther conspiracy theories that Trump himself would embrace.

Twelve years later, as the most diverse group of candidates ever prepares to embark on another presidential campaign, Democrats look a whole lot more like the party of Barack Obama than the party of Mark Penn.