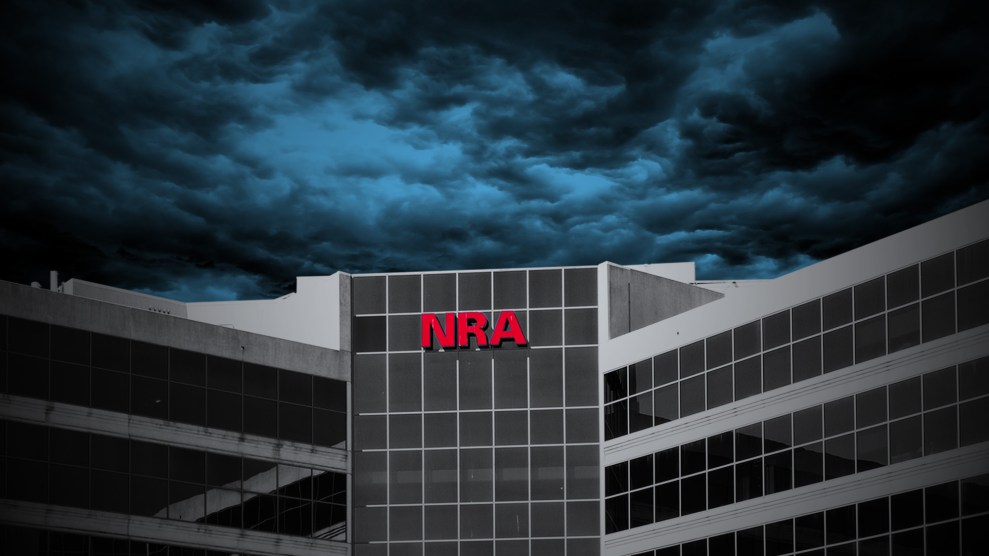 Against the backdrop of a large American flag, Wayne LaPierre, the longtime CEO of the National Rifle Association, opened his speech at this spring’s Conservative Political Action Conference on a familiar apocalyptic note: “Today, we at the NRA awaken each morning to new challenges—threats against our organizations‚ heated and vile political rhetoric, and new forms of opposition that violate the spirit and the letter of the very freedoms our republic was founded to protect.” He then focused on alleged conspiracies by tech companies to silence conservative speech and by the governor of New York to “blacklist” the NRA from doing business with financial institutions.

LaPierre said nothing in his address, however, about the more real ways in which the NRA is under fire. Nine Democratic senators recently called for the Federal Election Commission to investigate whether the gun group illegally coordinated political advertising with several Republican Senate candidates and Donald Trump’s presidential campaign. The NRA’s tax-exempt status is drawing scrutiny from regulators in New York, whose new attorney general remarked last October that the NRA isn’t an authentic charitable organization but “a terrorist organization.” A steady barrage of acrid political commentary from NRA national spokeswoman Dana Loesch and other NRA media figures has stirred a backlash among the organization’s own ranks and reportedly provoked concerns even for LaPierre. There are signs of financial woes, if not for NRA executives. These troubles come as the NRA faces rising opposition from advocacy groups such as Everytown for Gun Safety and Giffords.org, leaders of a national gun-reform movement ignited by the 2012 Sandy Hook massacre and further energized by the teen survivors of last year’s mass shooting at a high school in Parkland, Florida.

The NRA’s leadership also now faces a distinct problem for an organization that has long wrapped itself in the rhetoric of “freedom loving” patriotism. Following investigative reports by multiple news organizations including Mother Jones, the past year has brought deepening federal scrutiny of the NRA’s ties with two Russian operatives: Alexander Torshin, who is suspected of Russian mob activity and money laundering by international authorities and was sanctioned by the US government last year, and Maria Butina, who pleaded guilty in December to a conspiracy charge and has been cooperating with US prosecutors.

The NRA-Russia connection is now a subject of at least five congressional investigations looking into the gun group’s finances and leadership, including a sweeping House Judiciary Committee probe launched earlier this month. US Attorney General William Barr announced on Sunday that special counsel Robert Mueller found no prosecutable conspiracy between the Trump campaign and Russia. But questions remain about Torshin and Butina, including whether they or other Russians may have used the NRA to illegally channel funds into the Trump campaign.

Shortly after hosting a top NRA leader in Moscow, Butina worked against US national security interests by trying to help arm supporters of Vladimir Putin’s military takeover in Crimea.

The core question about Torshin and Butina was about why the two were so eager to build ties with NRA leaders. An answer emerged with Butina’s arrest: They saw the gun group as a prime conduit to powerful Republicans and the party’s presidential nominee. (Butina stated her view in one email uncovered by the FBI that the NRA exerted major influence on the GOP and was “the largest sponsor of the elections to the US congress.”) But that core question can also be flipped around: Why were NRA leaders so eager to build and sustain ties with the pair of Russians?

Ever since Butina was charged in July 2018 with operating illegally as a foreign agent in the United States under Torshin’s direction, the NRA has said little about its extensive contacts with the two, which go back more than seven years. Torshin, who in 2011 befriended the NRA’s then-president David Keene, was personally hosted by Keene and other NRA leaders at six consecutive NRA annual conventions—where Torshin was treated as a “guest of the highest level,” as he noted on Twitter in 2012. In October 2013, Butina told an Israeli gun group that her and Torshin’s fledgling gun-rights organization, the Right to Bear Arms, had a “signed cooperation agreement” with the NRA. That November, Keene made the first of at least two trips to meet with Butina and Torshin in Moscow, where he gave a speech to their group in which he offered to “work together” to advance common interests. At that time, future Trump national security adviser John Bolton—then a member of the NRA’s international affairs subcommittee—recorded a video address to the Russian gun group talking up gun rights, which Butina used to lobby the Russian legislature.

Butina also got to know Keene’s long-time associate Paul Erickson in Moscow in 2013. An NRA life member and veteran Republican operative, Erickson became Butina’s boyfriend and by 2016 sought to establish “back channel” communications between the Trump campaign and the Kremlin. (Erickson was indicted in February on unrelated fraud charges.) Shortly after getting to know Keene and Erickson, Butina worked against US national security interests by supporting Russian President Vladimir Putin’s military takeover of Crimea in spring 2014. As a recent Mother Jones investigation revealed, Butina denounced the Obama administration’s retaliatory sanctions against the Kremlin and traveled to Crimea to advise pro-Russian separatists—including a violent anti-American militia—on how to arm themselves.

Just four weeks later, NRA executives welcomed Butina as a VIP at their 2014 convention in Indianapolis, the first of three she attended alongside Torshin. Following that event, Butina spent time with Keene at NRA headquarters in Fairfax, Virginia, where Torshin had already visited. Butina then returned to Russia, where she continued working in support of Putin’s territorial conquest in Crimea and other disputed parts of Ukraine.

Butina and Torshin attended NRA leadership meetings and elite fundraising events, and hung out with a who’s who of top NRA officials, from past presidents and million-dollar donors to LaPierre himself.

At the NRA conventions, Butina and Torshin attended NRA leadership meetings and elite fundraising events, and hung out with a who’s who of top NRA officials, from past presidents and million-dollar donors to LaPierre himself. In December 2015, a delegation of top NRA leaders and donors traveled to Moscow, where they met with Butina, Torshin, and a Russian gun manufacturer. They also met with Russian government leaders including Foreign Minister Sergei Lavrov and Deputy Prime Minister Dmitry Rogozin, who was among the first Kremlin officials to be hit with US sanctions after the Crimea takeover.

As further details emerged earlier this year about the 2015 Moscow junket, the NRA was compelled to finally break its silence on the matter. A statement from its general counsel depicted the trip as an unofficial visit, asserting that LaPierre had discouraged the current NRA president from going and directed that no paid NRA staffers be involved. The idea, according to a person familiar with the matter, was to suggest that Keene and other prominent NRA figures had acted as freelancers pursuing their own interests abroad. But emails obtained by ABC News indicated that an NRA employee helped make travel arrangements for the delegation, including covering some travel expenses and providing formal “gifts” from the NRA for their Russian hosts.

As part of the Moscow trip, Keene reportedly had wanted to interview Putin for the Washington Times, where he was an opinion editor. The NRA’s then-first vice president Pete Brownell, who was also on the trip, had business interests in Russia through his family’s gun accessories company, according to the New York Times.

Keene did not respond to multiple inquiries from Mother Jones about his relationships with Torshin and Butina, including whether he was paid for his 2013 speech in Moscow. An NRA lawyer said in a statement to Mother Jones that NRA leaders were “unaware” of Butina’s activities with pro-Russian separatists in Crimea and that the organization was otherwise “not in a position to comment on them.” The NRA declined to respond to questions about why several of its top leaders forged ties with Torshin and Butina.

By 2016, Butina was back in the United States, enrolled as a graduate student at American University in Washington, DC. She and Torshin sought connections with the Trump campaign, having already made brief contacts with Trump himself at a 2015 campaign event and at an NRA convention. During the NRA’s annual gathering in Louisville that spring, they tried but failed to meet personally with the future president, but they did hobnob with Donald Trump Jr.

The NRA is cooperating with the House Judiciary Committee probe, according to a statement it gave Politico, and it recently turned over more than 1,400 pages of documents, whose contents are not publicly known.

Whether or not Russian money flowed through the NRA to the Trump campaign has also reportedly been a focus of the FBI, according to McClatchy. The NRA has said that Torshin gave less than $1,000 for his NRA life membership. The organization further said it received only a few small donations from Russians since 2015—clarifying an earlier claim—and that it used no such money to support political campaigns. Its summary of the Russian money it received has been met with sharp skepticism from some congressional investigators: “We don’t believe them,” one Senate source recently told Mother Jones.

The full story of the gun group’s relationship with agents of a major foreign adversary remains unknown. And for now, the typically outspoken and combative NRA is mostly keeping quiet about it.