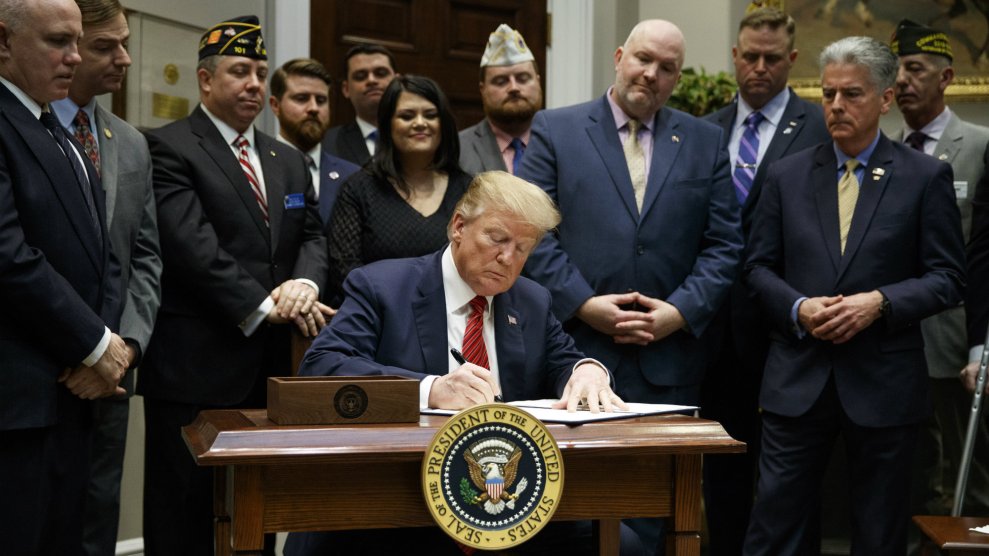 Last week was not filled with positive moments for President Donald Trump. After leaving a failed diplomatic summit with North Korea and weathering harsh congressional testimony from his former lawyer, the president began this week by shifting attention to one of his favorite issues: veteran suicide.

During the campaign, he spoke frequently—if not always sensitively—about the mental health of service members returning from war. As president, he drew backlash for calling David Long, a Marine veteran who killed 12 people last year at a California bar, a “very sick puppy” who “saw some pretty bad things.” (The leader of a veterans’ organization said at the time that Trump’s comments “perpetuate a false and damaging narrative that veterans are broken and dangerous.”)

But on Tuesday, he signed the second executive order of his presidency geared toward upgrading mental health care for veterans. “We must keep our promises to those who keep us free,” he said during a signing ceremony at the White House. Veterans are twice as likely as civilians to die by suicide, even as Trump and his predecessors have funneled more money toward prevention. The progress made by the Department of Veterans Affairs under Trump on prevention is difficult to quantify, given that the department has only released veteran suicide figures through 2016.

Trump’s order aims to make some kind of headway toward better collaboration among federal agencies by establishing a task force to coordinate suicide prevention efforts between the VA, the Pentagon, and other Cabinet departments, but is fairly vague on details. Within one year, the group is supposed to create a “national public health roadmap” to better tackle the issue, a senior administration official told reporters Tuesday morning. The program is expected to include grants to state and local governments.

The White House would not say how the program will be funded or if it will draw upon existing VA dollars. “It’s unclear at this point,” the official said. “The thought is that it would [be] a new appropriation. And it’s unclear; it hasn’t been developed yet.”

The VA’s most recent budget request included $8.6 billion for veterans’ health care, a 5.8 percent increase from the prior year, and nearly $200 million for prevention outreach. But mismanagement and systemic turmoil have blunted the department’s most aggressive recent efforts to combat suicide. By September of last year, its suicide prevention team had only spent less than 1 percent of the funds allocated to them for a paid social-media campaign. At the time, a department spokesperson pinned the blame on former VA Secretary David Shulkin, noting that “VA’s suicide prevention outreach dropped significantly, and the suicide prevention office had no permanent leader for nearly nine months until Secretary Wilkie arrived as acting secretary in April.”

Sen. Jon Tester (D-Mont.), the top Democrat on the veterans affairs committee, expressed some enthusiasm about the task force in a statement Tuesday afternoon. “This Executive Order is a step in the right direction,” he said, “but we’ve got to keep taking an all-hands-on-deck approach when it comes to efforts to expand veterans’ access to mental health care and to improve our nation’s suicide prevention efforts.”