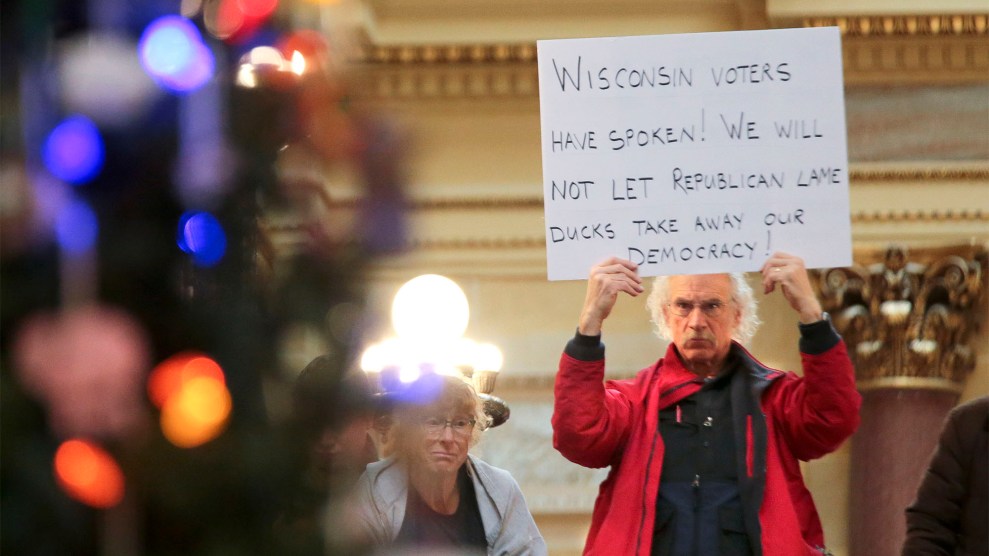 Republican state lawmakers in Wisconsin acted illegally in December by stripping power from the state’s newly elected Democratic governor before he could take office, a judge ruled Thursday.

A month after the November election, Wisconsin’s Republican-controlled legislature convened a lame-duck session to undercut incoming Democratic Gov. Tony Evers. They confirmed 82 executive appointees nominated by outgoing Gov. Scott Walker, many without holding a single hearing, and they blocked the new governor from making administrative changes to state laws and from following through on key campaign promises, such as withdrawing the state from a Republican-backed lawsuit challenging the constitutionality of the Affordable Care Act. They also limited early voting in the state, which had contributed to record turnout in 2018.

But Dane County Circuit Court judge Richard Niess ruled that the lame-duck session itself violated the law and invalidated the actions of the lame-duck legislature. Walker, Niess found, did not formally call the session, nor did the legislature pass a statute authorizing it, as required by the state constitution. “The legislature did not lawfully meet,” Niess ruled in response to a lawsuit filed by the Wisconsin League of women Voters. “There can be no justification for enforcement of the unconstitutional legislative actions emanating from the December 2018 ‘Extraordinary Session’ that is consistent with the rule of law.”

This is the second ruling against the lame-duck session. In January, a federal court found that the early voting cuts violated an existing court order preventing Republicans from cutting early voting.