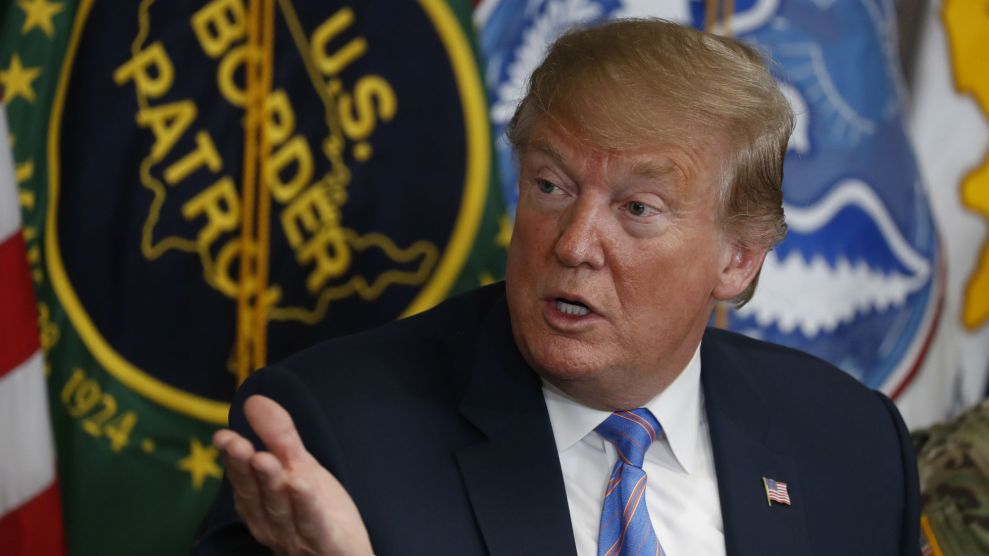 Donald Trump has hired a new set of lawyers specifically to fight Democratic attempts to wrest his tax returns out of the hands of the Internal Revenue Service—an escalation of his long-standing refusal to reveal much detail about his personal finances.

While top federal officials, including the president, are required to annually release snapshots of their personal finances—their assets and liabilities—the disclosures shed little light on how much money a president makes, and how much tax he pays. For decades, presidents and top presidential candidates have voluntarily released at least some of their recent tax returns, but that was done out of a tradition of transparency—it’s no requirement to run for office. In 2016, Trump adamantly refused to release his returns, claiming he couldn’t because they were under audit. But with the Democrats seizing control of the House of Representatives, a path opened for Congress to legally acquire Trump’s tax information.

“It will not be very hard for one of the committees to establish they have good reason to take a look.”

In 1924, following the Teapot Dome corruption scandal that rocked the Warren Harding administration, a law was created that allowed the Congressional tax committees to obtain copies of anyone’s tax returns. The scope of the law has changed over the years, but it’s still very much in place—if one of the committees asks for someone’s tax returns, the Treasury Secretary is obligated to order the IRS to turn it over. That doesn’t necessarily mean the returns will be made public, but, tax historians say, that at least in theory, there’s little the administration can do to avoid such a request.

This past week, the Democratic chairman of the House Ways and Means committee, Rep. Richard Neal, made a long-anticipated official request to the IRS asking for Trump’s tax returns. The administration has not officially responded, but Republicans and Trump himself have all complained about the request, calling it politically motivated. On Friday, William Conosvoy, an attorney recently hired personally by Trump, sent a letter to Treasury urging the agency to not comply with Democrat’s request.

“The requests for his private tax information are not consistent with governing law, do not advance any proper legislative purpose, and threaten to interfere with ordinary conduct of audits,” Conosvoy wrote. “We are confident that this misguided attempt to politicize the administration of the tax laws will not succeed.”

After the 2018 elections that gave control of Congress to the Democrats, Joseph Thorndike, a tax historian, predicted to Mother Jones that Trump would try to block the release of his tax returns to Congress by arguing that they want them for political reasons or to smear him personally. But, Thorndike told Mother Jones, it probably wouldn’t be difficult to prove that Congress has some legitimate oversight purpose for wanting to see the returns.

“Presumably, [Trump will] argue this is being done out of personal animus, and not in connection with legitimate legislative responsibility,” Thorndike said. “What it really comes down to is how high a bar that is. But based on what’s in the public record already, it seems like it will not be very hard for one of the committees to establish they have good reason to take a look.”

Thorndike pointed to last year’s New York Times investigation into the Trump family’s handling of the estate of the president’s father—which concluded that members of the Trump family may have been committed tax fraud in an effort to avoid inheritance taxes. That’s probably enough, Thorndike said.

In his request, Neal did not cite the Times investigation, but instead structured his letter as seeking more information on how the IRS audits presidents.

Thorndike and other tax legal experts say the ensuing court battle to settle the question could take years to play out—a scenario the administration seems happy with.