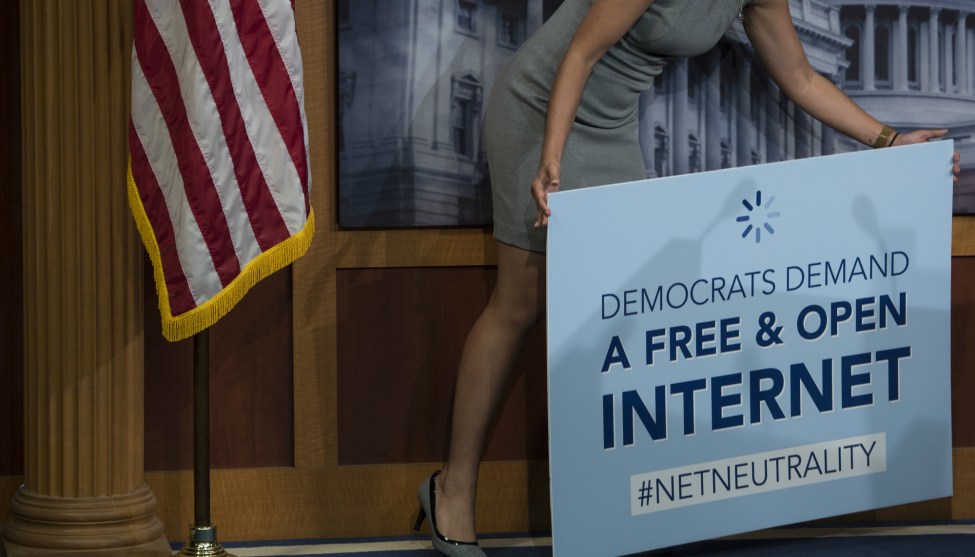 On Wednesday morning, the House of Representatives passed a bill to restore Obama-era net neutrality protections—but the effort is likely to stop there, with Senate Majority Leader Mitch McConnell (R-Ky.) saying his chamber won’t consider the measure and the White House threatening to veto the bill as well. The House passed the bill by a 232-190 margin, with one Republican supporting the measure, and all but four Democrats voting for the bill (the four Democrats chose not to vote on bill all-together).

The legislation, known as the Save the Internet Act, was unveiled by leaders of the House and Senate in early March with the goal of returning the Federal Communications Commission to its 2015 capabilities to police the three key principles of net neutrality—no blocking, no throttling, and no paid prioritization—which means internet providers would not be allowed to slow down internet content for certain consumers or offer paid “fast lanes” to certain websites.

In December 2017, the FCC, led by Trump appointed Chairman Ajit Pai, voted along party lines to overturn a 2015 FCC rule that gave the commission new authority to police net neutrality issues. Open-internet advocates had pushed for the regulation, worried that internet providers might slow down the internet for certain users and could charge websites higher rates to be accessed more quickly if they weren’t regulated.

The major telecom players like Verizon, AT&T, T-Mobile, Sprint, Comcast, and most Republicans in Congress as well as Ajit Pai are all opposed to the Title II classification that the new neutrality bill codifies. On the other hand big tech companies like Google, Facebook, Microsoft, Amazon, and a couple hundred other internet companies—such as  Twitter and Reddit—are in favor of the Title II regulations of the new bill.

Democrats have fought for the Title II powers because before the 2015 FCC ruling there were allegedly a number of instances of net neutrality violations by Comcast, AT&T, Sprint, Verizon, and other companies. “Broadband companies plan to fully implement paid prioritization schemes that favor their own online services over competing services on the internet,” says Timothy Karr, senior director of strategy and communications at Free Press, a pro-net neutrality advocacy group.

“Broadband companies plan to fully implement paid prioritization schemes that favor their own online services over competing services on the internet.”

However Republicans argue that there are very few examples of proven net neutrality violations in the past, especially violations that are indicative of a systemic or structural issue that would require new Title II regulations like those in the new net neutrality bill in the House this week. “We’ve had 20 years of the internet growing into the thing everyone knows and loves, ” says Patrick Hedger, director of policy at the FreedomWorks Foundation, a conservative advocacy group, “and we haven’t seen any significant examples of anticompetitive behavior that has been proven to occur.”

Republicans have also argued that the Title II classifications in the legislation have hurt broadband investment in general, most especially in rural areas. However, the internet providers themselves have affirmed in the past that Title II regulations haven’t hurt them. “Broadband lobbyists have tried to cherry pick data that investment in broadband reduced during the the Title II era from 2015 to 2017 and that’s not true,” says Karr, pointing to data from his organization.

The telecom industry spent $86.9 million in 2017 and over $93 million in 2018 on lobbying Congress, according to FEC data from the Center for Responsive Politics, with a significant portion of it presumably related to net neutrality. The biggest lobbying spenders were Comcast, Charter Communications, Cox and a couple of well-known telecom trade associations like the Internet & Television Association and the CTIA, which represents the US wireless communications industry.

Telecom companies and trade associations have historically contributed a little more to Republicans than Democrats but not by much. In the past two cycles some of the telecom giants like AT&T, Comcast, and Verizon have spent millions on hundreds of Democrats and Republicans in the House, with Comcast giving more to Democrats.