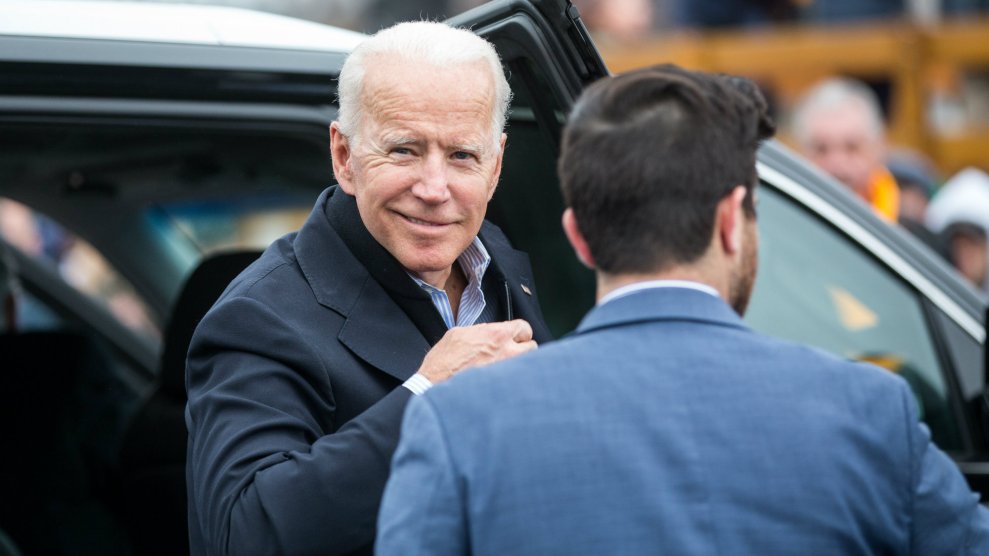 As Joe Biden joins the far-too-wide 2020 Democratic field, various media outlets have published stories noting that his 2002 vote in the Senate for a resolution that granted President George W. Bush the authority to invade Iraq could come to haunt his campaign. After all, during the 2008 Democratic primary, Barack Obama effectively cited Hillary Clinton’s vote for that measure, which led to Bush’s war and its awful aftermath, as a reason to question her judgment. And Biden was one of the 29 Democrats to support the Iraq war resolution. (The final vote was 77 to 23, with 21 Democrats saying nay.) Yet Biden’s role in that episode is more complicated than a single vote—and this one chapter in his long career of government service illuminates key aspects of Biden’s political personality.

In the summer of 2002, less than a year after the horrific 9/11 attacks, the Bush-Cheney administration initiated a PR campaign to win support for the idea of attacking the regime of Iraqi dictator Saddam Hussein. In a speech at the national conference of Veterans of Foreign Wars, Vice President Dick Cheney proclaimed, “Simply stated, there is no doubt that Saddam Hussein now has weapons of mass destruction. There is no doubt he is amassing them to use against our friends, against our allies, and against us.” Actually, that was a lie. Within the intelligence community, there was no consensus that Saddam was stockpiling WMD to strike the United States. Anthony Zinni, a former commander in chief of US Central Command and then a Middle East envoy, was sitting onstage during Cheney’s address, and, as he later said, he was stunned by the vice president’s remarks: “It was a total shock. I couldn’t believe the vice president was saying this, you know? In doing work with the CIA on Iraq WMD, through all the briefings I heard at Langley, I never saw one piece of credible evidence that there was an ongoing [WMD] program.”

But thus began the notorious White House spin crusade to convince the American public that Saddam posed a WMD threat to the United States to justify a military invasion of Iraq. As chairman of the Senate Foreign Relations Committee, Biden was in the middle of the WMD debate. As Michael Isikoff and I reported in our 2006 book, Hubris: The Inside Story of Spin, Scandal, and the Selling of the Iraq War, a few weeks after that Cheney speech, in late September, Biden was chairing a classified hearing at which CIA Director George Tenet was the key witness. Tenet told senators that there was intelligence showing that Saddam had acquired aluminum tubes used for enriching weapons-grade uranium, that he had a fleet of mobile biological weapons labs, and that he was developing drones that could transport and deliver chemical and biological agents. As Tenet testified, Biden envisioned these drones being launched off tankers cruising along the coast of the United States and attacking Philadelphia or Charleston, South Carolina. This was hair-raising stuff.

But Biden and other committee members pressed Tenet for evidence backing up these frightening claims. And a staffer passed Biden a note with a suggested question: What “technically collected” evidence of Iraqi WMD did the CIA possess? In other words, did Tenet have any concrete proof? Had the CIA tracked radioactive emissions from supposed nuclear sites, gathered electronic intercepts in which Iraqis communicated about their various WMD, or obtained samples of biological agents? “None, Senator,” Tenet answered.

A hush fell on the room. None? Nothing at all? Biden was bothered. “George, do you want me to clear the staff out of the room?” he asked. This was Biden’s way of inquiring whether the CIA chief had some super-secret intelligence nailing Saddam that he was hesitant to share with staffers present. “There’s no reason to, Senator,” Tenet responded—a signal he wasn’t holding anything back. A Biden staffer, a former Pentagon contractor who specialized in nuclear technology, went home that night and told his wife, “They’re going to war and there’s not a damn piece of evidence to substantiate it.”

At this point, the public debate concerned a congressional resolution Bush and Cheney were pushing that would provide Bush the authority to attack Iraq. Bush was essentially asking the Senate and the House to give him a go-to-war-free card, with no restraints on the option to order military action in Iraq as he saw fit. Biden, perhaps because he had seen that the case for war was flimsy, joined with two Republicans on his committee—Richard Lugar and Chuck Hagel—in a bipartisan effort to restrict Bush’s authority to invade Iraq. They proposed an alternative to Bush’s resolution that would only allow Bush to attack Iraq for the purpose of destroying WMD and only after seeking UN approval. If the UN turned Bush down, he would have to come back to Congress and prove Saddam posed a WMD threat so “grave” that only military action could eliminate it. Bush couldn’t just hop into war on his own.

The Biden-Lugar measure began attracting support from Democrats and Republicans, and it was privately supported by Secretary of State Colin Powell. No surprise, Bush was furious about the measure, and he told Republican Sen. Trent Lott that he didn’t want a measure that tied his hands. According to Lott, Bush gave him an order: “Derail the Biden legislation and make sure its language never sees the light of day.”

But before Lott could do that, Biden’s plan was undone by Rep. Dick Gephardt, the Democratic leader in the House. Gephardt had been listening to Democratic hawks in favor of a military confrontation with Saddam. And though he later claimed he was uncomfortable with Bush’s measure, he felt that he had few options. The Democrats were in the minority in the House, and the Bush measure could clearly pass within that body with both Rs and Ds on its side. From Gephardt’s perspective, it was an if-you-can’t-beat-them-join-them situation. Gephardt had run for president in 1988 and was once again contemplating a White House bid; it probably occurred to him that opposing a resolution for a war so soon after 9/11—and for a war that could end up successful and popular—might not be helpful for a future campaign.

Gephardt endorsed—and embraced—Bush’s resolution, appearing with the president at an October 2 Rose Garden event to declare his support. The move enraged many of his Democratic colleagues. Moreover, it killed Biden’s bipartisan attempt to rein in Bush and Cheney. After Gephardt bear-hugged Bush’s measure, Senate Republicans told Biden they could not sign on to his alternative. How can we be to the left of Dick Gephardt? they asked.

Biden’s attempt to impose conditions on Bush’s march to war had been killed by a fellow Democrat. And Biden was upset with Gephardt: “I was angry,” Biden said years later. “I was frustrated. But I never second-guess another man’s political judgement.”

On October 11, Bush’s resolution hit the Senate floor. There were plenty of impassioned speeches. Clinton declared, “Saddam Hussein has worked to rebuild his chemical and biological weapons stock, his missile delivery capability, and his nuclear program. He has also given aid, comfort, and sanctuary to terrorists, including Al Qaeda members.” Biden, though, contended that Iraq’s WMD “do not pose an imminent threat to our national security.” Nevertheless, Biden, who also harbored future presidential ambitions, supported the resolution. He explained his vote by saying this measure could be a “march to peace and security.” How so? If Congress handed Bush this authority, Biden argued, Powell could then push the UN Security Council to produce a resolution compelling Saddam to accept intrusive WMD inspections. That course of action, he noted, would decrease the chances of war. “Thank God for Colin Powell,” Biden exclaimed.

It didn’t turn out that way. As reluctant as Powell might have been to go to war in Iraq, four months later he made the Bush-Cheney administration’s case for war in a grand presentation to the UN that relied on a host of iffy (or just false) WMD allegations to justify military action. The following month, though WMD inspections were underway, Bush opted to proceed with the invasion.

So the story of Biden’s Iraq war vote has more facets than that of Clinton’s. He pressed the CIA for evidence to back up the White House’s fear-mongering, and when he saw the case was weak, this veteran legislator attempted to craft a bipartisan plan to slow Bush’s gallop to war and endeavored to counter the Bush-Cheney propaganda, insisting that Saddam did not pose an immediate threat. He might have succeeded had he not been sabotaged by Gephardt. Yet, when crunch time came, Biden did not say no to Bush, and he did not cast a tough vote against the go-to-war measure. Instead, Biden backed the resolution and tried to convince the public—and maybe himself—that Powell would save the day. That was a miscalculation and perhaps a sign that this Washington institutionalist put too much faith in the system, or at least in one man.

For most Democratic voters, and maybe most voters overall now, Biden ended up on the wrong side of the Iraq war vote—and on the wrong side of history. That’s the bottom line. (In 2005, Biden said he regretted his vote, remarking, “It was a mistake to assume the president would use the authority we gave him properly.”) In his own way—the way of a skilled legislator who could work with Democrats and Republicans—he did try to impede Bush’s war. It was only after he failed that Biden yielded to the forces of conventional political reality and voted in sync with the prevailing pro-war sentiment of the moment.