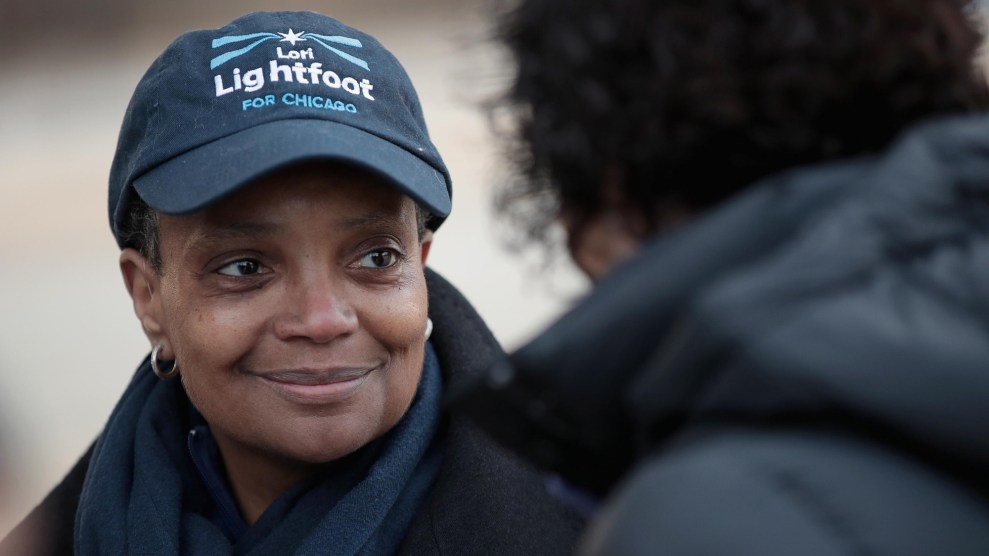 Lori Lightfoot, a former federal prosecutor whose campaign focused on reforming the city’s troubled police department, was just elected the new mayor of Chicago. She will be the first black woman in the position and the first openly gay person to lead the country’s third-largest city.

Lightfoot beat fellow Democrat Toni Preckwinkle by a landslide in Tuesday’s election. Preckwinkle, the Cook County Board president and chair of the county Democratic Party, is also a black woman who portrayed herself as a progressive check on the Chicago police. The two women advanced to this week’s runoff following a crowded election in February featuring a field of 14 candidates, including well-known figures like Bill Daley, whose father and brother both served as mayor, and newcomers like Amara Enyia, a community activist who snagged endorsements from musicians Kanye West and Chance the Rapper. The city’s mayor for the past eight years, Rahm Emanuel, announced in September he wouldn’t seek a third term.

Although during her campaign Lightfoot emphasized her police reform work as chair of the police department’s accountability task force and as president of the Chicago Police Board, many in the city’s black political establishment criticized her ties to the force and the fact that she’s never held an elected office. As my former colleague Brandon Patterson wrote back in September, laying out some of these complicated dynamics:

Emanuel has faced considerable heat from Chicago’s black community—including homegrown activist and superstar Chance the Rapper, whose recent single, “I Might Need Security,” calls on the mayor to resign over the alleged cover-up of the McDonald shooting. Emanuel’s school closures in black and brown neighborhoods haven’t helped him there either, nor has rapid gentrification. In January, Democratic gubernatorial candidate Chris Kennedy accused Emanuel of having a “strategic gentrification plan” to force black residents out and make room for wealthier white ones—Emanuel fervently denied it. “People don’t feel like government works for them,” Lightfoot told me. “They feel like elected officials and the remnants of the Democratic machine here only work for themselves.”

Lightfoot, who has never run for elected office, may have a tough time getting the votes she needs should either Preckwinkle or Susana Mendoza, both people of color with broad support, jump into the ring. The filing deadline for the February 2019 mayoral election is November 26, and several of the potential new candidates are formidable. “They’re proven fundraisers. They have records on issues that are important to special interest groups and voters,” Democratic political consultant Tom Bowen says. “They’re known for things that they’ve done in Chicago, and Lightfoot is still unproven and unknown to a vast majority of Chicago voters.”

Preckwinkle, black and well-established, could be a particular threat to Lightfoot. She “has been in politics for 25 years,” Bowen says, and has a solid base among constituencies Lightfoot needs on her side. At a press conference shortly after Emanuel’s announcement, Lightfoot cautioned voters against flocking to newbie candidates. “Many of us have been out here for months making our case to Chicagoans,” she said. “Anyone who decides to jump in to take advantage of today’s political news, I think a fair question to ask them is, ‘Where have they been?’”

Tuesday’s win is the end of a long road for the new politician. “People said things. I got denied opportunities solely on the basis of my race or my gender. Overt racism was still very much on the table,” Lightfoot told Patterson last year. “I had in me from an early age the need and a desire for fairness and for justice.”