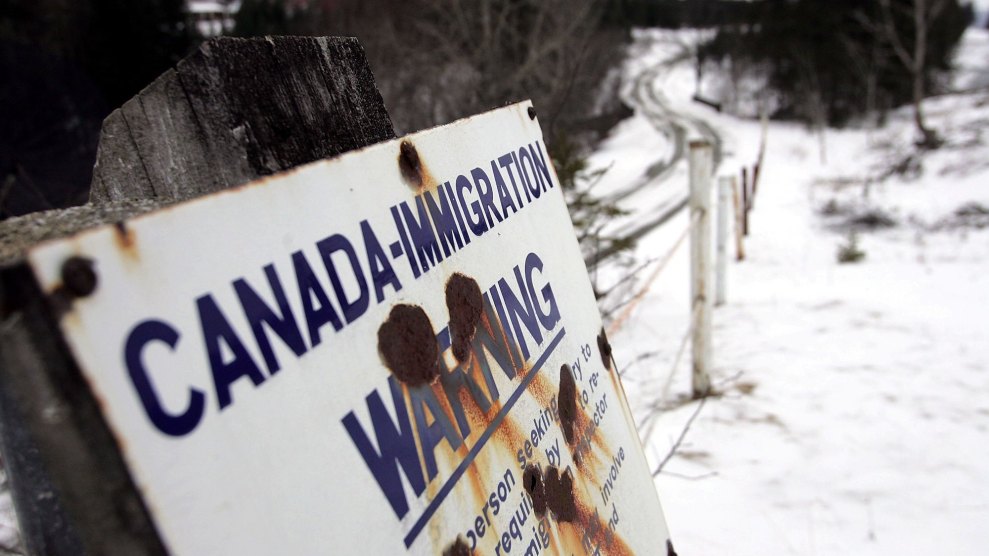 In January, with the government shutdown over President Donald Trump’s insistence on a border wall, the White House began pushing a new talking point: 17,000 criminals had been arrested at the southern border in the previous year, according to Trump, Vice President Mike Pence, and former Homeland Security Secretary Kirstjen Nielsen.

In fact, according to previously unreleased government data obtained by Mother Jones, the government was vastly exaggerating the number of criminals arriving at the southern border. That is because criminals are nearly three times as likely to be caught by Customs and Border Protection officers at the country’s northern border.

Last week, Trump threatened to close official ports of entry along the Mexican border, citing security concerns. But of the foreigners convicted of crimes in the United States or abroad who were stopped by CBP at ports of entry from October 2016 to February 2019, 43 percent arrived at the northern border, 42 percent at airports or ports, and just 15 percent at the southern border, according to a CBP spokeswoman.

A smaller number of people with criminal histories were apprehended between ports of entry by Border Patrol agents. The new data suggests that if 2018’s numbers were in line with the figures for the past two and a half years, CBP officers and Border Patrol agents actually stopped fewer than 9,000 criminals at the southern border last year, not 17,000.

This fiscal year so far, from October to March, if those same trends apply, more than 2,600 criminals have been stopped at ports of entry along the Canadian border, about 2,500 at airports and seaports, and 915 at US-Mexico border crossings. (An additional 2,513 criminals have been apprehended by Border Patrol agents along both borders.)

When Trump and other administration officials made their claim of 17,000 criminals caught at the southern border, fact-checkers noted that this figure included people stopped at airports and the northern border, but the breakdown was unknown. The administration didn’t back down from its claim.

Pence’s press secretary, Alyssa Farah, tweeted, “Fact check…it IS 100% correct that 17,000 adults with criminal records WERE arrested in FY18 at the Southern border, per” Customs and Border Protection and the Department of Homeland Security.

CBP did not provide a breakdown of the crimes of which people blocked at ports of entry were convicted. But according to data on CBP’s website, DUIs and immigration violations accounted for 60 percent of convictions among people apprehended by Border Patrol agents last year—a far cry from the violent crimes Trump has suggested immigrants have committed. Between October 2018 and March 2019, Border Patrol agents took more than 360,000 people into custody. None had been convicted of murder or manslaughter.

The number of criminals stopped by Border Patrol agents has plummeted in recent years. As Alex Nowrasteh of the libertarian Cato Institute has shown, 5.7 percent of people apprehended by Border Patrol agents had a criminal conviction in the 2015 fiscal year. That fell to just 0.5 percent in March, according to data published by CBP on Tuesday. Among the more than 92,000 people apprehended in March, there were just 189 convictions for crimes other than DUIs and immigration violations—a 1 in 500 ratio, compared to 1 in 30 in 2015.

The other main statistic pushed by the Trump administration during the shutdown was that CBP stopped nearly 4,000 known or suspected terrorists at the southern border in 2018. That figure has been similarly debunked. In January, NBC News obtained government data showing that only 41 people in a government terrorism database were stopped at the southern border in the first half of the 2018 fiscal year. And only six of those 41 were foreigners; the rest were US citizens or green card holders. At the northern border, CBP encountered 41 known or suspected terrorists without permanent legal status in the United States.

Trump threatened repeatedly that he would close some or all US-Mexico border crossings last week if Mexico didn’t meet his impossible demand of stopping all unauthorized immigration. “We’re going to have security in this country,” Trump pledged. He backed down from his threat last Thursday, saying he was giving Mexico a “one-year warning.” If Trump had actually been so concerned about security, his own government’s data suggests he should have been pushing to close the Canadian border instead.