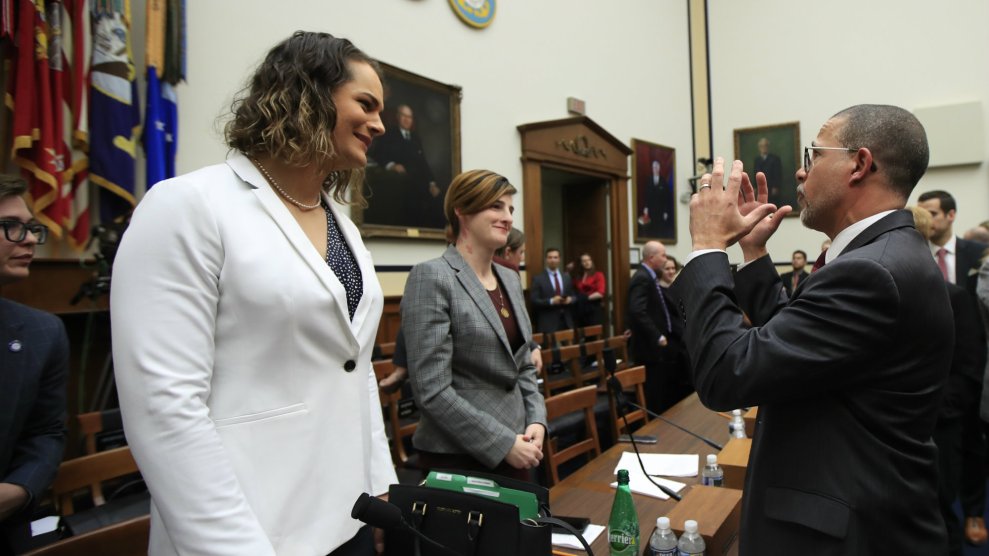 On the January day when five Supreme Court justices agreed to revive President Donald Trump’s ban on most transgender members of the military, Army Captain Alivia Stehlik was serving as the designated physical therapist for hundreds of troops in the eastern part of Afghanistan. After graduating from the United States Military Academy in 2008, Stehlik had racked up an impressive list of military prizes, including the Bronze Star Medal, which recognizes heroic action in combat from a member of the armed forces. “Since I was a kid, playing on my dad’s tanks while he was a company commander, I’ve wanted to be in the Army,” she once said.

She had studied physics at West Point and served as a platoon leader in South Korea, and she was filling a key support role for soldiers, special forces, and civilians in Afghanistan. She is also one of the roughly 14,700 members of the military who are transgender. The Pentagon had banned openly trans individuals from serving in the military for decades before Defense Secretary Ash Carter reversed the policy in June 2016. Within weeks, 10 soldiers petitioned to have their gender identities recognized.

Then Donald Trump became president, and in July 2017 he tweeted the ban back into existence. He tried to justify it by erroneously describing the “tremendous medical costs and disruption” of enlisting trans troops. That ban, slow-walked and modified by Defense Secretary James Mattis before he resigned last year, was stuck in legal limbo for months, leaving trans service members and their families unsure whether they could continue using hormones or even remain enlisted. The ban officially begins on April 12, but even more questions remain about how the military plans to interpret it and what impact the ban will have on service members who have already enlisted.

For months after Trump’s tweet, it seemed as if transgender enlistees would be spared of a policy reversal seen as unnecessary and cruel by even senior military officers. Army Chief of Staff Gen. Mark Milley, who Trump nominated this week to be his top military adviser, told Congress last year he was aware of “precisely zero” issues with transgender troops. In a blistering statement issued in 2017 shortly after the ban was announced, dozens of retired generals and other high-ranking officers predicted the proposed ban would “degrade readiness” and force transgender service members “to compromise their integrity or hide their identity.”

Under Mattis’ leadership, Pentagon officials fashioned a watered-down ban that would allow exceptions for some individuals, like Stehlik, who had already acquired a diagnosis of gender dysphoria from a military medical provider and completed her transition. She can serve openly without fear of being discharged, but other trans service members who have yet to receive a diagnosis can be kicked out. Future enlistees with any history of gender dysphoria won’t be accepted at all—during a time when the military’s largest branch is struggling to hit recruitment goals. The Trump administration’s about-face disregards the growing recent consensus among researchers, as outlined in a landmark RAND Corporation study three years ago, that trans troops pose “little or no impact on unit cohesion, operational effectiveness, or readiness.”

In March, weeks after Stehlik returned from Afghanistan—where 2,000 people “wouldn’t have gotten medical care if I hadn’t been there,” she told Mother Jones—the Pentagon unveiled a three-page directive signed by David Norquist, the acting deputy defense secretary. With all court-imposed injunctions out of the way, the Defense Department could finally act on the commander-in-chief’s direction. If Stehlik had tried to enlist after April 12 as an openly trans woman with a gender dysphoria diagnosis, she would be rejected. Many other trans troops already serving without a gender dysphoria diagnosis would also be in limbo and possibly cut loose.

“The new policy is NOT a ban on the accession of transgender persons,” reads the fact sheet that Defense Department leaders have provided to military medical providers, recruiters, and applicants who wish to join the service. But that “equivocating” explanation, as Stehlik called it, ignores the substantial burden inflicted on trans enlistees by the new policy. Service members who are given a diagnosis of gender dysphoria after April 12 won’t be able to receive hormones or undergo sex-transition surgery. They will also be forced to adhere to the standards of their birth sex—determining everything from their names on paperwork to the length of their hair—which advocates compare to the days of Don’t Ask, Don’t Tell, when queer service members could only express their true selves in private. “Make no mistake about it,” said Sharon McGowan, legal director of Lambda Legal. “This is a ban.”

“Make no mistake about it: This is a ban.”

One of the only possible options for enlistees unwilling to adhere to their birth sex is to apply for a waiver, which the service secretaries routinely grant for otherwise disqualifying activities like a history of drug use. No waiver has been granted before to a service member for being trans, and advocates are skeptical this will ever be used, especially since the services, which are responsible for granting them, have not uniformly updated their own guidance publicly to account for Trump’s transgender military policy. (The Navy and Coast Guard issued instructions of their own, and an Army spokesperson told Mother Jones their guidance would be released next week. The Marine Corps and Air Force did not confirm whether they had issued separate guidance or, if not, when it would be sent out.)

All these directives have the effect of only creating confusion. Lt. Col. Bree Fram, an astronautical engineer in the Air Force, is a board member of SPART*A, an advocacy group that supports trans service members. She will be exempt under the Trump policy, but told Mother Jones a major concern for her group is how to connect those affected by the policy to resources, especially if they are away from base. Waivers will be another flashpoint issue, but without a firm historical precedent, it’s not obvious who will approve them—a military professional or a political appointee. For service members unable to receive a diagnosis of gender dysphoria before April 12, these exemptions could be life-changing. (The Navy has said it will allow members to apply for this particular exemption.)

But many basic questions still haven’t been answered. Andy Blevins, executive director of OutServe-SLDN, a network of LGBT veterans and active-duty service members, has tried to get firm answers from the office of acting Defense Secretary Patrick Shanahan and the various branches of the military on how transgender people will fare under the new policy. He told Mother Jones he has yet to receive a response.

Three months before Trump’s ban went into effect, Technical Sgt. Jamie Hash, an Air Force manpower analyst based in San Antonio, was briefing a two-star general at the Pentagon on how she and her colleagues have been using data analytics and other innovative methods to strengthen their force. Her gender identity was never an issue. “I thought it was ironic that someone’s trying to discount the abilities of trans service members when I’m up here at a strategic level of the Air Force, as an enlisted member, having my work valued and appreciated,” she recalled.

Hash encountered no problems when she came out to her commander two years ago, shortly after trans troops were permitted to serve openly. His response, she said, was clear and direct: “This is a big deal for you, but not for the unit.” From that moment, Hash began delivering speeches and conducting trainings geared toward helping colleagues learn more about what it means to be transgender. “I hear about all the high-level announcements and read about them in the media, but as far as my personal interactions go with every link of my chain of command, there’s support,” she said. “Everyone I talk to doesn’t care if I’m transgender.”

SPART*A and other advocacy groups have escalated their outreach and support. On Monday, several transgender service members and lawyers, including Hash, Fram, and Stehlik, visited Capitol Hill to appeal directly to senators for support. Blevins told Mother Jones they had at least 46 meetings with Senate staffers, most of them just by dropping into their office. “The reception has been very warm actually,” he said. “We haven’t had a cold meeting yet.”

House Democrats denounced the transgender ban in a non-binding resolution last month, but significant obstacles remain in the Senate. Sen. James Inhofe (R-Okla.), chairman of the powerful Senate Armed Services Committee, told Defense News in November that he is “opposed to having them serving in the military.” Only three members of Congress—Anthony Brown (D-Md.), Gil Cisneros (D-CA), and Joe Kennedy (D-Mass.)—attended a rally outside the Capitol on Wednesday, which included speakers like McGowan and Shannon Minter, an attorney fighting the transgender ban in federal court.

“It’s easy to dismiss a group of people you’ve never met,” Stehlik says. It’s the reason she joined four other trans service members in February for a hearing before the House Armed Services Committee’s subcommittee on military personnel. They made history as the first-ever transgender service members to testify before Congress.

“Today, I am a more effective Soldier, officer, and therapist having gone through transition,” Stehlik told lawmakers. “It might be tempting to say that I am the exception, but that’s simply not true. Transgender service members around the world have done the same thing—add to the readiness and lethality of the United States Military.”

Mother Jones is reporting on how transgender military members are affected by the Pentagon’s new ban. Are you a trans service member applying for a waiver? How are you and your loved ones dealing with this shift in policy? Let us know how the Pentagon’s transgender military ban affects you. Fill out the form below, send us an email at talk@motherjones.com, or leave us a voicemail at (510) 519-MOJO. We may use some of your responses in a follow-up story.