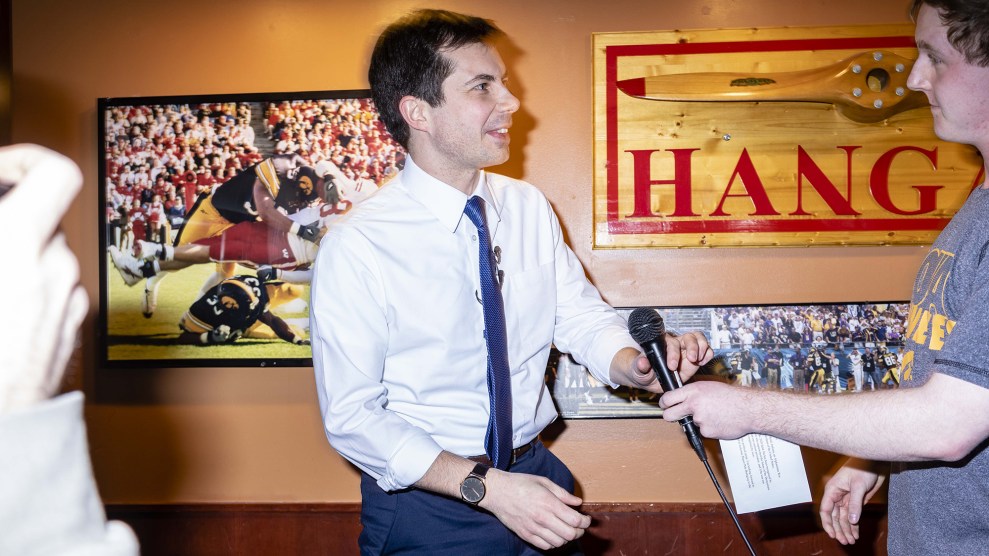 Can an openly gay war-veteran millennial become president in 2020?

This week’s guest on the Mother Jones Podcast is presidential hopeful Pete Buttigieg, the 37-year-old mayor of South Bend, Indiana, vying for a shot in a crowded Democratic field.

In front of a sold-out crowd at the Commonwealth Club in San Francisco last week, Mayor Pete, as he’s known to his constituents, had a candid conversation with Mother Jones Editor-in-Chief Clara Jeffery, in which he shared his plans to bring the rigor of running a small Rust Belt town to the White House.

But first, he needs to beat President Donald Trump—and Mayor Pete says he knows how.

Listen to the full interview:

Now hitting the campaign trail hard, Mayor Pete popped into third place in a recent poll in Iowa behind Joe Biden and Bernie Sanders. And on Twitter Monday morning, Pete announced that his team has raised more than $7 million in the first quarter of 2019—a significant amount for a candidate who, until a few months ago, wasn’t well known outside of South Bend. This also means that he meets the criteria to get onstage for the first two Democratic Party presidential debates, so we might be hearing a lot more from Mayor Pete.

Fortunately, he’s got a sense of humor. Pete offered this advice to Democratic voters: “What you want to do is, you want to nominate a really kind of forward-thinking, inclusive, new-generation, young, good-looking mayor.”

Subscribe to the Mother Jones Podcast using any of these services: