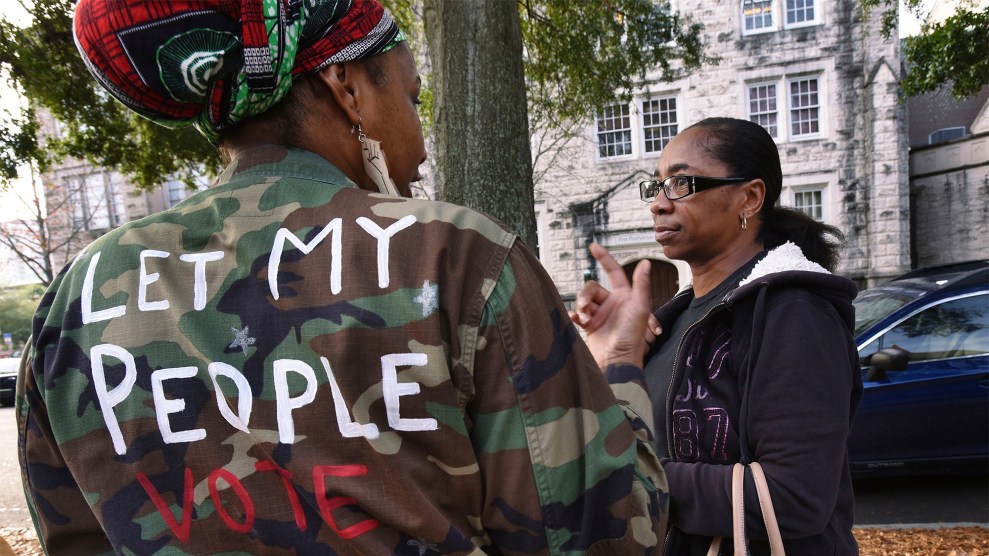 In 2010, Karen Leicht was sentenced to 28 months in prison for conspiracy to commit insurance fraud. She was released in 2013, found a job as a paralegal in Miami, and completed her probation in 2016. But the 61-year-old lifelong Republican still couldn’t vote because of a Florida law banning people with past felony convictions from voting unless their rights were restored by the governor.

Leicht should have become eligible to get her voting rights back after the 2018 election, when 64 percent of Florida voters approved a ballot initiative overturning the state’s felon disenfranchisement law. Amendment 4 promised to restore the franchise to 1.4 million Floridians, the largest expansion of voting rights in the state since the passage of the Voting Rights Act of 1965.

Yet Leicht and hundreds of thousands of other Floridians could lose the chance to regain their voting rights because of legislation that just passed Florida’s Republican-controlled legislature. The measure would require people with felony convictions to pay all restitution, fines, and fees resulting from their sentences before becoming eligible to vote. Leicht owes a staggering $59 million in restitution payments, meaning she’ll probably never vote again if Gov. Ron DeSantis, a Republican, signs the bill into law.

“$59 million—really?” Leicht asked a state senate committee in March. “You think I can ever pay that? I’ll never vote in this state again, at this rate. That’s like a poll tax.”

The bill could disenfranchise more than half a million Floridians who have not completed restitution payments. (More than 80 percent of fines levied by courts in Florida from 2014 to 2018 had “minimal collections expectations,” according to the Clerk of Courts association, because defendants were too poor to pay them off.) Those with past felony convictions who have completed probation and parole began registering to vote in January, when Amendment 4 went into effect, and voter registration numbers have more than doubled from the same period four years ago. Now that could all come to a halt. “This is clearly an effort to undermine the will of the voters,” says Micah Kubic, executive director of the ACLU of Florida. “We are creating a two-tiered system and saying how much money you have can determine whether you can vote.”

The measure passed the Florida House last week, and the Senate approved a similar bill on Thursday.

The move to gut Amendment 4 is part of a broader effort by Republican-controlled states to restrict access to the ballot after voters approved ballot initiatives in November’s midterm elections to expand voting rights and elected Democrats who supported policies like automatic voter registration and felon reenfranchisement. “There is an uptick in activity around measures to restrict voting access,” the Brennan Center for Justice states in a new report, with 19 bills restricting voting access moving through state legislatures in 10 states.

“This is clearly an effort to undermine the will of the voters,” says Micah Kubic of the ACLU of Florida. “We are creating a two-tiered system and saying how much money you have can determine whether you can vote.”

Tennessee Gov. Bill Lee signed a bill on Thursday that could curtail voter registration drives by imposing fines of up to $10,000 on groups that submit incomplete registration forms, even though they’re required by state law to hand in any registration forms they collect. The law imposes additional requirements on registration groups, such as mandatory state training and limited time windows to submit registrations, and failure to meet these requirements is punishable by jail time. Civil rights groups allege that the law is an effort to disenfranchise black voters after the Tennessee Black Voter Project registered 90,000 African Americans ahead of the 2018 election. Shortly after Lee signed the measure into law, the Tennessee chapter of the NAACP and other civil rights groups filed suit against state officials to challenge it.

The Texas state senate passed a similar bill, which would make it a felony—punishable by jail time—for a voter to provide false information on a voter registration form or cast a ballot when the person is ineligible to vote, even if it’s an honest mistake and the ballot is not counted. The Texas House of Representatives is now considering the bill.

Texas has a history of aggressive prosecutions of minority voters for alleged voter fraud. In 2018, Crystal Mason, a 43-year-old African American woman, was sentenced to five years in prison for voting while on supervised release during the 2016 election. Mason said she didn’t realize she was ineligible to vote, and her provisional ballot was not counted. The new bill, SB 9, could make such draconian prosecutions far more common. “SB 9 would sharply escalate the state’s ongoing campaign of voter suppression,” voting rights groups wrote to state lawmakers, “by spreading fear that people may be thrown in jail for honest mistakes while trying to vote.” Nearly 10,000 voters had their ballots rejected in 2018 in the state’s five largest counties for reasons like voting in the wrong precinct; now that could subject them to criminal prosecution.

Texas Democrats picked up 12 state legislative seats and nearly won a US Senate race in 2018, leading to GOP fears that the state is trending purple.

Arizona, another emerging battleground where Democrats picked up a US Senate seat and the secretary of state’s office in 2018, also passed a new law restricting voter access. Arizona holds early voting until the Friday before an election and then allows counties to open emergency voting centers for people that can’t get to the polls on Election Day. But under the new law, signed by Republican Gov. Doug Ducey, voters at the emergency centers must sign an affidavit under penalty of perjury claiming they have an unavoidable emergency. If they’re shown not to have a valid emergency, they face up to three years in jail.

There have been some expansions of voting rights this legislative session in blue states. New York passed early voting, New Mexico adopted Election Day registration, and 115 bills expanding voter access are being considered by state legislatures in 35 states. But in Republican-controlled states—particularly those where voters took steps to expand ballot access in November—the crackdown on voting rights is more prevalent.

“While there are bright spots this legislative session, there is ongoing concern that voter suppression is real and attempts to roll back access to the ballot box are happening around us,” says Myrna Perez of the Brennan Center. “This requires extreme vigilance.”