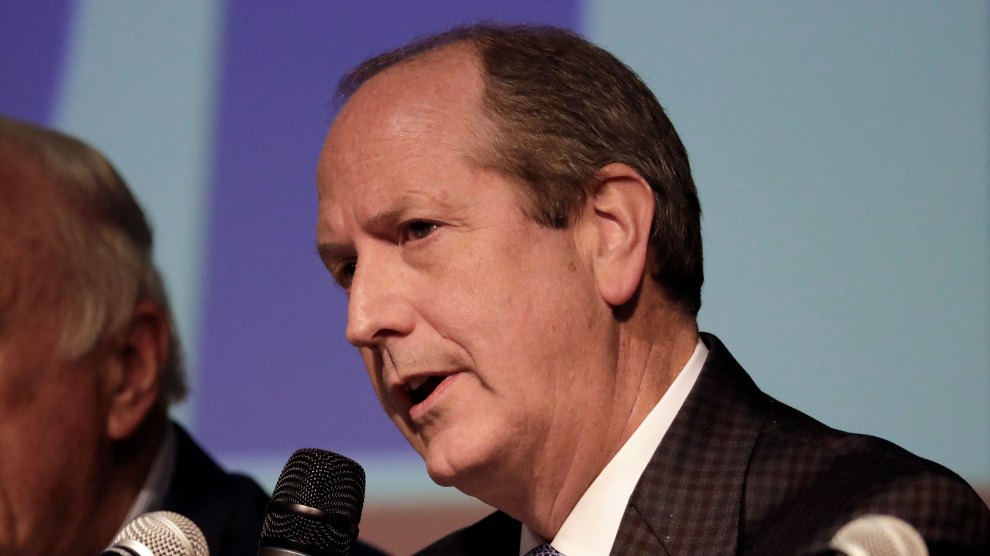 It’s official: Dan Bishop, the sponsor of North Carolina’s infamous “bathroom bill,” is the Republican nominee for the last undecided House race of the 2018 cycle; he’ll face Democrat Dan McCready in a September election in the state’s ninth district.

This election has been a months-long, scandal-laden saga. Last November, Mark Harris, the original GOP nominee in the race, appeared to eke out a victory over Democrat Dan McCready by just 905 votes, but it soon came to light that Harris allegedly paid a political consultant to illegally collect absentee ballots. The State Board of Elections voted across party lines to hold a new election.

Harris ultimately dropped out of the new race due to health concerns, endorsing Stony Rushing, a county commissioner and Confederate apologist, on the way out.

Bishop entered soon after. He released ads that attacked Democratic female politicians, called progressives “gun grabbers,” and falsely claimed he cast the deciding vote for a bill “to end infanticide.” The Club for Growth, a conservative PAC, put up more than $70,000 toward Bishop’s campaign, and Ted Cruz tweeted an endorsement.

“The same establishment insiders that fought against President Trump want to keep me out of Washington, too!” said Rushing in an ad, wading through the brackish waters of the 9th district. “But when you grow up in the country, you learn to deal with things that come out of the swamp.”

It wasn’t a winning strategy.

The election has cast a light on North Carolina’s electoral infrastructure. The state is famous for its gerrymandering. Every electoral map since 2010 has “basically been declared illegal, in one sense or another,” according to Tom Wolf, a lawyer for the Democracy Program with the Brennan Center for Justice. A recent bribery scandal within the state’s Republican party has only elevated concern, and a battle over voter ID laws looms for the 2020 election.

McCready appears to be building a campaign around North Carolina’s failure to preserve its democratic values in a new ad. “This is bigger than just a seat in Congress,” he says in the video released yesterday. “This is about: What does it mean to live in a democracy?”

We are still fighting. Check out our first video of the special election. #NC09 pic.twitter.com/awnShJaO46