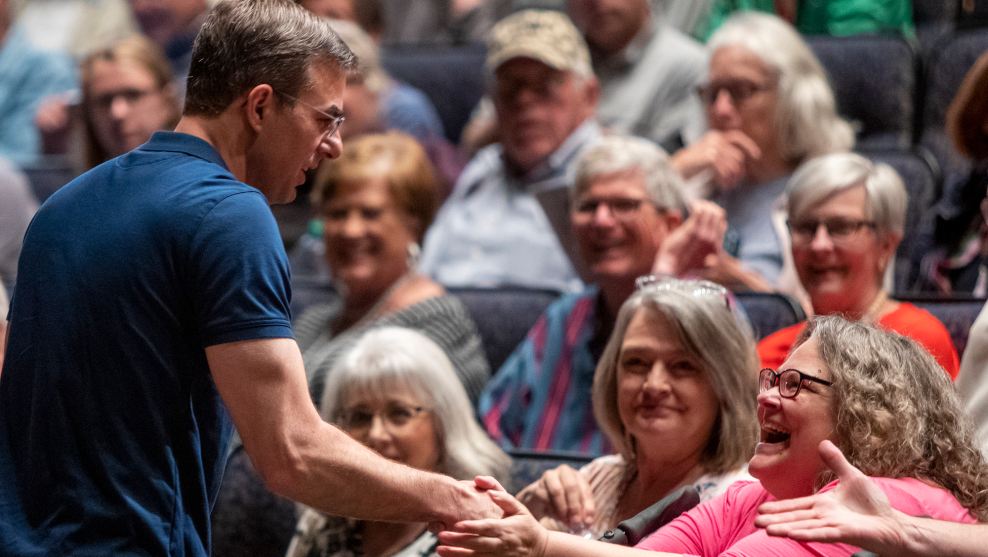 Rep. Justin Amash returned home to Grand Rapids, Michigan, on Tuesday for his first public event since becoming the first—and so far only—Republican in Congress to back impeachment proceedings against President Donald Trump. That may be a lonely position on Capitol Hill, but it inspired multiple standing ovations and rounds of applause from voters attending the town hall.

“I want to salute your courage,” one man told Amash, sparking cheers from the audience.

As he has previously done on Twitter, Amash spent much of the event outlining his belief that Trump had committed impeachable offenses, as well as why he considered it Congress’ duty to hold the president accountable for such actions. Amash repeatedly referred to the allegations outlined in the Mueller report to explain how he had arrived at that conclusion.

But not everyone at Tuesday’s packed event appeared pleased. After one woman wearing a “Make America Great Again” hat accused him of drinking the same “Kool-aid” as Democrats, Amash—who is a founding member of the ultra-conservative House Freedom Caucus—was forced to defend both his position on impeachment and conservative voting record.

“I’m not even a middle-of-the-road Republican when it comes to these scorecards,” he responded. “So, I haven’t changed. I’m who I said I was: I’m a principled, constitutional conservative who has stayed consistent regardless of whether we have President Obama in office or President Trump.”

This video gets to the heart of the Amash town hall: pic.twitter.com/PThqciSI8E

Amash also told voters that many of his Republican colleagues privately agreed with him but were unwilling to say so publicly. “What they’ll say to me is, ‘Justin, you know, going out publicly with that, you know the Democrats will never support you. You know that they’re hypocrites on this stuff,'” Amash said. “And I say, ‘You know some of them are, some of them aren’t. But it doesn’t matter to me.’ Because you have to look at what you’re doing first.”

“If you have a society where all we care about is that the other side is bad, and therefore we don’t have to do the right thing, that society will break down and you will have no liberty,” he continued, again drawing applause.

Pretty rare moment in politics. @justinamash says some of his colleagues agree with him about President Trump and the Mueller report but won't speak out publicly. pic.twitter.com/3APeeiI3US