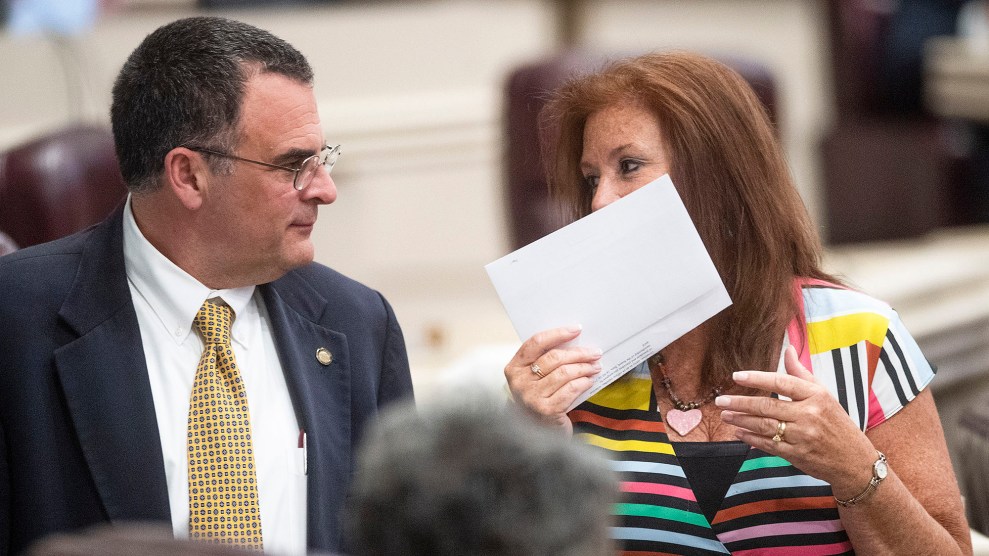 The Alabama State Senate passed a bill on Tuesday that would effectively ban abortion in the state, bringing the nation’s most restrictive abortion legislation one step closer to becoming law. Republican Gov. Kay Ivey has not said if she will sign or veto the bill.

The bill would make it a Class A felony for a physician to perform an abortion, and a Class C felony to attempt to perform one, meaning that a doctor could face up to 99 year in prison for performing an abortion and up to 10 years in prison for attempting one. The text of the bill compares aborted fetuses to Jewish victims of the Holocaust, as well as to victims of several other historical mass murders.

The bill could send physicians to prison for performing abortions, but it would protect women who receive them from being held criminally culpable. On Tuesday, the state Senate voted against an amendment that would have allowed for exceptions in cases of rape and incest.

The bill is meant to challenge Roe v. Wade, the landmark 1974 Supreme Court ruling that affirmed a woman’s right to choose whether to have an abortion. When Sen. Rodger Smitherman (D) asked Sen. Clyde Chambliss (R) what the purpose of the bill was during Tuesday’s state Senate debate, Chambliss replied, “So that we can go directly to the Supreme Court to challenge Roe v. Wade.”

Alabama Democrats argued that the bill would lead women to pursue unsafe abortions, cause unnecessary strife to victims of rape and incest, and cost the state money by setting it up for a legal battle. When Smitherman brought up the risk of women dying from self-imposed abortions, Chambliss said, “I would hope no female would do that in the future.”

Supreme Court Justice Stephen Breyer hinted at the possibility of a reevaluation of Roe in his dissent for a case decided Monday, Franchise Tax Board of California v. Hyatt. “The majority has surrendered to the temptation to overrule Hall even though it is a well-reasoned decision that has caused no serious practical problems in the four decades since we decided it,” Breyer wrote, referring to the five conservative judges’ decision to overturn precedent in Monday’s ruling. Breyer cited Planned Parenthood of Southeastern Pennsylvania v. Casey, a 1992 Supreme Court decision that upheld Roe, as an example of another precedent now at risk, adding, “Today’s decision can only cause one to wonder which cases the Court will overrule next.”

Other states, such as Ohio and Georgia, have recently passed laws banning abortion after a fetal heartbeat is detected—usually at around six weeks’ gestation—but Alabama’s bill goes a step further by outlawing abortion entirely.

Reproductive rights activists have voiced their opposition to the bill, saying it would harm women. “These bans are blatantly unconstitutional and lawmakers know it—they just don’t care,” Staci Fox, CEO and president of Planned Parenthood Southeast, said in a statement. “Alabamians are just pawns in this political game to challenge access to safe, legal abortion nationally.”