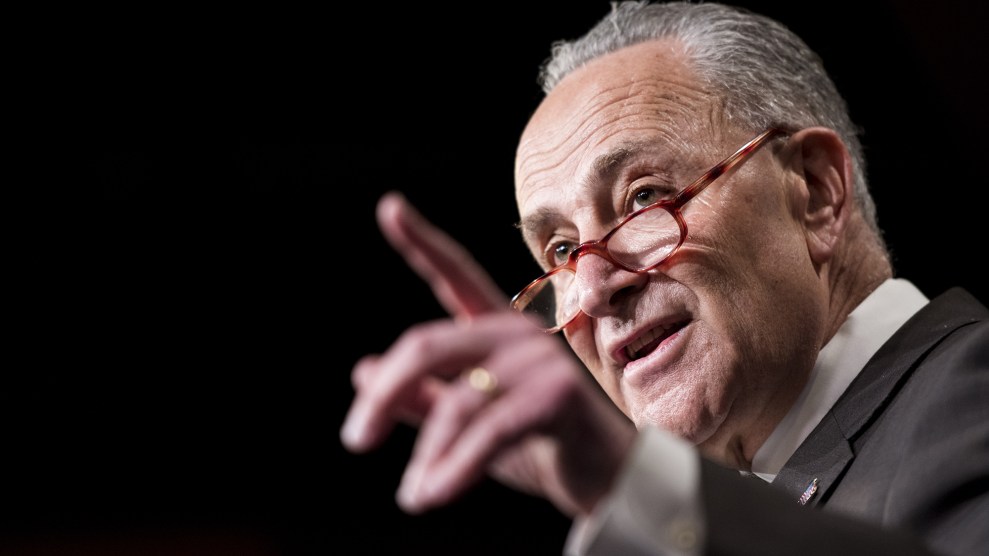 Senate Minority Leader Chuck Schumer speaks during the press conference in the Capitol on the formation of the Senate Democrats' Special Committee On Climate Change on March 27, 2019. Bill Clark/Congressional Quarterly/Newscom via ZUMA

Senate Minority Leader Chuck Schumer (D-N.Y.) accused Majority Leader Mitch McConnell of “aiding and abetting” Russian interference in US elections by failing to address election security concerns, despite warnings from the intelligence community that Russia may once again attempt to interfere in the 2020 campaign.

“The Russians want us to lose faith in democracy and feel that elections aren’t on the level, no matter what party’s in charge,” Schumer told reporters Tuesday afternoon. “Mitch McConnell is aiding and abetting it by refusing to do anything.”

“The Russians want us to lose faith in democracy.”

“It may be that Trump wants the Russians to participate and he’s telling McConnell to do nothing,” Schumer added. He also suggested McConnell could be trying to cover up for his own failures, noting reports that in advance of the 2016 vote, McConnell refused to sign onto a bipartisan statement from congressional leaders pointing the finger at Russia, prompting the Obama administration to water its own warnings. “Russian interference, or any foreign government interference in our election erodes at the root of our democracy and could actually topple the mighty oak that has been our republic for 200 years. And they are doing absolutely nothing,” Schumer said.

Schumer’s comments come after McConnell gave a speech on the Senate floor Tuesday morning declaring “case closed” on investigations into the Trump campaign’s interactions with Russia now that special counsel Robert Mueller’s report is complete. McConnell also praised the Trump administration, claiming they had tackled election security and made “Russia pay” for its 2016 interference, while criticizing the Obama administration for not having taken the threat seriously. His assertions stood in stark contrast to recent reporting that President  Donald Trump himself does not like to discuss Russian interference, a reticence that is likely hindering the government’s ability to fight such meddling in 2020. Last year, Mother Jones reported that Democrats on Capitol Hill were frustrated that their Republican colleagues were not moving forward with election security legislation, presumably because Trump saw it as a criticism of his legitimacy.

In a his own speech on the Senate floor after McConnell’s, Schumer challenged his counterpart to do more on election security, starting by facilitating related briefings for senators.

“Even as minimal a request as I made to the leader—an all-Senators, classified briefing from our defense and intelligence leaders so that the Senate understands what we need to do to protect America in 2020 and beyond,” he said, “I’ve been asking for two weeks. We still haven’t gotten action.”