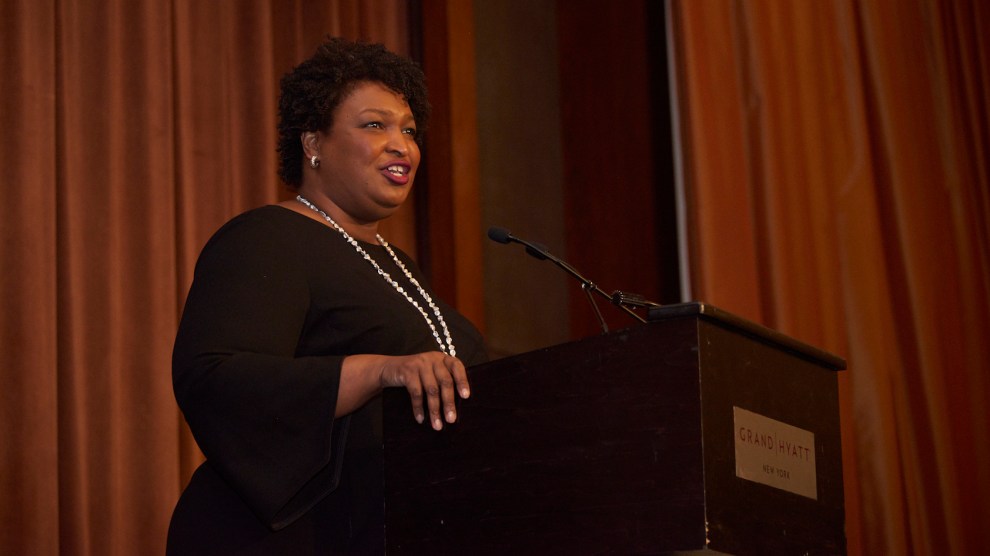 One week after making the somewhat unusual teased-in-advance public announcement that she will not be running to represent Georgia in the United States Senate in 2020, Stacey Abrams was in New York City to talk about criminal justice reform. While there’s still speculation that Abrams will jump into the increasingly crowded presidential race, her speech was a far cry from what other White House hopefuls have laid out over the past few months. For one, her remarks were deeply personal, so much so that Abrams broke down in tears at several points, touching on her own family’s experiences with incarceration, what she thinks is still broken in her home state, and why the governor’s job is so damn important.

Abrams was there Wednesday morning as this year’s recipient of the Spirit Medal from the Osborne Association, an advocacy group that provides direct services to people in prison and their families. It’s support that Abrams said she wished existed in Mississippi, where her younger brother Walter has cycled in and out of prison after battling for decades with mental illness and substance addiction. “When I ran for governor of Georgia, it was not for a title, it was for a job,” Abrams told the audience of about 600 packed into the Grand Hyatt ballroom. “It was for a job that would allow me to be the imprimatur of the state to say that I see Walter and all the Walters in the South.”

As a reporter who has covered Abrams‘ moves—and rumors about those moves—closely over the past year, the words felt like the clearest indication yet that she still sees herself as Georgia’s next chief executive and that she’ll in fact challenge now-Governor Brian Kemp again in 2022.

Consider what she said in her April 30 video statement making clear she wouldn’t run for Senate: “I am so grateful for all the support and encouragement I’ve received from fellow Georgians to leaders of Congress and beyond,” Abrams said. “However, the fights to be waged require a deep commitment to the job and I do not see the U.S. Senate as the best role for me in this battle for our nation’s future.”

I am grateful for all the encouragement I received to run for U.S. Senate, and I’m committed to doing everything I can to help elect a Democrat to that seat next year. #gapol pic.twitter.com/5o14BqgqwO

Of course this could signal an opening for another, higher executive office.  But in the ballroom Wednesday, Abrams used the opportunity to talk about the outsized impact that state governments, not federal lawmakers, have specifically on criminal justice reform. “I live in a state,” she said “that [has] the meanest incarceration policy in the country, and despite being the eighth largest state in the nation, by 2014 we had the fourth highest incarceration rate in the nation.”

Abrams grew up working poor in Mississippi, but all six siblings were high achievers, including Walter, who enrolled at Morehouse College. For years, she said, he struggled with undiagnosed bipolar disorder and used drugs and alcohol to cope. Eventually, he landed in prison, where he finally received his diagnosis and got access to medication. But when he was released, Walter lost his access to that medication, couldn’t afford it on his own or even with his family’s help, and wound up being sent back to serve more time due to a parole violation.

“There are few things that bring tears to my eyes and emotion to my voice but clarity to my thinking and it is the commitment to justice in our criminal system,” she said.

While Walter’s story was a consistent theme in Abrams’ historic 2018 run for governor—she often told it explain why she supported an expansion of Medicaid in states throughout the South, which Republicans have routinely railed against—her tone was markedly different Wednesday than it was on the campaign trail. Instead of her typical posture of resolute Obamaesque thumb wagging and and heartfelt smiles, the feeling was just much more raw. “It’s not just the medication,” Abrams said about her brother’s struggles to stay out of prison. “It’s the support  that says when you get fired from your job when they finally do a background check and they tell you ‘I’m sorry we can’t retain you,’ it’s someone other than your family to say, ‘We love you and we will help you.’ But that doesn’t exist where we live.”

Abrams then broke down in tears. “We’re family, and family isn’t enough,” she said. “We need organizations, we need government that sees the humanity and potential in every person.”

Government can, and has the responsibility, to do better. “I am ashamed that together we have decided not to act with the speed and the intensity and the compassion that I know we’re capable of,” she said.

The speech also comes as Abrams is making moves to keep a toe hold in state politics. Just this week, Kemp signed a law that bans abortions in the state after six weeks, before many women even know they’re pregnant. A group of black women lawmakers, including Reps. Park Cannon and Renitta Shannon, spoke powerfully over the past few months about their own abortions while rallying against the bill. Abrams, who spent a decade as the Georgia House minority leader, also spoke out against the legislation: “Bad policies like the forced pregnancy bill are a direct result of voter suppression,” she wrote on Twitter.

Bad policies like the forced pregnancy bill are a direct result of voter suppression. If leaders can silence Georgians’ voices at the ballot box, they can ignore Georgians’ voices when in office. We will fight back in court and at the voting booth. #HB481 https://t.co/15iOJWaBUU

Notably, she ended her tweet with a message that, in retrospect, seems like a potential signal: “We will fight back in court and at the voting booth.”

I’m thinking that maybe, just maybe, she’ll once again be on the ticket.

Correction: The piece has been updated to reflect the next race for governor in Georgia is 2022.