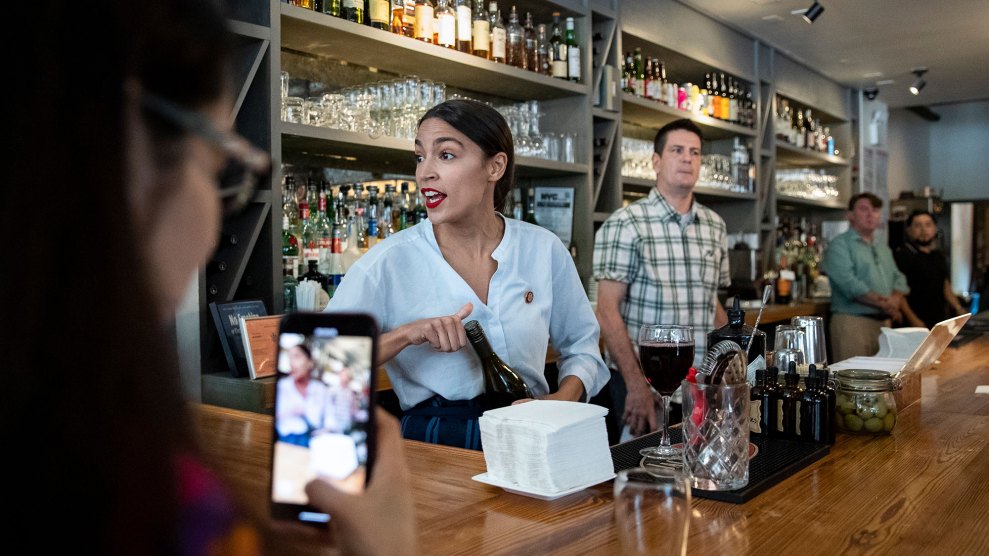 When was the last time your bartender talked to you about the need for a fair wage or about the exploitation of tipped workers? Well, if you were at the Queensboro Restaurant in Jackson Heights last night, you sure would have gotten an earful from the 29-year-old behind the bar.

Wearing a blue and gray apron, Rep. Alexandria Ocasio-Cortez (D-NY) mixed drinks and served tables for an hour last night to show support for the Raise The Wage Act, which would gradually boost the federal minimum wage for tipped workers.

“The federal tipped minimum wage is $2.13 an hour—that is unacceptable!” Ocasio-Cortez, a former bartender, said. From behind the bar, she told patrons and supporters that any job that pays that rate is “indentured servitude.”

I was nervous that I may have lost my touch – still got it! That muscle memory doesn’t quit 😉

Now let’s pass #RaiseTheWage and get $15 an hour minimum for every worker in America. pic.twitter.com/FR0ARUB7bd

Ocasio-Cortez delivered pizzas to hungry customers and showed her skills with a shaker behind the bar, chatting about the need to raise the minimum wage for tipped workers to $15 an hour. The restaurant was packed with people taking selfies and posting videos of the congressional freshman and internet celebrity.

And she wasn’t the only politician hanging out at a bar on a Friday evening. Former President Barack Obama met with Canadian Prime Minister Justin Trudeau at a brewery in Ottawa, Canada. Let’s hope that they left a nice tip for their bartenders—who already get a minimum wage of about $10 an hour.