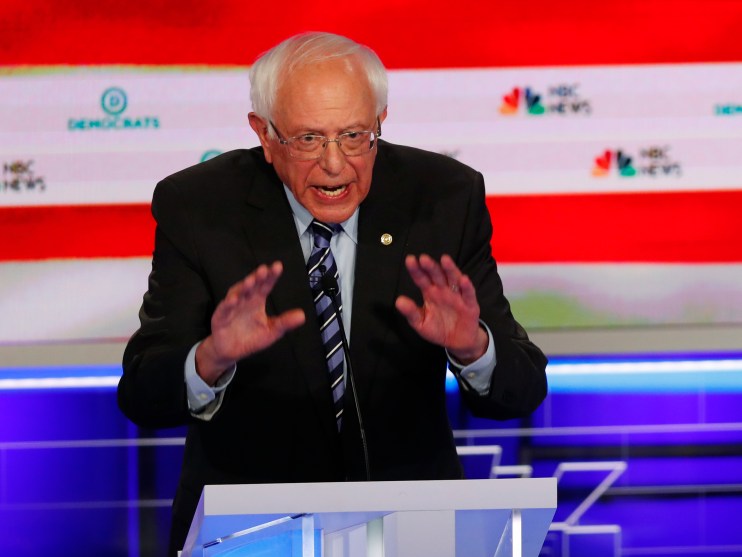 Last night, Sen. Bernie Sanders (I-Vt.) was asked on the Democratic presidential debate stage how he would protect abortion rights in the face of unprecedented attacks on the procedure and the possibility that Roe v. Wade might be overturned. Sanders gave a surprising response: He’d fight back against restrictions on abortion with his signature legislation, Medicare for All.

So how would this bill, which would shift health care coverage from private insurers to a new government program, protect women’s right to an abortion?

Essentially, there are two mechanisms. First, Sanders’ Medicare for All bill promises free “comprehensive reproductive, maternity, and newborn care.” Although the bill does not explicitly state this, Sanders’ team confirmed that this provision would cover abortions.

The bill would also repeal the Hyde Amendment, a measure attached to yearly spending bills that currently bans federal funding for abortion coverage. While some states allow their own Medicaid dollars to go toward abortions, 35 states and the District of Columbia do not allow any Medicaid funding to cover abortions. In other words, in most of the country Medicaid recipients and other people on federal health insurance programs are forced to pay out of pocket for abortions, which can range from $75 to $3,000.

Sanders’ bill states: “Restrictions Shall not apply. —Any other provision of law in effect on the date of enactment of this Act restricting the use of Federal funds for any reproductive health service shall not apply to monies in the Trust Fund.”

Universal coverage for abortion would go a long way toward expanding access to abortion for lower-income Americans. Nine states, seemingly emboldened by the confirmation of conservative justice Brett Kavanaugh to the Supreme Court, have passed heightened restrictions on abortions this year. Sanders’ Medicare for All plan does not specifically prevent states from passing legislation like the six-week ban on abortions in Georgia.  However, Sanders has co-sponsored other legislation, such as the Women’s Health Protection Act, which would ban states from enacting certain restrictions on abortion, including bans on abortions prior to “fetal viability.”