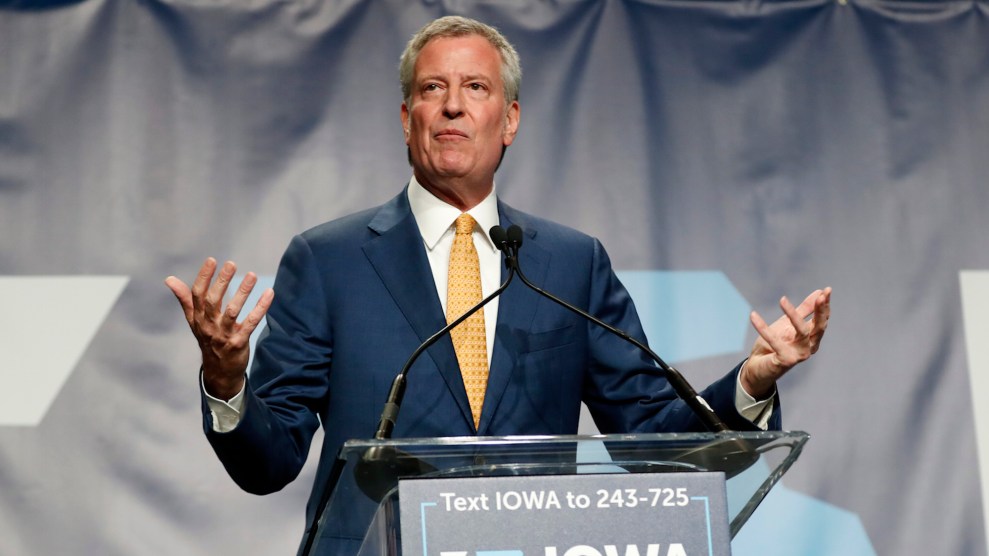 It’s been rough goings for New York City Mayor Bill de Blasio since he declared his presidential intentions. More than three-quarters of his current constituents wish he hadn’t run—and even tried to ban him from his gym for doing so. The rest of the country hasn’t felt inspired, either: Since he entered the race in May, he’s consistently polled in the gutter. And according to a new analysis from the Washington Post, he’s the candidate voters would most like to see drop out.

But on Friday, when New York magazine published journalist E. Jean Carroll’s horrifying account of being raped by President Donald Trump in New York City’s Bergdorf Goodman department store in the mid-1990s, de Blasio suddenly found himself in the role of could-be hero. As mayor of the city in which said department store exists—in a state where no statute of limitations on prosecuting rape accusations exists—de Blasio, surely, could put some real mettle behind his campaign’s raison d’être: “Donald Trump must be stopped.”

And during a weekend of presidential forum round robins in Columbia, South Carolina, de Blasio announced his intentions to do just that. “This is the most serious of all the charges,” de Blasio told reporters. “The moment we, in New York City with our police department have a complaint, we will investigate immediately, and we will find out the truth.”

Mayor de Blasio says the @NYPDnews will investigate the allegation that @realDonaldTrump raped writer E. Jean Carroll as soon as the NYPD receives a complaint. “We will find out the truth,” de Blasio says. pic.twitter.com/elCYsZk69e

Not so fast. Mother Jones‘ Madison Pauly spoke with Roger Canaff, a former sex crimes prosecutor in the Bronx who now trains law enforcement on how to handle sexual violence cases, just as Carroll’s allegations came to light. And she learned that prosecuting the president for this heinous act might be impossible.

And Canaff told Pauly that federal case law has enforced that precedent: