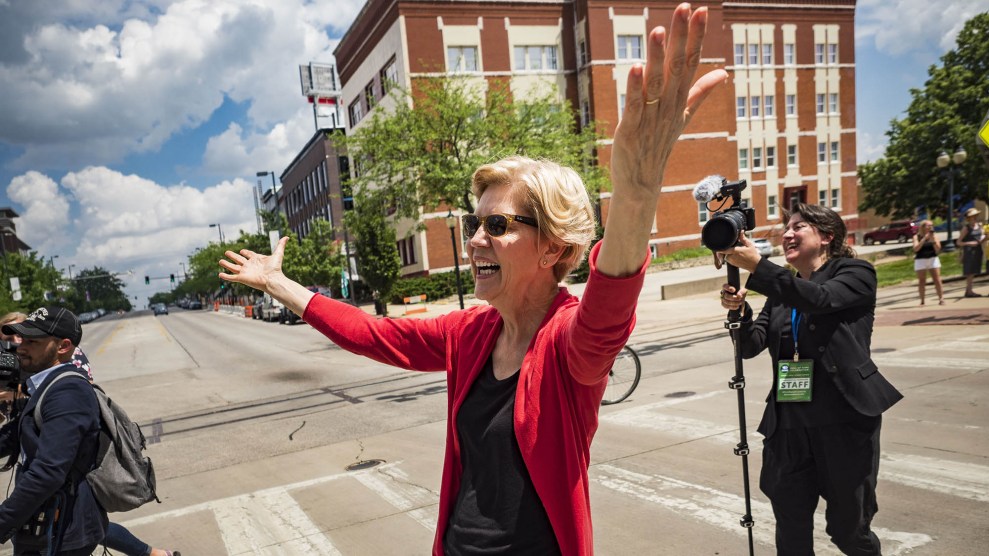 Elizabeth Warren rolled out an aggressive, $20 billion election security proposal Tuesday. The plan, in keeping with previous such proposals issued by her 2020 presidential campaign, both envisions an expanded role for the federal government while offering a level of detail that has helped the Massachusetts senator set herself apart from a large field of rivals. Warren’s proposal would impose minimum nationwide security standards, mandate post-election audits, boost Washington’s spending on aging election infrastructure, and create a new beefed-up agency to coordinate election security and procedures.

“Our elections should be as secure as Fort Knox,” Warren wrote. “But instead, they’re less secure than your Amazon account.”

“Our elections should be as secure as Fort Knox… instead, they’re less secure than your Amazon account.”

If adopted, the proposals would mark a sharp break from the US’s current approach to election administration, which is mostly carried out at the state and local levels, with county and, in some cases, town, officials responsible for everything from voting machine procurement to selecting polling stations.

“The federal government will replace insecure and outdated systems with hand-marked, voter-verified paper ballot machines,” Warren wrote. If states chose to adopt the same standards for local elections, under her plan the federal government would fully fund those contests, and even offer bonuses for achieving high voter turnout.

Candice Hoke, an election administration and constitutional law expert and professor at the Cleveland-Marshall College of Law, said Warren is right to push for federal mandates on election security, and would have ample constitutional authority to oversee and regulate federal elections. “Election security is an area that should not be left to the states any more than equipping our Air Force,” Hoke said.

But Hoke disagreed with Warren’s call to have a federal agency take on basic election logistics, like local jurisdictions’ ballot design, saying the work is far too complicated to be managed centrally. “These are major logistical and staffing issues, so I don’t think it can be federalized,” she warned.

State and local officials howled in protest when former Department of Homeland Security Jeh Johnson designated election infrastructure as critical infrastructure in January 2017, just weeks before President Obama left office. This month, Senate Majority Leader Mitch McConnell (R-Ky.) told Fox News’ Laura Ingraham that his well-documented opposition to election security legislation, offered by both Republicans and Democrats, has to do with fears that Democrats “want to nationalize everything… because they think that would somehow benefit them.”

As recently as Monday, during an election security background call organized by the White House, a senior administration official praised several federal agencies involved in elections, while emphasizing states’ primary role. “We continue to be responsive to the needs of election administrators and really provide them with solid guidance, but not any further than we would need to respecting our system of federalism,” the official said.

Warren’s plan would replace the beleaguered Election Assistance Commission (EAC) with a new Secure Democracy Administration, an independent agency that would have the power to compel election security, ballot design, and vote handling standards. The EAC, created in the wake of the Florida recount that determined the 2000 presidential election, currently sets  voluntary, recommended standards for voting technology and collects data about elections, but has no enforcement authority. It has been under almost constant attack from Republicans since its inception, with the party repeatedly pushing to abolish the agency.

Alex Halderman, a computer science professor at the University of Michigan and one of the country’s foremost election security experts, told Mother Jones that he’d been consulted by Warren’s staff ahead of its release. After reading the full proposal, though, he said he was “impressed,” and endorsed Warren’s call for federal security standards, while expressing some reservations about decreasing the states’ responsibility.

“Most experts will tell you right away that what we need to secure our elections isn’t rocket science. It’s relatively simple and relatively low-tech changes,” Halderman said. “The main obstacle to election security today is that some states are just either moving very slowly or haven’t committed the resources to implement things like paper and robust audits.”

“In terms of overall vision, it’s refreshing to see this level of ambition,” he said. “We shouldn’t settle for second-class elections in this country. We have the resources, we have the know-how, we have the technology to solve election security and declare this no longer a problem that voters have to worry about. But it’s going to take coordination and strong leadership from the federal government to make that happen.”