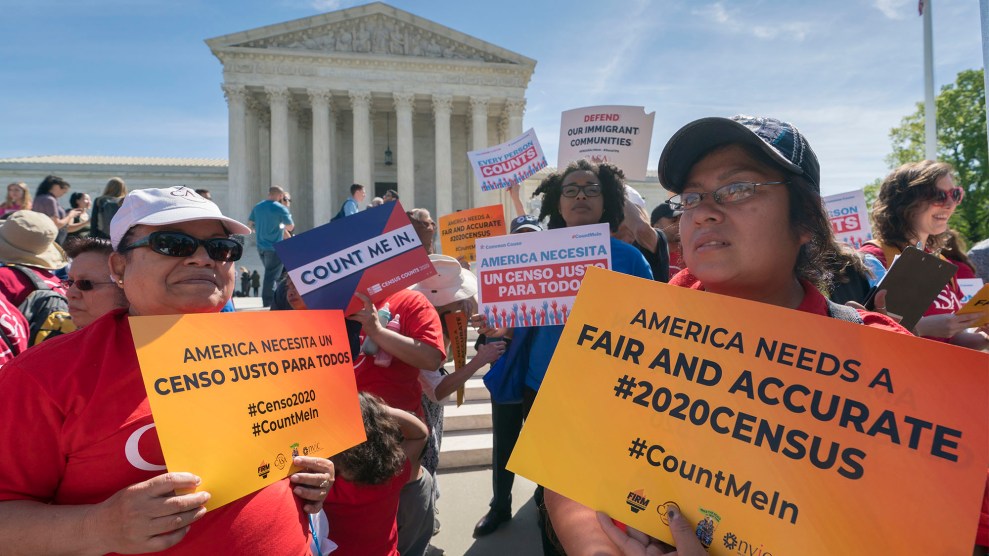 Immigration activists rally outside the Supreme Court on April 23 as the justices hear arguments over the Trump administration's plan to ask about citizenship on the 2020 census.J. Scott Applewhite/AP

Update 6/25/19: On Tuesday afternoon, the Fourth Circuit Court of Appeals remanded the case back to the district court to allow the judge to examine the new evidence and the plaintiffs’ equal protection claim. Moreover, the Fourth Circuit judge, James Wynn Jr., recommended that the district court consider imposing an injunction to block the citizenship question from being placed on the 2020 census while the case continues to be considered.

A federal judge in Maryland found on Monday that the Trump administration’s addition of a citizenship question to the 2020 census might have been motivated by a desire to reduce the political clout of Hispanics and said he would reopen the case, if given the opportunity, to rule on late-breaking smoking-gun evidence. With the Supreme Court set to rule on the citizenship question by the end of the week, this sets up another longshot scenario where the question could be invalidated.

In late May, news broke that Thomas Hofeller, the GOP’s longtime gerrymandering mastermind, had pushed for a citizenship question in order to draw new political districts that he said would be “advantageous to Republicans and Non-Hispanic Whites.” Hofeller ghostwrote a key section of a Justice Department letter requesting the question, which was approved by Commerce Secretary Wilbur Ross, and told the administration to argue that it was needed to better enforce the Voting Rights Act, when Hofeller had already concluded it would hurt Hispanic voters.

Challenges to the citizenship question have made their way through several courts; the case that’s currently before the Supreme Court came from New York state. In April, Hazel became the third federal judge to strike down the citizenship question, but he declined to rule that the addition of the question was motivated by a discriminatory animus against Hispanics. But Hazel said that if given the chance, he would reopen the case to examine the new evidence and find whether the citizenship question violated the equal protection rights of Hispanic voters. “As more puzzle pieces are placed on the mat, a disturbing picture of the decisionmakers’ motives takes shape,” he wrote on Monday. (A federal court in New York is currently examining similar evidence and has asked for briefings from both sides.)

However, with the Supreme Court expected to rule on the census case this week, Hazel noted that his new order could soon be rendered moot: If the Supreme Court makes a definitive ruling on the citizenship question, it’ll effectively put an end to the ongoing deliberations in Maryland and New York over the matter. For Hazel’s reconsideration of the discriminatory evidence to have any effect, an unlikely series of events would need to take place. First, the Supreme Court would have to punt on the question in some form, either by sending it back to the lower courts or by issuing a narrow ruling that doesn’t touch on the equal-protection questions Hazel hopes to address. Then, the Fourth Circuit Court of Appeals, which is currently considering an appeal of Hazel’s ruling and has scheduled oral arguments for July 2, would need to remand the case to Hazel.

Between the Supreme Court’s imminent ruling and the Census Bureau’s deadline for printing the 2020 census forms, it’s a longshot that this new evidence will be heard in court.

Another piece of evidence released on Sunday further undercut the Trump administration’s position. Research by the Census Bureau found that the citizenship question could reduce response rates among households with at least one noncitizen by up to 8 percent, an increase from its initial projection of a 5.8 percent decrease in responses. That means the 2020 census could undercount almost nine million people, tweeted ACLU attorney Dale Ho, “more people than in New Jersey, our 11th largest state.”

An 8% reduction in census responses among households w/ a noncitizen translates to almost 9 million people. That’s more people than in New Jersey, our 11th largest state. If they were a state they’d have 12 seats in Congress & 14 votes in the Electoral College. https://t.co/wL4Sm0UCsl