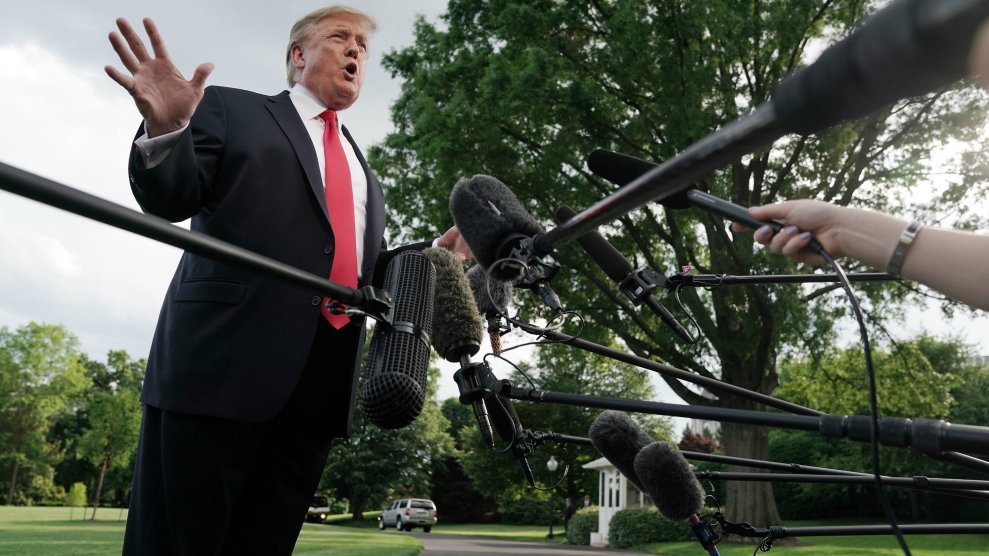 Update: On January 2, Iranian Gen. Qassem Soleimani was killed in Iraq by a US drone strike, increasing the risk of further military conflict between the United States and Iran. While tensions have risen dramatically since this story was first published in June 2019, the below scenario of what shape a war with Iran would take remains worrisomely plausible.

The simmering conflict between the United States and Iran could become a war in much the same way Ernest Hemingway once described going bankrupt: “gradually and then suddenly.” Weeks of escalating tension have left the two longtime adversaries at the brink with hard liners on both sides paving the way toward a military clash.

“Any spark in the region could set off this fire,” says Joe Cirincione, a nuclear weapons policy expert and former adviser to the State Department.

On the campaign trail, Trump frequently criticized America’s interventions in Iraq and Libya as a pointless waste of time, money, and lives—his earlier support of the Iraq invasion notwithstanding—and even described Syria in January as nothing more than “sand and death.” Trump clearly has no desire to mire the US in another foreign war, but surrounded by aides who are cheerleading for a confrontation with Iran, Trump’s blustering style could lead, intentionally or not, to a war more destructive and sprawling than the ones he condemned as a presidential candidate.

It might not take much for Iran to cross Trump’s red line—whatever that is.

Last week, the Islamic Revolutionary Guard Corps, an elite component of the Iranian military, shot down an American drone, “in large part to prove they could do it,” according to Iranian officials who spoke with the New York Times. Trump’s initial response was harshly critical of the regime. “Iran made a very big mistake!” Trump tweeted on June 20. Hours later, he reversed himself and seemed to suggest the attack was literally a mistake. “I find it hard to believe it was intentional,” he told reporters gathered in the Oval Office. The shifting meanings “allow different people to hear what they want,” Maggie Haberman, of the New York Times, observed on Twitter.

These contradictions, Trump’s habit of embellishing and outright lying, and the different pressures exerted by his more hawkish advisers make it difficult to determine where he will draw a firm line regarding Iran. National security adviser John Bolton, who with Secretary of State Mike Pompeo and CIA director Gina Haspel, reportedly urged Trump to strike Iran last week, promised last month that the US would “respond to any attack, whether by proxy, the Islamic Revolutionary Guard Corps, or regular Iranian forces.” This week, Trump narrowed his focus but upped the stakes. “Any attack by Iran on anything American will be met with great and overwhelming force,” he tweeted. “In some areas, overwhelming will mean obliteration.”

….Iran’s very ignorant and insulting statement, put out today, only shows that they do not understand reality. Any attack by Iran on anything American will be met with great and overwhelming force. In some areas, overwhelming will mean obliteration. No more John Kerry & Obama!

It is not clear whether Trump’s red line refers to American assets or people, or whether it extends to Iran’s conventional army, its specialized Revolutionary Guards, or the proxies Tehran trains and funds across the Middle East, including the Houthi rebels in Yemen and several Shia militias in Iraq. These groups vary in their level of obedience to the Islamic Republic and have clashed with American troops in the past, with the Pentagon estimating in April that Iranian proxies have killed at least 603 Americans in Iraq since 2003. “Especially in Iraq or Syria, you could have a US fatality,” Colin Kahl, former national security adviser to Vice President Joe Biden, told reporters on a call last week. “It could happen intentionally if Iran feels squeezed or desperate. It could happen inadvertently because Iran doesn’t have complete control over its proxies.”

A conventional war isn’t likely, but if it happens, Iran has some strategic advantages.

Iran’s undisputed military strength is in its diverse and rapidly-improving array of ballistic missiles, which it has supplied frequently to its allies across the region. One of Trump’s persistent criticisms of the nuclear deal negotiated by the Obama administration and other nations was that it did not cover Iran’s missiles and the regime has repeatedly countered international efforts to limit their production in recent years. In a war with Iran or one of its proxies, the United States would have to grapple with missiles capable of traveling at least 3,000 kilometers, according to the Missile Defense Project at the Center for Strategic and International Studies. “Iran doesn’t have a lot of advanced aircraft,” says Thomas Karako, the project’s director. “Where they’ve put their money is in missiles that can target nearby bases.”

Seventeen years ago, a $250 million war game conducted by the US military pondered the same possible conflict. That exercise, conducted in the lead-up to the American invasion of Iraq, simulated a war in the Persian Gulf, where American troops were promptly defeated. Nineteen US ships sank, including an aircraft carrier, according to political scientist Micah Zenko, who highlighted the war game in his book, Red Team: How to Succeed by Thinking Like the Enemy. Nearly two decades later, the circumstances have changed but the potential cost of another Gulf War remains high, particularly because of Iran’s continuing ability to navigate the narrow Strait of Hormuz.

The US Navy may far outstrip Iran in its number of sailors and diversity of carriers and boats, but the location of any maritime conflict would significantly benefit Iran, which prefers to fight the US as a scrappy underdog on its own turf. Iran has already demonstrated its ability to escalate tensions in the Strait by bombing at least six oil tankers in recent weeks. If the Strait remained open to commercial traffic, ships belonging to the United States or its allies would be vulnerable to attacks, especially if Iranian vessels were able to disguise themselves as civilian transports. The Strait’s narrow shipping lanes—only 1.6 nautical miles wide at certain points—would further constrain how quickly American war boats would be able to respond to attacks from Iranian submarines.

“You’re looking for small boats hidden potentially among plenty of civilian boats in an area that has a lot of commercial traffic,” says John Allen Gay, co-author of the book War With Iran: Political, Military, and Economic Consequences, making it difficult for the US “to achieve a really decisive result.”

A conflict could escalate to the entire region.

War with Iran by necessity would almost have to involve its regional neighbors and adversaries, including Israel, Lebanon, Yemen, Saudi Arabia, Iraq, Syria, and Russia. Iranian proxies could support Tehran by targeting US troops in Iraq or continuing to use their perch in Yemen to bomb Saudi Arabia, which is America’s close ally and Iran’s sectarian enemy. Then depending on the route American bombers take to reach Iran, they run the risk of angering Iran’s neighbors. “You’re either going to fly in over Iraq or fly in over parts of Syria which has very good air defenses,” Gay says. “That’s where the best Russian air defenses are.” Routing the attack through Israel and Lebanon might provide a workaround, but that could draw these countries into the conflict.

Then there’s the economic element. Oil prices would soar if the Strait of Hormuz were closed to commercial traffic. The impact at home might not be immediately felt, but the administration would likely want to avoid a hike in gas prices right before an election year. “In the event of a bigger conflict, at minimum you’re going to see a spike,” Gay says. Global oil prices have remained steady in recent weeks, in part due to the trade war between the US and China weakening demand. But after Iran shot down the drone, oil prices reached the highest point in weeks.

Trump has no exit strategy.

It’s easy to compare Trump’s actions regarding North Korea—ratchet up the rhetoric, saber-rattle for weeks, only to veer toward diplomacy—to what is happening with Iran. Several media outlets have done just that as this crisis with Iran has ballooned. There’s one crucial difference: in North Korea, decades of diplomatic outreach had failed to yield a preexisting deal, but with Iran a multilateral nuclear deal had been reached—and Trump ripped it up. And then he unilaterally expanded the terms of the debate way beyond the already difficult topic of Iran’s nuclear program. Trump and Pompeo have made 12 demands for Iran to meet—including ending its support for all regional proxies and halting its development of nuclear-capable missiles—which in their totality amount to what Wendy Sherman, the lead negotiator for Obama’s deal, told reporters the Iranians view as “not just regime change, but regime overthrow.” Then there is the open question of the war’s objectives: To stop a nuclear program, to attempt to force Tehran’s acceptance of all these demands, or to destroy the current regime and somehow remake the country?

Iran continues to refuse Trump’s offers to negotiate, even as his administration’s “maximum pressure” strategy has devastated Iran’s oil trade. As part of its effort to eliminate Iranian oil exports, the Trump administration announced in April that it would no longer grant waivers to eight countries that had previously been allowed to import Iran’s oil temporarily, sparking immediate reprisals from Turkey and China. Roughly half of state spending in Iran is tied to oil revenues.

“That’s the Iranian red line,” says Gregory Aftandilian, a former Middle East analyst at the State Department who now teaches at Boston University. “Until America lifts the oil embargo, why should we enter into talks?”

Trump showed no signs of backing down on Tuesday when a reporter asked if he had an exit strategy planned in the event of war breaking out. “You are not going to need an exit strategy,” he replied. “I don’t need exit strategies.”