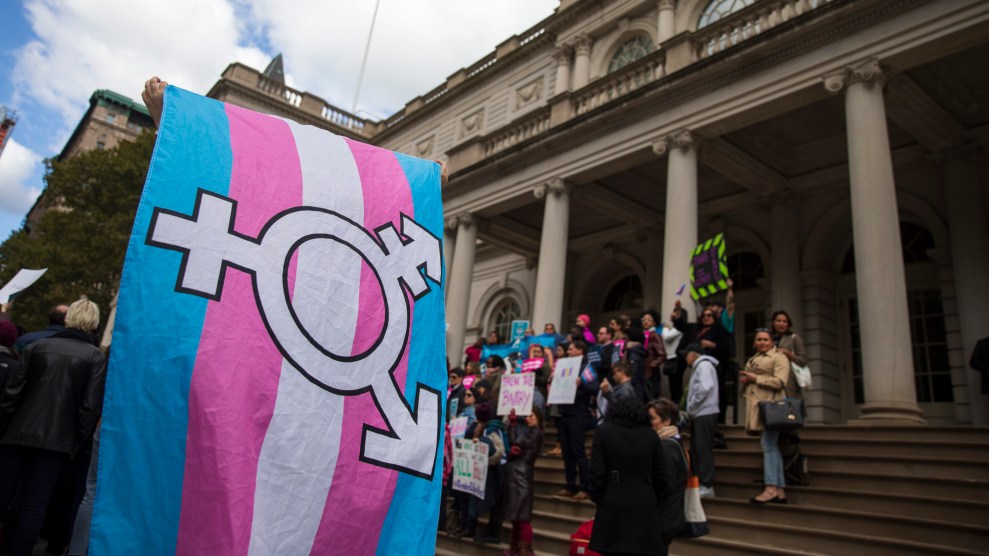 A survey by the Public Religion Research Institute made headlines last week with its finding that 62 percent of Americans say they have become more supportive of transgender rights in the last five years. Media outlets celebrated this “boost” in “support for trans people”. Though the survey, which posed an extensive range of questions to 1,100 people, hints at progress—more than half of Republicans say they would be comfortable having a close friend come out as transgender—when it comes to specific policies that would improve the lives of trans people, Americans’ stances have hardly changed.

Since 2017, when the Public Religion Research Institute, a nonpartisan policy group, conducted a similar survey on trans acceptance, the percentage of Americans who support trans people in the military has continued to hover around 63 percent. And there has actually been a 7 percent increase in the number of Americans who support “bathroom bills,” which require trans individuals to use bathrooms corresponding to their sex assigned at birth, rather than their current gender identity.

So what explains the divide? “People answer favorably to questions about lofty ideals,” says Melissa Michelson, professor of Political Science at Menlo College. “They know that supporting transgender rights is the right thing to say.”

The positive media response to this survey’s findings also missed other nuances, according to Michelson. For example, Robert P. Jones, the CEO of the PRRI, told Time that the “increase in support for transgender rights tracks fairly closely with the large increase in support for gay, lesbian and bisexual Americans.” Noting that opinions on gay rights “changed faster than those on almost any subject in the history of polling,” Mark Mellman at The Hill suggested that the trajectory for trans acceptance is “similar.”

Michelson isn’t sure that the same narrative applies. “It’s too early to say we’re repeating that success,” she says. “I think people are still deeply uncomfortable with the idea of there being more than two genders.” According to the survey, 55 percent of Americans believe that gender is binary. Meanwhile, up to one-third of trans people consider themselves non-binary.

The study implies that people who have a transgender friend or family member are 19 percent more likely to believe in “a range of gender identities” than people who do not. And Jones also suggested to Time that the rising prevalence of such connections may be driving broader acceptance of trans rights. The idea, which social scientists call “interpersonal contact theory,” is that coming out to a loved one as transgender will make that person more accepting of trans people in general.

“The ‘coming out’ movement in the 90’s is widely credited with changing minds about gay rights, because suddenly people realized that they already had gay friends,” says Michelson. “Does this work for trans people? The evidence is mixed.”

Michelson says that the theory is “extremely hard” to study, since there is a chicken-and-egg problem: trans people are more likely to come out to someone that they already believe to be supportive, due to existing levels of stigma and the very real risk of violence, as one study found.

A paper that Michelson co-authored concluded: “Additional research is needed to identify the root causes of attitudes toward transgender people and how those attitudes can be shifted…We need to have a better understanding of how the mass public thinks and feels about transgender people before we will be able to enact the kind of change that the transgender community deserves.”

Some Republican lawmakers appear to be listening: nine conservative Representatives crossed the aisle to support a bill that would defund the trans military ban, which passed 243-183 in the House earlier this week.