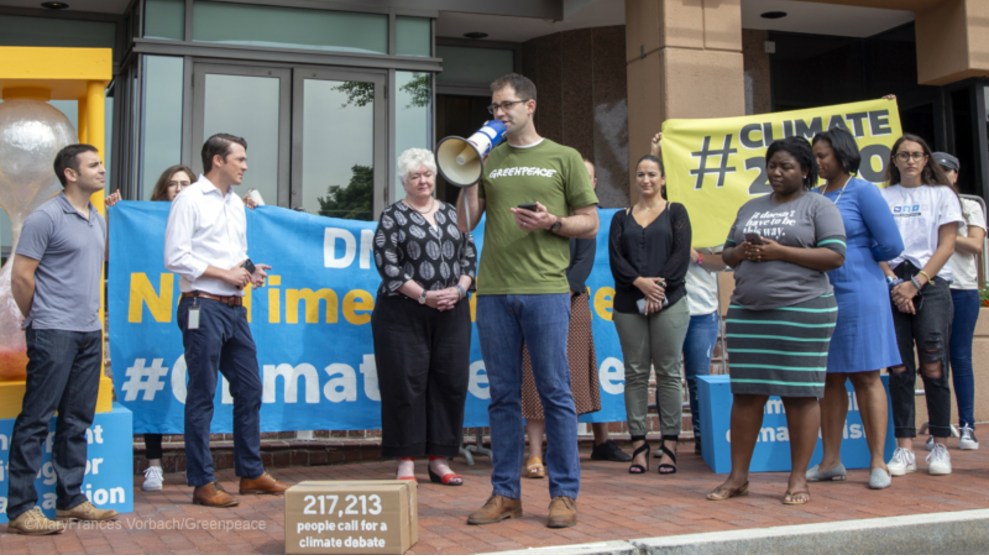 Activists gathered Wednesday at the steps of the Democratic National Committee (DNC) headquarters in Washington, DC, to demand a climate change debate for the 23 contenders in the 2020 Democratic primary.

The pressure for a debate on climate change is only escalating since the Democratic National Committee rejected a call to devote one of its dozen debates to a subject that’s grown in urgency and salience among the Democratic base.

One of the activists, Karla Stephan of US Youth Climate Strike, told Mother Jones that even if the DNC doesn’t agree to hold a debate centered on climate change, she wants the candidates to at least to agree to one so they can still hold the debate. If candidates engage in debates not sanctioned by the DNC, they risk being barred from the main stage.

Karla Stephan of @usclimatestrike tells @MotherJones: “All of these groups have power on their own. But together we are unstoppable.” She hopes that even if the DNC doesn’t agree to #ClimateDebate, candidates will pic.twitter.com/5nXs2zBjBG

Joe Biden, a 2020 Democratic frontrunner, reportedly expressed his support for a climate change debate Tuesday in a video that Greenpeace recorded in Iowa. Janet Redman, Climate Campaign Director for Greenpeace USA, said that they will “continue pressing every candidate to support a climate debate,” adding that the debate “has to do with economic justice, racial justice, generational justice.”

BREAKING: You HAVE to watch this. Joe Biden just agreed to a climate debate on camera. @TomPerez and the @DNC, are you listening yet? RT if you want a climate debate! #climate2020 pic.twitter.com/2mckXAucBD

“All of these groups have power on their own, but together we are unstoppable.” Stephan said, “We’re not settling for soundbites.”