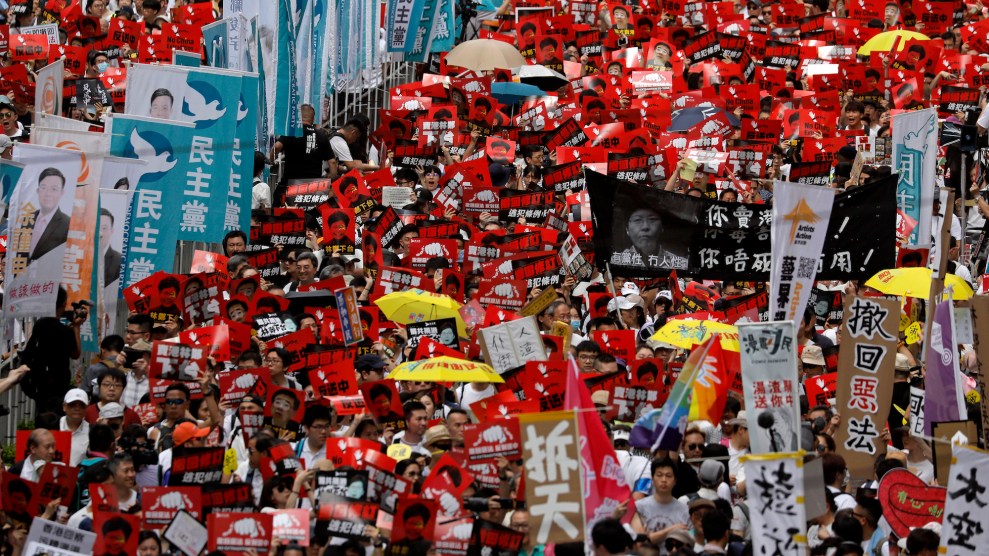 More than a million people took to the streets in Hong Kong Sunday to protest a proposed law that would allow extraditions from the city to mainland China, a move critics say would give China power to remove political dissidents without input from local authorities and judges. Hong Kong’s judicial system is seen as far more independent than those elsewhere in China. The law backed by Hong Kong’s pro-Beijing chief executive, Carrie Lam, is viewed as a significant threat to political, artistic, and academic freedom in the former British colony.

When Britain relinquished control of Hong Kong in 1997 and handed it over to China, the Chinese government had pledged to allow the capitalist territory semi-autonomy for 50 years. But since then, China has been increasingly aggressive in asserting its power over Hong Kong. For the past three years, China’s security forces have kidnapped political opponents and business executives off the streets there without even the pretext of a legal extradition proceeding. Critics have said the proposed extradition law would simply legalize the kidnapping.

Legislators in Hong Kong are scheduled to vote on the proposed law later this month, a decision that was met with a silent protest last week by about 3,000 judges and lawyers concerned with the bill. On Sunday, hundreds of thousands of mostly ordinary Hong Kong residents—from housewife clubs to artists to businesspeople—joined the gathering  and continued demonstrating well into the evening.

Stunning image of the protest in #HongKong today (just posted on @AppleDaily_HK's Instagram account.) Many we spoke to said it was the first time they joined a protest & felt a proposed extradition law would so fundamentally alter the city's freedoms that they couldn't sit back. pic.twitter.com/fUwStzEN1A

The New York Times correspondent in Hong Kong reported that the police were starting to use billy clubs late Sunday night to keep the protesters away from the Legislative Council offices.

Sunday’s protests in Hong Kong came a week after the 30th anniversary of the protests at Tiananmen Square, when the Chinese government brutally massacred hundreds, possibly thousands, of students and other pro-democracy activists who were protesting the corruption of one-party rule. Protesters in Hong Kong held a vigil to commemorate the anniversary, but the Beijing was mute on the subject, as it has been in the past. Its only public comment on the event was to criticize Secretary of State Mike Pompeo for publicly honoring the fallen protesters.