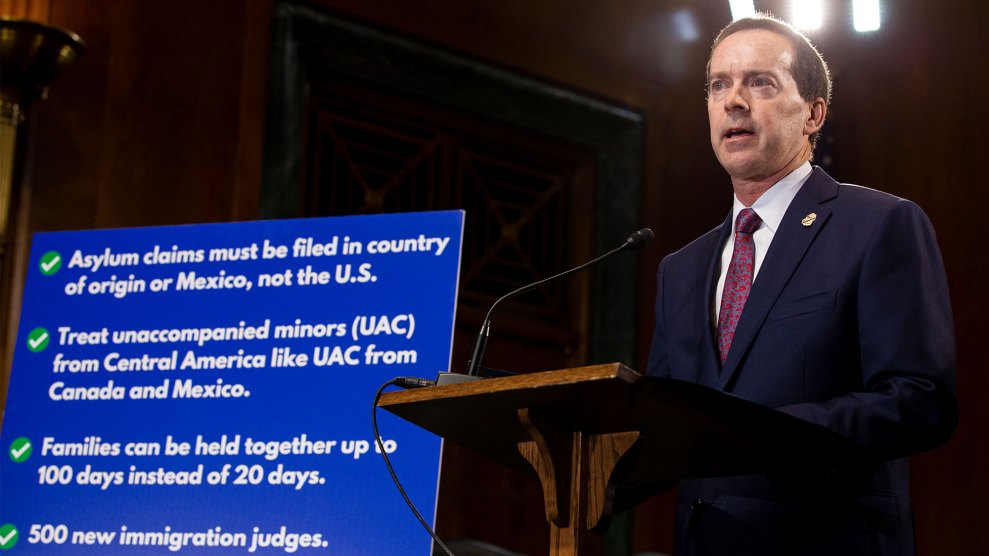 Customs and Border Protection acting Commissioner John Sanders speaks at a news conference proposing legislation to address the crisis at the southern border at the Capitol on May 15.Anna Moneymaker/Getty Images

Update: President Donald Trump is expected to name Mark Morgan the next head of Customs and Border Protection. Morgan is the acting director of Immigration and Customs Enforcement and has been an outspoken supporter of Trump’s border policies. Morgan will be replaced by Matt Albence, ICE’s deputy director.

The head of US Customs and Border Protection announced his resignation Tuesday, following public outrage over the horrifying conditions inside a detention facility for immigrant children at the border. John Sanders is the third top immigration official who has left or been pushed out in as many months.

Sanders announced his resignation, effective July 5, in a letter to employees on Tuesday. He has led the agency for just about two months. Sanders replaced CBP’s former director, Kevin McAleenan, who moved up to replace Kirstjen Nielsen as homeland security secretary.

The Department of Homeland Security leadership has been in turmoil for most of the year, at a time when a record-breaking number of Central American families and unaccompanied children have arrived at the US-Mexico border. The high turnover and lack of stability spans DHS’s three sub-agencies, CBP (which includes Border Patrol), Immigration and Customs Enforcement (ICE), and US Citizenship and Immigration Services (the non-enforcement side that deals with legal migration and visas).

The departures come amid a growing disconnect between President Donald Trump and his immigration enforcement agencies. Last week, Trump tweeted that ICE would be conducting raids to arrest “millions of illegal aliens,” a move that appeared to surprise ICE leadership and contradicted McAleenan’s preference for a smaller, more targeted operation. In the end, the raids didn’t happen, but these types of public threats have become commonplace and strained relations between DHS and the White House.

USCIS Director Lee Francis Cissna got on the wrong side of White House senior policy adviser Stephen Miller, Trump’s immigration guru, and was forced out in April as part of a Miller-led DHS purge that included Nielsen, her acting deputy, and the acting director of ICE.

Out in the field, there have been concerns about morale among immigration enforcement agents, with some employees accelerating their retirement while others “consider alternative employment opportunities,” according to a report by DHS’s Office of Inspector General released May 30.

CBP officials did not immediately respond to a request for comment for this story.