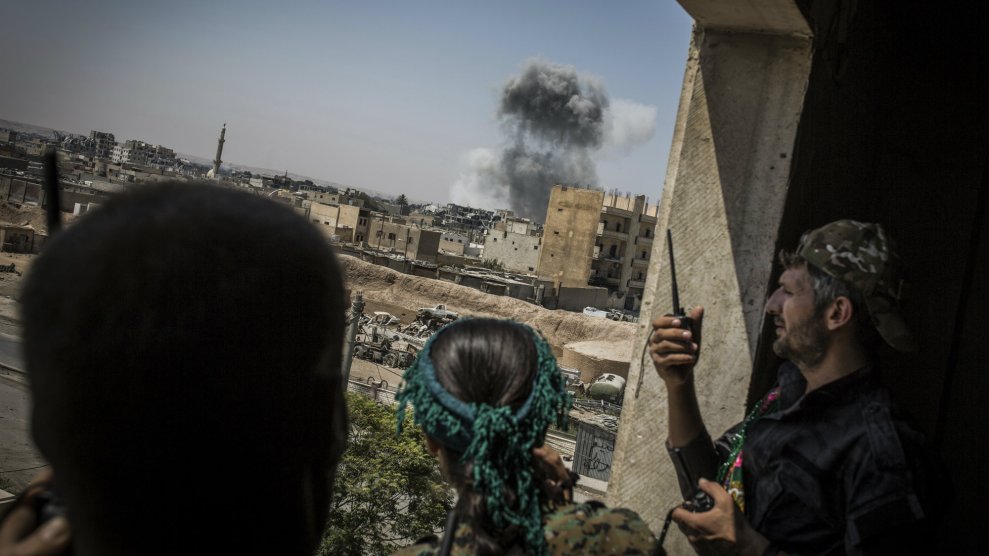 Since the Syrian civil war broke out in the summer of 2011, more than 500,000 people have been killed. Of that total, some untold number of children and other civilians have been killed by the American-led military coalition, which has fought ISIS in Syria and Iraq since 2014. The Pentagon has only claimed responsibility for 1,302 deaths, while respected nongovernmental organizations like Airwars have used on-the-ground tracking reports to arrive at a figure roughly six times that: 7,263 civilians through the end of 2018.

Even though the US has shown a willingness to change its estimates in response to newly-uncovered evidence, its allies in the anti-ISIS coalition, which include major democracies like Britain, France, and the Netherlands, have not been nearly as transparent. Since joining the coalition, Great Britain has claimed responsibility for just one civilian casualty. France, which has fired at least 1,500 air and artillery strikes as part of the coalition, acknowledges zero. The Netherlands claims responsibility for a handful of civilian casualties, but won’t say where or when the deaths occurred.

Civilian harm is inevitable in nearly every armed conflict in human history, but especially against a stateless enemy like ISIS that doesn’t wear uniforms and hides within communities, but without the careful accounting of deaths caused by their troops, US allies risk angering their local partners. “By providing transparency into a particular strike that resulted in a great deal of civilian deaths, the United States and its allies can dispel the enemy’s use of civilian deaths as a propaganda tool,” says Rachel VanLandingham, a Southwestern Law School professor and former chief of international law for US Central Command. “Transparency inures to legitimacy.”

The United States was slow to grasp this problem, but a series of eye-opening reports from Airwars, Amnesty International, and other groups helped. Two years ago, the New York Times dug up evidence that Coalition airstrikes had killed at least 75 men, women, and children in Iraq. At the time, the United States had acknowledged none of these deaths. Only a few months later,Congress finally required the Pentagon to begin releasing its own figures annually. This year’s report, which Congress received on May 1, claimed responsibility for just 120 civilian deaths—roughly ten times smaller than what NGOs have been tracking—but the simple fact of the submission was “a really positive step,” says Chris Woods, director of Airwars.

“You lose a freaking compass and there’s an investigation into how you lost federal property. It’s not the same for civilian casualty tracking. It’s a newer strategic front we just need to conquer.”

American allies have resisted this effort. Marie Forestier, an independent researcher and journalist based in Beirut, found in an April article for the French newspaper Libération that at least “200 allegations of civilian casualties potentially involving the French military have been investigated” by the anti-ISIS coalition since the start of hostilities, but “French army officials refuse to make the results of those assessments public.”

Allegations are first reviewed by military officials who determine based on the time and location of past strikes whether it happened and can credibly be blamed on the Coalition. Even if the Coalition finds itself responsible, a military spokesperson tells Mother Jones the group does not single out a particular member nation “as a matter of policy.”

That’s not always been the case. Early press releases from the Coalition identified which partners joined the US in a particular strike and, until March 22, 2015, the US distinguished in its reports between American actions and those of its partners. “My understanding from senior US military officials is that US Central Command made the change in order to encourage allies to come forward on civilian harm under a collective Coalition umbrella,” Woods says. “That has sadly not happened.”

When this kind of transparency ends, political and military stakeholders are able to “act beyond the parameters of their usual normative reference frameworks,” Cordula Droege and David Tuck of the International Committee of the Red Cross explained in a 2017 essay. In other words, with responsibility diffused among—by the Coalition’s last official count—more than 70 partner nations, no single member feels compelled to step up. When senior US military officials told Foreign Policy, in an investigation published jointly with Airwars in 2017, that its allies had been responsible for up to 80 civilian deaths, no one claimed responsibility.

Partners with authoritarian governments like Saudi Arabia, Jordan, and Bahrain have not conceded responsibility for a single civilian death, but major democracies like Belgium and the Netherlands remain among the least transparent partners overall. Five months ago, Dutch F-16 pilots returned home after four years fighting alongside coalition members in the Middle East, yet the Netherlands continues to not “disclose the dates and locations of the three events in which its aircraft are known to have harmed civilians,” Maike Awater of Airwars wrote in January.

Even relatively transparent nations like Great Britain have fallen victim to this mentality. During the bloody battle to retake Raqqa, then the de facto capital of ISIS in Syria, in the summer and fall of 2017, the Brits targeted a majority of their strikes at buildings, according to a report Airwars submitted to Parliament, but still did not acknowledge a single civilian casualty. As fighting intensified in Raqqa, the Coalition in 2017 launched “nearly 40,000 munitions from aircraft in Iraq and Syria, almost 10 times the amount fired by US forces in Afghanis­tan that year,” Mother Jones reporter Shane Bauer noted in his recent investigation into the Syrian Civil War.

By the time ISIS was ousted from the city, Coalition airstrikes had razed entire buildings, leaving up to 80 percent of the city uninhabitable. Airwars called the absence of any civilian casualties in Raqqa “a statistical impossibility given the intensity of fighting.”

Donatella Rovera, senior crisis response adviser at Amnesty International, told me that French authorities never responded to her detailed inquiries for information during the research for a landmark report last year on the Coalition’s role in liberating Raqqa, which attributed the city’s destruction in large part to the Coalition. The Americans and British responded but their engagement has been “completely reactive,” she said. “Two years later, they should have done this work. They should know who they’ve killed.”

Pressure from the United States, the undisputed leader of the Coalition, could spark greater transparency from its allies, but under President Donald Trump, that pressure does not seem likely. The Pentagon has not held an on-camera press briefing in more than a year and, in March, Trump revoked an Obama-era rule requiring the government to disclose civilian deaths occurring outside active war zones—most likely from CIA activities. VanLandingham, the former chief of international law for US Central Command, told me part of the problem is that counting civilian casualties is not something ingrained in military culture.

“You lose a freaking compass and there’s an investigation into how you lost federal property,” she said. “It’s not the same for civilian casualty tracking. It’s a newer strategic front we just need to conquer.”