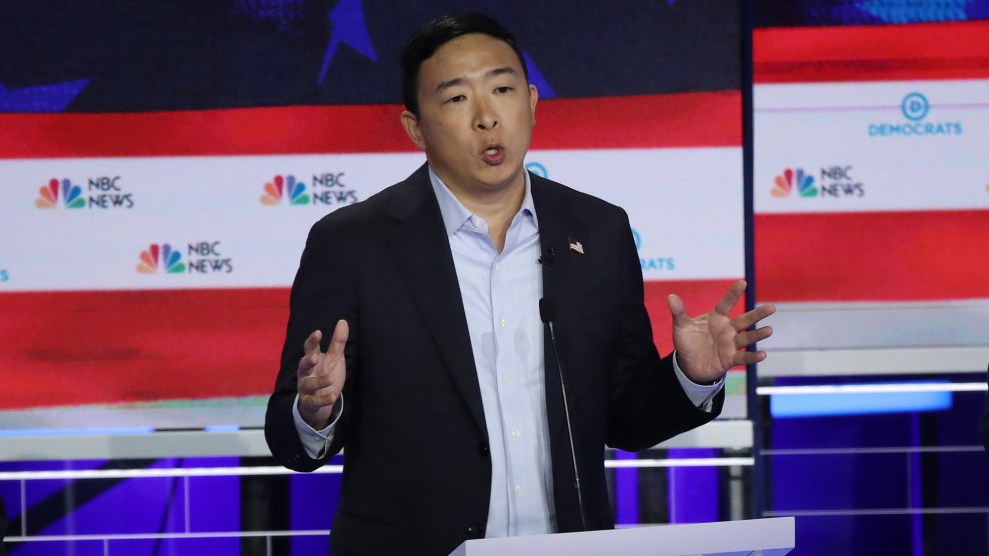 Trolls on a prominent far-right message board tried to launch a campaign to get other users to vote for two marginal candidates, Andrew Yang and Marianne Williamson, in internet polls on who won Thursday’s Democratic presidential debate.

Users of the 4chan message board /pol/, infamous for its rampant sexism and racism, pushed others on the board to inflate Yang’s and Williamson’s position in online polls about the Democrats candidates’ performance in the debates. “VOTE FOR YANG IN THIS POLL. HE NEEDS TO WIN IN EVERY POLL WE CAN FIND,” a user wrote in one pro-Yang thread, linking to a Reddit poll.

It’s impossible to know the actual impact of any coordination efforts, especially as more right-wing and troll groups move toward private chats on platforms like Discord and Telegram, where they can carry out coordinated campaigns less visibly, as Yang supporters did earlier this year. However, coordination might have had an effect in skewing a poll conducted by the Drudge Report. Despite speaking for only around two minutes and 50 seconds, the least of any candidate on stage, Yang won the Drudge poll. Williamson spoke the third least, for about five minutes, but got third in the poll, narrowly edged out by Kamala Harris.

Their strong performance in the Drudge poll contrasts with very low polling numbers going into the debate: Yang was around 1 percent in several polls, and Williamson didn’t even secure a full percent in most polls.

Yang and Williamson didn’t perform as well in other online polls posted in 4chan boards, including ones run by NJ.com and the Washington Examiner. Still, at the time of this story’s publishing, Yang was in second place in both polls.

Internet trolls similarly attempted to influence polls in support of Tulsi Gabbard after the first Democratic presidential debate on Wednesday. Far-right and alt-internet personalities hyped Gabbard’s performance after the debate, and as NBC first noted, trolls on 4chan and a pro-Donald Trump subreddit pushed other users to inflate Gabbard’s numbers in the Drudge poll and other debate polls.

Standard, professionally conducted polls cited by news organizations are more rigorously run because they’re generally only open to people pollsters contact, not anyone on the internet, making them less prone to manipulation. Even so, some right-wing news outlets, including Breitbart and the Daily Caller, ran stories about Yang winning the Drudge poll, without addressing its vulnerability to being manipulated.

Thursday night wasn’t the first time Yang got a boost from 4chan and other seedy internet communities. In February, his supporters coordinated raids on 4chan discussion boards organized on pro-Yang Discord servers, posting memes and messages in support of the Democratic candidate. A founder of one Yang Discord told Mother Jones at the time that the group was made up of many former Trump supporters who felt abandoned by the president and thought Yang’s proposal for a $1,000-a-month universal basic income would be a better deal.

Despite the attempt at coordination on /pol/, Yang’s support there is by no means unanimous. Since Yang came to prominence on the site, anti-Yangers on 4chan have fought against his devotees in the imageboard, calling them “shills.”

Yang has also repeatedly disavowed support from the far right since gaining traction among their community.

“I’ve already disavowed any racist and hateful ideologies,” he told Mother Jones in February. “I don’t want their support.”