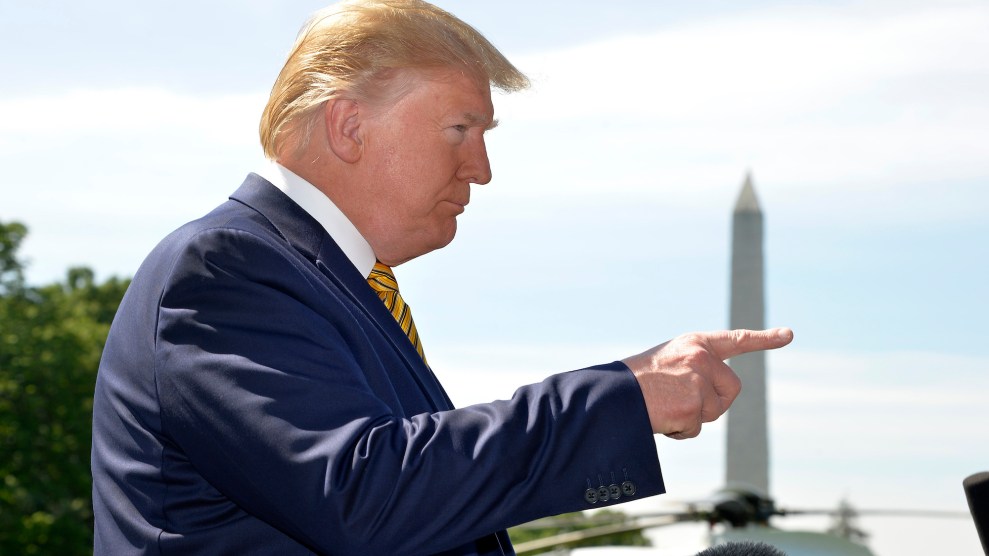 President Donald Trump makes remarks to the press as he departs the White House for a weekend at the presidential retreat at Camp David.Mike Theiler/AP

President Trump announced that the United States will impose new sanctions on Iran next week as a potential military confrontation between the two countries looms.

The president made his announcement on the White House lawn on Saturday before he boarded his helicopter to spend the weekend at Camp David, the presidential retreat. “We’re moving forward with additional sanctions on Iran,” the president told reporters. “Some of them are in place. As you know, we have about as strong a sanction grouping as you could possibly have on any country, but we’re putting additional sanctions on.”

The sanctions are part of the high-pressure economics tactics Trump has relied on to force Iran to curb its nuclear program. Last year, the president pulled the US out of the agreement that he had called the “worst deal ever” on the 2016 campaign trail. Under the deal, Iran agreed to end its nuclear development program for a decade in exchange for billions of dollars in sanctions relief. Reports suggested that, as of May 2018, Iran had abided by the accord’s provisions. But on Monday, Iranian officials said its stocks of low-enriched uranium—a key component of nuclear weapons—were poised to breach the quantities agreed upon limits outlined in the agreement.

The president affirmed his announcement in a string of tweets that blamed the “terrible Obama plan” for encouraging the development of nuclear weapons in the country.

Iran cannot have Nuclear Weapons! Under the terrible Obama plan, they would have been on their way to Nuclear in a short number of years, and existing verification is not acceptable. We are putting major additional Sanctions on Iran on Monday. I look forward to the day that…..

Trump’s decision comes after a week of escalating tensions between the two nations. On Thursday, Iran hit a US surveillance drone after the Trump administration accused Iran of attacking two foreign-owned oil tankers traveling in the Strait of Hormuz. Trump soon ordered a retaliatory strike against Iran—but quickly canceled it after he learned it would kill 150 people. He defended that decision to reporters on Saturday, saying he “didn’t like the idea of them knowingly shooting down an unmanned drone and then we kill 150 people.”