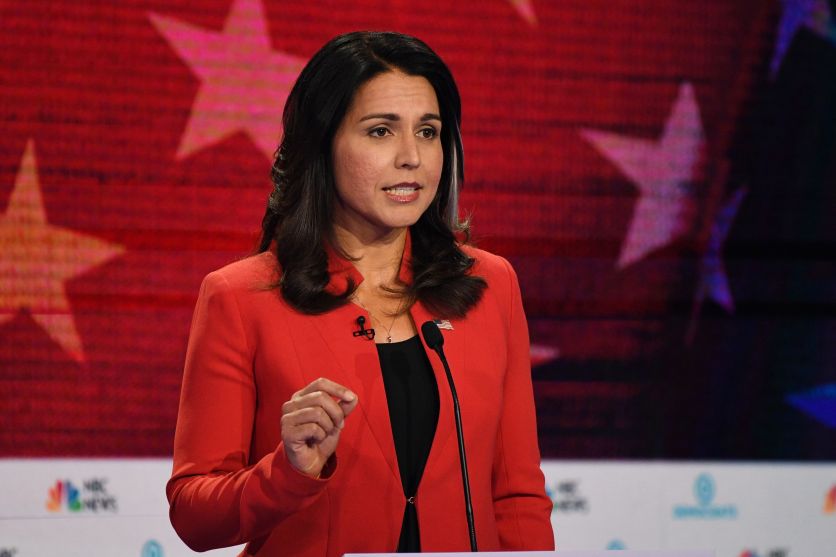 High-profile right-wing and alt-right internet trolls like Jack Posobiec, fellow Pizzagater Mike Cernovich, and Infowars‘ Paul Joseph Watson praised Gabbard on Twitter for her performance alongside nine other candidates on the Miami stage.

Users on 4chan affectionately referred to Gabbard as “mommy.”

Cernovich called Gabbard the “breakthrough star of the night,” while Posobiec retweeted a post calling for “a movement to push Trump to hire Tulsi Gabbard as Secretary of State.” (Documents leaked this week show that Gabbard, who served in Iraq, was considered by the Trump transition as a possible Secretary of Veterans Affairs.)

A flash poll posted by the right-leaning Drudge Report marked Gabbard as the winner. While such surveys are statistically meaningless, the morning after the debate Watson tweeted, referencing the poll: “Leftists are FURIOUS Tulsi Gabbard won the debate. She was the only authentic person on that stage. What does that tell you? #Drudge”.

Users on the notoriously racist and sexist message boards 8chan and 4chan, which both serve as internet hubs for far-right trolls, voiced their support for Gabbard on debate night. In 8chan’s overall discussion thread for the event, Gabbard was mentioned far more than any other candidate. Users on 4chan also made several discussion threads dedicated to Gabbard’s night at the debate, affectionately referring to her as “mommy.”

Such support for Gabbard isn’t entirely surprising. Since January, when Gabbard announced her campaign, elements of conservative media and the far right have been receptive to the Hawaii politician and aspects of her record, especially in foreign policy, that don’t track neatly with normal progressive or Democratic policy positions. Some internet right-wingers who also feel like their politics don’t match well with most candidates, even Republicans, have felt a common cause.

Trolls have been attracted by her isolationist views and her willingness to criticize Israel, a country they believe Trump and other politicians have been too cozy with, along with her accusation earlier this year that Democrats participated in “religious bigotry” during their questioning of a Trump judicial nominee.

But support for Gabbard in such circles has somewhat faded in the face of a number of other Democratic candidates, including Andrew Yang, who has also caught the attention of segments of the far-right internet troll bloc. Like Gabbard, Yang’s relatively unconventional policies (namely his $1,000 monthly universal basic income proposal) have been attractive to 8chan and 4chan users as well as to personalities on the alt-right, including white nationalist Nick Fuentes, who feel like Trump didn’t come through for them. Yang has repeatedly disavowed their support as he’s tried to carve out his own base of support.