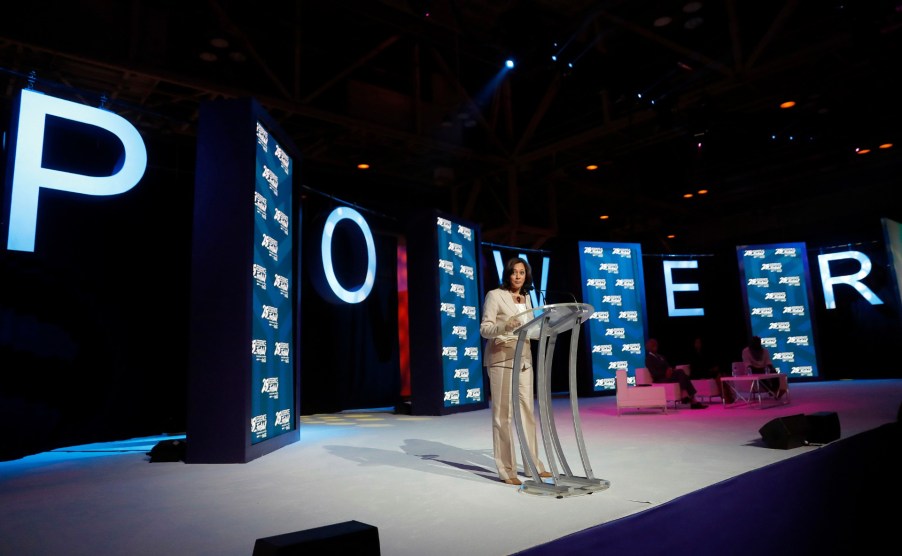 For 25 years, Essence Magazine’s annual New Orleans music festival has been a premiere destination for black women who want to take in some culture and maybe go on a girl’s trip. This year, the festival also played host to the Democratic party’s leading candidates for the presidential nomination. Those who attended—Bill de Blasio, Michael Bennett, Cory Booker, Pete Buttigieg, Kamala Harris, Beto O’Rourke, and Elizabeth Warren—used the forum as an opportunity to make their own public and policy appeals to black women, a constituency that in recent years has been acknowledged as the party’s most reliable voting bloc. Their influence isn’t new, but never before have such powerful politicians acknowledged it, and fought for it, so plainly and in a venue so singularly devoted to black excellence. Unsurprisingly, some did it more successfully than others.

Harris, still riding a wave of donations and a bump in the polls after going after Joe Biden for his opposition to busing, made the most direct appeal. She announced a new $100 billion plan aimed at supporting people of color who want to buy homes. Home ownership is the leading source of wealth in America, and the disparity in home ownership, particularly between white and black families, is often cited a main driver of the racial wealth gap. One rather infamous report from 2010 estimated the median net worth of black women to be just $5. Another 2011 study from Demos found that the median white household had over $111,000 in wealth, while black families had an average of just over $7,000. “Black and Latino homeowners,” the Demos report concludes, “saw less return in wealth on their investment in homeownership: for every $1 in wealth that accrues to median Black households as a result of homeownership, median white households accrue $1.34.”

Harris’ policy, detailed on her campaign website, offers a broad overview of public policies that worked to cripple black families across generations—redlining, the G.I. bill, the subprime mortgage crisis—before ticking off a list of potential remedies, including $25,000 grants to help with down payments and closing costs for people in communities that have been historically redlined. “We must right that wrong,” Harris said about redlining, “and after generations of discrimination give Black families a real shot at homeownership—historically one of the most powerful drivers of wealth in our country.”

.@KamalaHarris brought down the house again today at #EssenceFest —> “The fight of black women has always been fueled & grounded in faith & in the belief of what is possible…” 🔥 @Essence @essencefest #ForThePeople pic.twitter.com/xnTqpRClgn

Meanwhile, Warren, who has long touted a somewhat similar housing fix called the “American Housing and Economic Mobility Act,” rallied for new rules that require federal contractors, who employ about a quarter of the country’s total workforce, to diversify those hires. In an accompanying Medium post on Friday, Warren explicitly vowed, if elected, to issue a set of executive orders that would “boost wages for women of color and open up new pathways to the leadership positions they deserve.” At the festival the following day, Warren went even further, saying that it was the government’s job to help ensure this type of fairness. “It’s up to the federal government to say what the terms of those contracts are,” Warren said. “It’s not enough to talk the talk about equal pay for equal work. It’s not enough to talk the talk about the diversity of your work force. You’ve got to walk the walk, or you’re not getting those federal contracts.”

Warren and Harris are the two leading female contenders for the nomination—and both are riding a recent wave of momentum—and while they broke the most new ground this weekend, they weren’t the only ones who made a direct appeal to women of color.

Booker, also speaking at Essence Fest, reiterated his proposal to create savings accounts for every child born in the United States, and repeated his idea of creating an “Office for Reproductive Freedom” to target what many experts call the black maternal health crisis.

Buttigieg, who has publicly been struggling to appeal to black voters, even got in on the action, stopping by the festival to add the somewhat cringeworthy remark that black women aren’t just the backbone of the Democratic party, but the “bone and sinew that make our democracy whole.”

sinew?! what in the body horror https://t.co/6hGB5QIsxz

Each proposal signaled a shift in Democratic party strategy from previous elections. Yes, they’re courting black women voters, because those are some of the voters—particularly in the lead up to the South Carolina primary—that really matter at this point. (More evidence: See Doug Jones, Alabama.) But these overt appeals to black women show candidates are testing the waters to see if they should go against traditional party strategy, or stick with it.

One defining intra-party fight since 2016 has been whether candidates should work harder to appeal to working class voters (read, white working class voters) or focus on energizing and expanding growing bases of support in immigrant and communities of color. (Just look to at Georgia’s 2018 Democratic primary for governor.) Black women voters are reliably Democratic and hugely active in presidential campaign cycles. They also oppose Donald Trump in higher numbers than other voters—only 4 percent voted for him in 2016, compared to 13 percent of black men.

The latest slew of proposals also represent something else, though. These candidates are essentially offering reparations—or at the very least, ideas that have been battered around as part of what could eventually be in a broader, national reparations package. But note, not one candidate there this weekend referenced “reparations” by name, despite all of them expressing support for or co-sponsoring legislation that would establish a commission to study the issue.

For all the hand-wringing about how Bernie Sanders and Alexandria Ocasio-Cortez have pushed party to the left on economic and social policy, and how dangerous that could be in a general election against Trump, it’s clear that, rhetorically speaking, top presidential candidates are only willing to go so far. More than a year before the thick of a general election, candidates are testing out bold ideas, but stopping just short of calling them what they are—at least, when it comes to race. That said, releasing plans that do stop just short of what some might call reparations or offering up a radical-sounding “office of reproductive freedom” are important starting points. Not just for the policies themselves, but for the voters who might be excited by them.