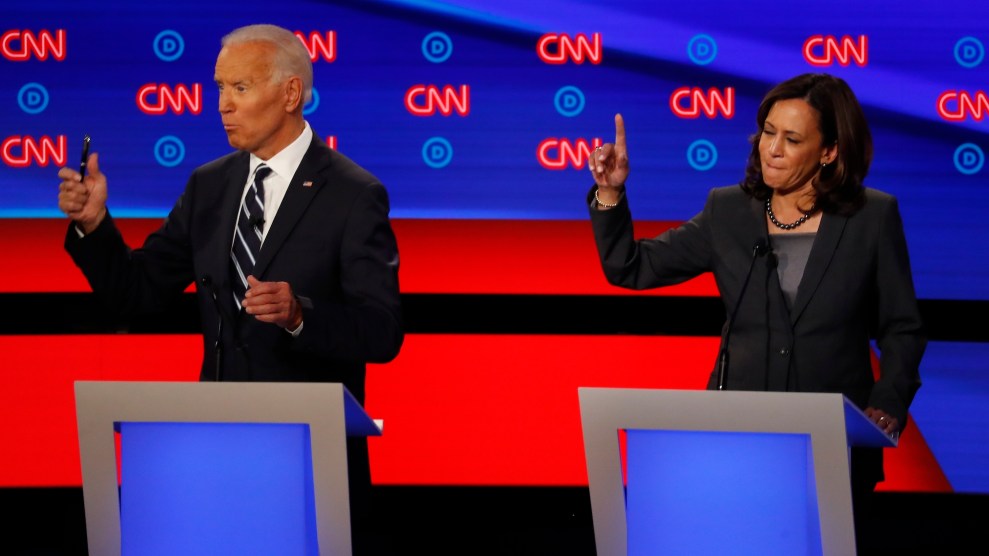 After months of not clarifying where, exactly, she stood on the details of health care reform, Sen. Kamala Harris released her idea for a version of Medicare for All earlier this week, which seemed designed to give her a specific platform to discuss at Wednesday’s Democratic primary debate. And the night kicked off on just that topic. “I designed a plan,” Harris said, “where, yes, responsive to the needs of American families, there will be a public plan, under my plan for Medicare, and a private plan, under my plan for Medicare.”

Wait, what? The initial question that provoked her statement read like parody in hindsight: CNN’s Dana Bash noted that former Vice President Joe Biden had described Harris’ proposal as “part of a confusing pattern of equivocating about your health care stance.” What did she have to say to that?

But instead of clearing up the confusion, Harris struggled to explain what she had in mind. A few minutes later, she defended her decision to expand Medicare coverage to the masses by noting that “millions of seniors are going into the Medicare system and they are getting full coverage and the kind of coverage they need.” Harris neglected to note that the current Medicare system is often criticized for not offering dental or vision coverage—or that her very own would plan remedy those shortcomings.

Biden quickly took aim at Harris’ words, but his rebuttal didn’t offer much detail about what his own plan would entail, as the former vice president simply noted that health care was the most important issue, and that “you can’t beat President Trump with double-talk on this plan.” But over the next 45 minutes, all that seemed to emerge from the two Democratic frontrunners was “double-talk” that did little to clarify where either candidate stood on health care.

Both campaigns had strived to stake out their territory on health care since they faced off during the first round of debates in June. Earlier in July, the Biden campaign released a plan that is essentially a beefed-up version of the Affordable Care Act—along with the addition of offering a public option for people who don’t have, or don’t like, employer-based coverage. And on Monday, Harris shared her much-anticipated vision, which suggested a decade-long transition to a single-payer plan that would reserve a more limited role for private insurance.

But if primary voters had hoped to walk away from Wednesday’s debate with some of the key points of those health care platforms, they were sorely disappointed. Lucidity, it seems, only extended to the prior evening’s sparring, when former Maryland Rep. John Delaney and Ohio Rep. Tim Ryan served as foils to Sens. Bernie Sanders (Vt.) and Elizabeth Warren (Mass.), who used the formers’ jabs as opportunities to lay out their vision for single-payer health care.

The lackluster delivery on Wednesday raised questions as to how well either Biden or Harris even understood what was in their own plans. While Harris underscored the motivation behind why health insurance shouldn’t be tied to employment, she wasn’t able to outline the precise circumstances under which employers could offer private insurance to their employees. “Private insurance companies and private carriers, if they comply by our rules and play by our rules, will be able to offer [companies’] employees health care coverage under a private Medicare plan or they can have the option of a public Medicare plan,” she said. And when the former VP charged that the plan would be too expensive costing $3 trillion per year, Harris sidestepped explaining how she’d pay for that cost, only offering up that “the cost of doing nothing is far too expensive. Second, we are now paying $3 trillion a year for health care in America. Over the next 10 years, it’s probably going to be $6 trillion. We must act.”

Biden, meanwhile, insisted that everyone would be covered under his plan, even though an estimated 10 million Americans wouldn’t be, and he mistakenly said his plan would cap copays at $1,000 (his proposal is to actually limit deductibles to $1,000 per year).