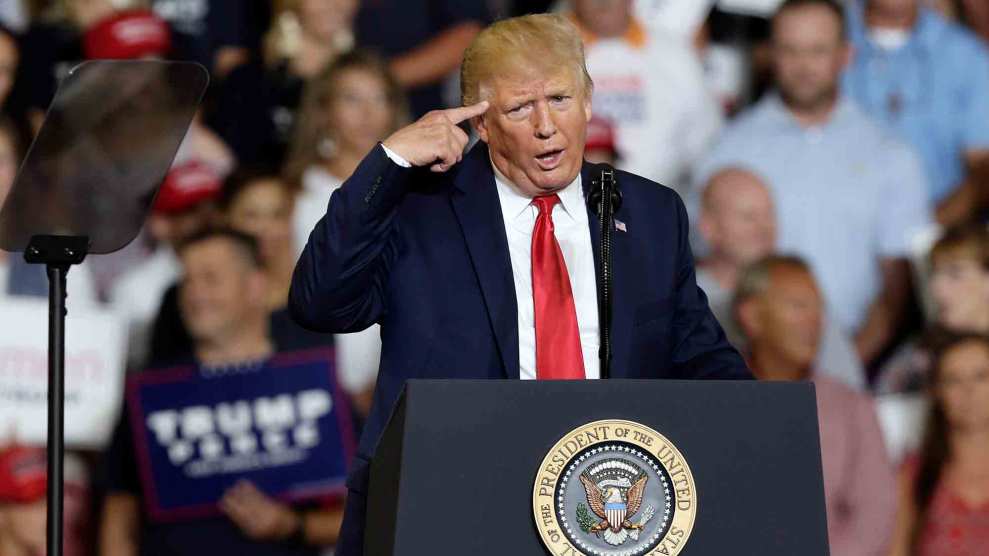 Donald Trump’s outburst of nativistic racism—viscerally and putridly displayed by his “go back” tweet-attack on four congresswomen of color, and the subsequent and shocking (even for Trump) “send her back” rally in North Carolina on Wednesday night—has been a clarifying moment. It seems the culmination of his years-long effort to fashion a politics of white identity, racial resentment, and hatred, even though a new bottom will likely be hit tomorrow, or the next day, or the following week. And Trump’s bigotry and demagoguery are in full public view, undeniably the lifeblood of the Republican Party. As Trump rants and fuels the flames of animus and malice, party operatives zap out emails attacking “deranged” Democrats and falsely asserting, “The socialist Democrats continue to make anti-Semitism a core tenet of their unhinged platform.” Trump is leading a crusade of fear, loathing, and lies, and preying on prejudice and ignorance. But our racist president didn’t reach this dangerous position on his own. He is following a path—and perhaps turning it into a superhighway—established long ago by the party he now helms.

The few Republicans and conservatives tut-tutting Trump’s rampage of racist rancor ought to know that the history is clear: Their party has been exploiting bigotry and acrimony for decades. There was Richard Nixon’s Southern Strategy, which aimed to attract white voters opposed to civil rights advances. Ronald Reagan famously campaigned against “welfare queens” and hailed “states’ rights”—barely coded language deployed to achieve the same results.

More recently, top Republicans have played similar versions of this despicable game. As John McCain’s running mate in 2008, Sarah Palin claimed that Barack Obama, the first African American presidential nominee of a major party, was “palling around with terrorists.”  (This week Kellyanne Conway, the senior Trump adviser, said the four congresswomen Trump assailed represent a “dark underbelly in this country” and that some of them have been “palling around with terrorists.”)

In 2009, then–House Speaker John Boehner and other GOP leaders endorsed tea party hate when they hosted an anti-Obamacare demonstration on the steps of the Capitol, where enraged protesters chanted, “Nazis, Nazis,” referring to Democrats supporting the Affordable Care Act. (Three black members of Congress claimed that tea partiers at the rally called them the n-word, and one said he was spat upon.) During the 2012 campaign, GOP standard-bearer Mitt Romney rejected the racist birther conspiracy theory championed by Trump but he enthusiastically accepted Trump’s endorsement, legitimizing the racist reality TV star as a GOP kingmaker. Moreover, Romney advanced a more subtle form of the otherism that animated Trump’s birtherism. He insisted that Obama “fundamentally does not believe in the American Experiment.” And a top Romney surrogate, former New Hampshire Gov. John Sununu, exclaimed, “I wish this president would learn how to be an American.”

The pattern is obvious: The guys at the top of the Republican Party have long tried to take advantage of racial conflict and political divisiveness. At times, they have even encouraged it, believing that would help them win elections. And there’s no better example than Newt Gingrich.

Decades before Gingrich was a Trump-adoring Fox News bloviator, he was speaker of the House. And before that he was a bomb-thrower. In fact, he became speaker partly because he weaponized hate. Elected in 1978, Gingrich was a back-bencher in the House of Representatives when the Republicans appeared to be in a permanent minority. His strategy was to blow up his own party so he could take control and lead it to the majority—and one of his big ideas was that the GOP, in order to succeed, had to create more division within the national discourse.

He established a political action committee called GOPAC to help Republican candidates across the country become more effective campaigners. And in 1990, the group distributed to GOP contenders a pamphlet called “Language: A Key Mechanism of Control,” which encouraged the candidates to “speak like Newt”—that is, to rely upon sharp and divisive rhetoric. It presented a list of 30 “optimistic positive” words to use, including “freedom,” “truth,” and “family.” It also provided a list of “contrasting” words: “crisis,” “decay,” and “red tape.” And this second list recommended going to extremes. Republican candidates, it noted, should call Democrats “shallow,” “radical,” “incompetent,” “pathetic,” “sick,” “bizarre,” and “traitors.” Gingrich’s group was urging GOPers to engage in all-out rhetorical war, going beyond arguing over policies to engaging in the politics of personal destruction. Which was one of Gingrich’s own favorite tools. (The good Newt loved to talk about policy; the bad Newt embraced and relished hostile name-calling and discordant combat.)

And the nastiness paid off. The belligerent Gingrich led his Republicans to the majority in the House in 1994.

The morning after Trump’s North Carolina rally, I called Frank Luntz, a Republican pollster and consultant who worked with Gingrich in the 1990s, and asked him about this memo. He called it “stupid-assed,” adding, “It’s the most destructive political memo written in modern politics. All it did was teach hate and division…It’s a precursor of what’s going on today.” (Though Luntz has previously been associated with this memo, he says he was not working for Gingrich when it was drafted and that it was composed by a longtime Gingrich aide named Joe Gaylord. Gaylord did not respond to a request for comment.) “That memo,” Luntz says, “is as cynical and evil as anything that’s been written in American politics.”

Not every Republican candidate has adopted this memo as his or her playbook in the past three decades. But its spirit has certainly imbued a significant amount of GOP action. Much of the Republican and conservative attack on Bill and Hillary Clinton during his presidency focused on extreme and often outlandish personal attacks. (Religious right leader Jerry Falwell, a major ally of the GOP, hawked a video in the 1990s claiming the Clintons were responsible for dozens of murders in Arkansas.) And during the Obama years, the tea-partyized GOP played footsy with birtherism and exploited Fox News–fueled paranoid notions that suggested (or even asserted) that Obama was a secret Muslim socialist plotting the destruction of the United States.

Trump has embraced the Newt way. He runs on hate. He turns political opponents into evil enemies, and he does so with an emphasis on race. He exploits and whips up fear. None of this is new for the Republican Party. But Trump—who on Thursday claimed he disagreed with the “send her back” chant at his North Carolina rally—has conveniently taken off the mask and not bothered to hide his appeal to the worst sentiments. And most of the GOP seems just fine with this. The few complaints from within Trump’s own party have been mild and inconsequential. A touch of hand-wringing. Not the way I would put it. We should talk about other things. No outright denouncements of Trump’s racism, because once a Republican heads in that direction, he or she will be a person without a party, given that Trump has made his vicious fear-mongering the core of his campaign.

So what does Luntz, who has been a GOP strategist for much of this time, think of Trump’s demagogic breakout? (Luntz, who was at odds with Trump during the 2016 campaign, has reportedly been advising the White House since his old friend Mick Mulvaney became Trump’s chief of staff.) “I don’t want to go there,” he says. “I’m not answering this for anyone. I don’t want to comment. It’s not what I would do. It’s not what I would say.” And Luntz, who blames “both sides” for the toxic political environment, continues: “But I will tell you this. I’m afraid for the country. I do not think we know how low we can go…I know what the outcome is. It’s bad. It’s France in 1793. It ends up consuming everything.”

The GOP has made use of race-driven and hate-propelled demagoguery since the early 1960s. But it has mostly done so in a manner that preserved deniability and would be acceptable at the country club. To a certain degree, Gingrich changed that. But Trump, the owner of several country clubs, has decided that in his world no niceties at all are needed. He has essentially said to the party, “Thanks for the lift, fellows, I’ll take it from here.” And he sees no reason to pretend. His campaign is about race and hate. He is not an aberration. He is the logical outcome of decades of Republican politics. He has exposed the party’s dark soul. And now he is its soul.