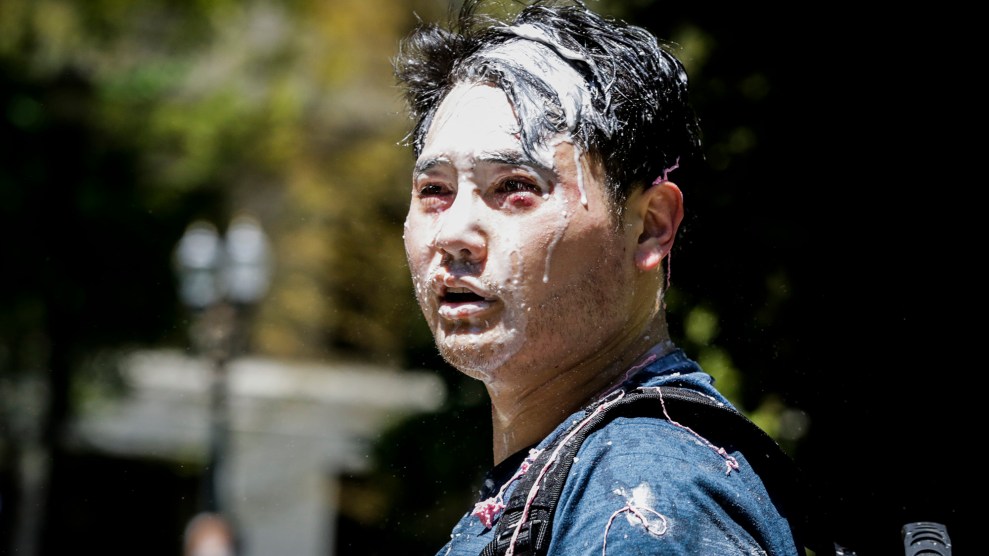 Conservative writer Andy Ngo after being hit with a milkshake during a Proud Boys rally in Portland on June 29. Ngo was later physically attacked by protesters and hospitalized.Moriah Ratner/Getty Images

A right-wing meme was born this weekend after Portland police said they’d been informed that Antifa protesters had pelted far-right demonstrators with cement milkshakes. Conservative internet trolls, including Pizzagate conspiracy theorist Jack Posobiec and writer Ian Miles Cheong, pounced, tweeting that left-wingers were pelting people with cement drinks. Their followers ran with it, posting photos of concrete burns suffered by the demonstrators.

Except that none of it was true. There’s no evidence that the milkshakes contained cement. The photos were fake. And the police got it all wrong, and in the process birthed a right-wing internet movement based on a falsehood.

Here’s what actually happened: The Proud Boys, a neo-fascist group, held a rally in Portland on Saturday. Protesters aligned with Antifa, the anti-fascist movement, showed up, and some of them sold vegan milkshakes to other protesters. Throwing milkshakes, or “milkshaking,” has become a left-wing protest tactic, aimed at embarrassing the far right, and some of the protesters proceeded to pelt Proud Boy demonstrators with their drinks, according to reports.

No one seems to have actually been burned by concrete—at least no one reported evidence of it to law enforcement. So where did this idea come from? It started with a tweet from the Portland Police Bureau on Saturday, stating that it had “received information that some of the milkshakes thrown…contained quick-drying cement.” The police later told Willamette Week reporter Katie Shepherd that an officer at the protests had thought he noticed quick-drying cement on a milkshake cup, prompting the tweet.* The police subsequently received an anonymous email claiming that Quick Rete Cement Mix had been added to the milkshakes, the bureau told Shepard.

Headlines in conservative media outlets highlighted the allegedly violent tactics of the milkshake-throwers. “Antifa, conservative protests turn violent as demonstrators throw milkshakes of quick-dry cement at police and onlookers,” Fox News reported Saturday. (It has since removed the mention of cement from the headline and rewritten its story to include less definitive language about the cement milkshakes.) “Conservative Journalist Andy Ngo Beaten Up and Hit With Cement,” read the headline of the conservative website PJ Media.

The stories spurred rage online against Antifa on the basis of something that very likely never happened. Misinformation spiraled further as one troll posted fake pictures about concrete burn victims on Twitter. The episode allowed the Proud Boys and their far-right allies to try to reverse the narrative and score sympathy points, instead of being chastised for their racism and support of fascism.

After the police tweet about the cement milkshakes, someone anonymously emailed the police department that “the recipe to the milkshakes used today is: -Soymilk – Quick Rete Cement Mix – Other Chemical Additives to cause long term injury and burns.” The sender added, “We hope the piggie officers and proud boys enjoyed the shake back!”

It’s unclear who the emailer was or what motivated him or her. But regardless, the impact was that misinformation was laundered through the police.

“Antifa and the Proud Boys all utilize social media to push their stories and narratives upstream,” says Ben Decker, who runs the media and tech investigations consultancy Memetica and was previously an internet extremism researcher at Harvard’s Shorenstein Center. “They use any means, whether it’s a Twitter verified blue tick or a trusted media institution to do that.”

Decker adds, “The idea of this op was to gaslight and attack Antifa. More negative posts about Antifa make it easier to find negative information about Antifa, true or not.” The allegations of cement, he says, made the incident appear far more serious and helped push it across the internet in order to paint Antifa in a negative light.

Over the weekend, one of the top Google search results for “cement milkshake” was a PJ Media story with the headline “Conservative Journalist Andy Ngo Beaten Up and Hit With Cement.” That story appeared higher in the results than a Portland Mercury newspaper story with the headline “Portland Police Offer No Proof That Protesters Had Milkshakes with Cement.” Though the results now show the Portland Mercury story as the top result, for much of the weekend, stories from PJ Media, Fox News, and others claiming that the milkshakes had cement showed up as the top results.

“That type of Google bomb,” says Decker, “is the goal.”