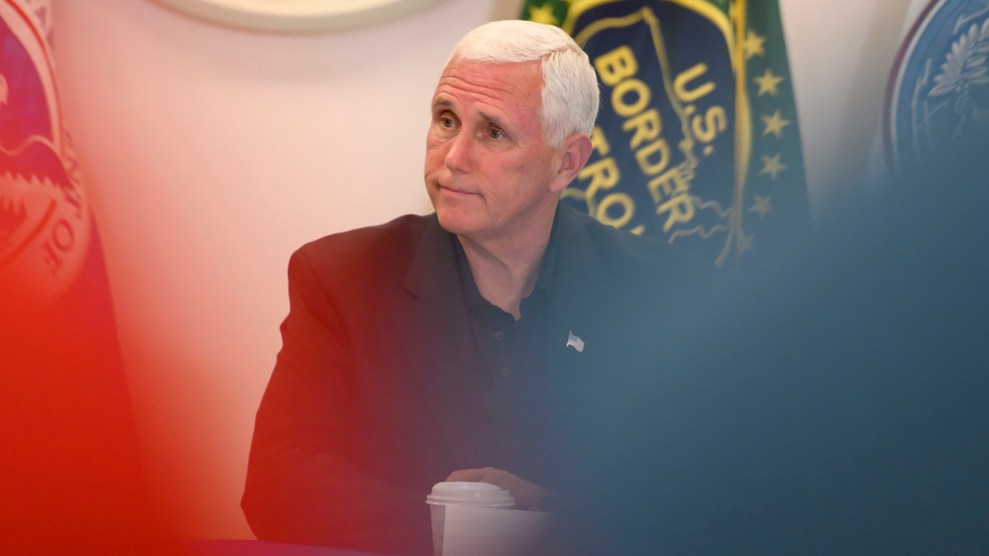 Vice President Mike Pence offered praise to Custom and Border Patrol after a visit to two detention centers in Texas Friday, despite witnessing conditions of severe deprivation for migrants held in CBP custody.

“People saying that families and children are being held in concentration camps is an outrage,” Pence told CNN.

“I was deeply moved to see the care that our Customs and Border Protection personnel are providing,” Pence said, according to the Washington Post, after visiting a sweltering and overcrowded facility in McAllen. “Coming here, to this station, where single adults are held, I’ve equally been inspired by the efforts of Customs and Protection doing a tough job in a difficult environment.” Pence added that he was “not surprised” had expected to see a system “overwhelmed” by a migrant crisis.

Pence also defended Border Patrol against the accusation made by Rep. Alexandria Ocasio-Cortez (D-NY) that the centers are like concentration camps. “I hope first and foremost that we put to lie this slander against Customs and Border Protection,” he told CNN on Friday. “People saying that families and children are being held in concentration camps is an outrage.” These comments came after Pence toured a facility in Donna, Texas, which is newer and cleaner.

Pence’s strong defense of CBP comes after the Department of Homeland Security’s own inspector general detailed harrowing conditions in holding facilities in Texas in a report last month. On July 1, ProPublica revealed a secret Facebook group in which current and former border patrol agents mocked immigrants and referred to Latina lawmakers visiting detention centers as “bitches” and “hoes.”

When Vice President Pence visited a migrant detention center here Friday, he saw nearly 400 men crammed behind caged fences with not enough room for them all to lie down on the concrete ground. There were no mats or pillows for those who found the space to rest. A stench from body odor hung stale in the air.

When reporters toured the facility before Pence, the men screamed that they’d been held there 40 days, some longer. They said they were hungry and wanted to brush their teeth. It was sweltering hot, but the only water was outside the fences and they needed to ask permission from the Border Patrol agents to drink.

The vice president reportedly wrinkled his nose when he entered the facility and left after a moment. According to the Post, Pence twice refused to say whether he found the conditions there acceptable after the visit. But he acknowledged to CNN that he found those conditions unacceptable and called on Congress to end the flow of migrants coming to the United States southern border.

Pence’s visit comes on the eve of Immigration and Customs Enforcement (ICE) raids on Sunday aimed at detaining immigrant families across the country.