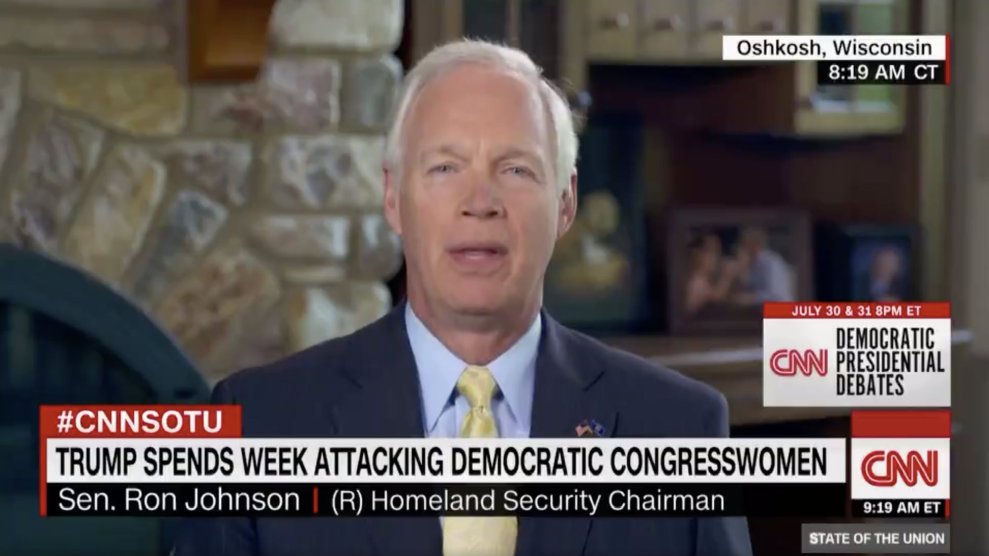 Republican Sen. Ron Johnson appeared on CNN’s State of the Union Sunday, where the Wisconsin lawmaker was asked to respond to President Donald Trump’s latest attack questioning the patriotism of four Democratic congresswomen of color. The tweet, which Trump posted Sunday morning, said the lawmakers were not “capable of loving our Country.”

When asked by host Dana Bash if he agreed with Trump’s tweet, Johnson deflected.

“The whole ‘America, love it or leave it’ is not a new sentiment,” he said. “You know, back in the ’60s that wasn’t considered racist.”

.@SenRonJohnson thinks this is a defense of Trump's racist tweets: "The whole America 'love it or leave it' is not a new sentiment. You know, back in the '60s that wasn't considered racist." pic.twitter.com/dZ2qLJo3yA

It’s an argument other Republicans have made recently, including Sen. Lindsey Graham (R-S.C.), who said Trump was simply calling back to the late 1960s, a time when the phrase “emerged as a slogan on bumper stickers and in country songs, and helped boost Richard Nixon’s presidential campaign,” as the Boston Globe put it.

“‘America, love it or leave it,’ is not a new sentiment nor a radical sentiment, and it certainly is not a racist sentiment,” Rep. Tom McClintock (R-Calif.) said on the House floor on Tuesday. “It should remind us of commonly-held and enduring founding principles that ought to be uniting us as a free people.”

Even if widely used, the phrase has long functioned as a nativist dog whistle, as some commentators noted on Twitter. Progressive activist Rev. William Barber II pointed out that the Ku Klux Klan even used it on signs in his home state of North Carolina.

When Trump says, If you don’t like, it leave it,” people I know say it reminds them of a sign like this from 1971 in NC county near where I live. pic.twitter.com/uTaQP0ckmp

Ibram X. Kendi, author of Stamped from the Beginning: The Definitive History of Racist Ideas in America, recently told Mother Jones‘ Jacob Rosenberg that phrase has long been intertwined with race in a way its defenders either deny or don’t acknowledge:

What happens in your mind when you hear a phrase like “America: Love it or leave it”?

My initial thought is that it sort of conveys—particularly to people of color—that this is not our home. Because it’s almost this idea that, “How dare you come into my home and criticize it?” And so it makes complete sense if this is not our home that we have no right to criticize it. But if it is our home, then I have just as much right to criticize and want to make it better as anyone else.

And the idea of who can criticize America has been discriminatory?

This history seems to have been lost on Johnson, who told Bash, “I just find it very unfortunate that so many parts of our public debate right now get immediately stuck inside a racial framework.”

He added, “I would like to see us moving toward that colorblind society.”