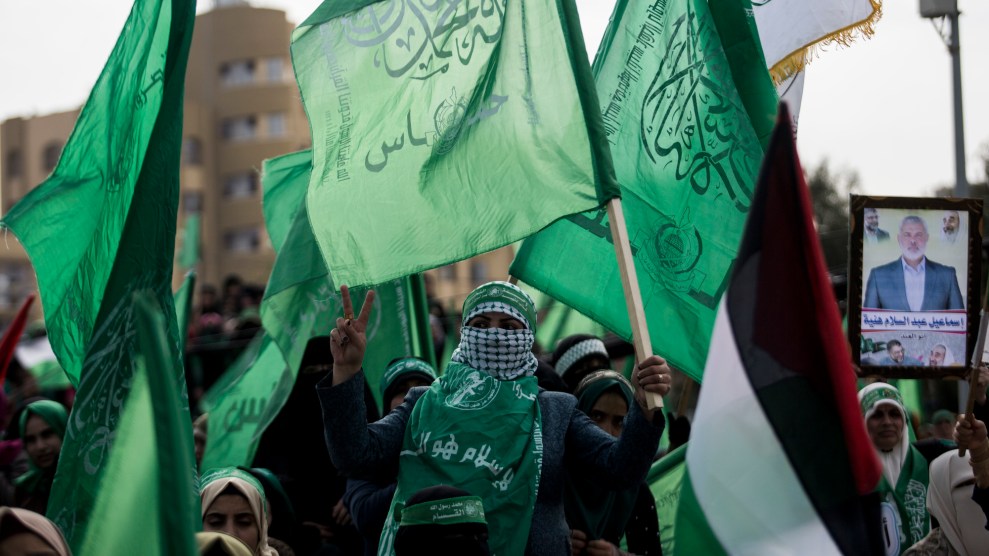 A masked Palestinian holding a flag during a rally marking the 31st anniversary of Hamas in Gaza City on December 16, 2018.Mahmoud Issa/SOPA Images/LightRocket via Getty Images

In 2013, I accidentally started a rumor involving Hamas and the Obama administration. Six years later, a version of the rumor is back in the right-wing media.

It began after I’d heard scuttlebutt on Capitol Hill that Chuck Hagel, who had recently been nominated by President Barack Obama as defense secretary, might have given paid speeches to controversial foreign groups. Hagel was already under attack by some conservatives for his allegedly anti-Israel views. I asked around on the Hill about this, suggesting sarcastically to a Republican Senate aide that maybe Hagel had addressed a group called “Friends of Hamas.” I’d made this name up. It was supposed to sound so absurd and controversial that it was obviously fake.

But through a game of Capitol Hill telephone, my invention reached Ben Shapiro, then a writer for the conservative news site Breitbart. The day after my conversation, Shapiro wrote an article stating that “Senate sources” told him that Hagel had received “foreign funding” from a group “purportedly called ‘Friends of Hamas.’” Did Shapiro think that an organization named after the Gaza terror group really existed, with no internet footprint, and paid a former senator for a secret speech? It’s not clear he cared. He hadn’t checked further. “The story as reported is correct,”  he told me then. “Whether the information I was given by the source is correct I am not sure.” (I documented my role in starting this rumor in a story for the New York Daily News.)

This willful misunderstanding, dormant for six years, sprang back to life Monday. The Washington Free Beacon, a conservative publication, ran a hit piece on Max Berger, a staffer on the presidential campaign of Sen. Elizabeth Warren (D-Mass.). On February 20, 2013, the same day my story ran, Berger tweeted, “Confession: I would totally be friends with Hamas.” The Free Beacon article presented Berger’s tweet as an example of his work as an “anti-Israel activist,” alongside his role in starting a Jewish group opposed to Israeli occupation of the West Bank and Gaza and his various criticisms of Israel’s policies. Berger apparently deleted the tweet, along with many others, when Warren hired him.

The article does not mention that Berger, given the tweet’s timing, was clearly making a joke about the Friends of Hamas myth, something many people, including the Free Beacon article’s author, Adam Kredo, did around the same time. The tweet’s connection to my story was flagged by Washington Post reporter Dave Weigel, who in 2013 also first raised doubts about Shapiro’s article.

A spokesman for Warren’s campaign said the Free Beacon quoted Berger out of context. Kredo did not respond to an email.

Looking back, 2013 feels like a really long time ago. In those halcyon days, my story recounted how Shapiro’s post had raced across conservative media, where Hagel, a former Republican senator from Nebraska who famously broke with George W. Bush over the invasion of Iraq, was already anathema. But my piece, boosted by Breitbart’s many critics, went way more viral. The New Yorker, the New York Times, NPR, the Washington Post, The Atlantic, Stephen Colbert—it seemed like everyone cited it. A writer for Wonkette called me “foxy.” The HBO show Newsroom fictionalized the incident in a subplot about a producer who inadvertently causes a far-right site to report that a solicitor general nominee addressed a group called the Righteous Daughters of Jihadi Excellence. (I’d have told the writers that’s too long, if they’d asked.)

Eric Boehlert of the progressive media watchdog group Media Matters for America cited the incident as an example of the “GOP’s chronic, failed attempts to use the Internet to win elections and bolster its brand.” Breitbart was a punchline. I felt bad for Shapiro. (He later called his post a mistake.) Hagel was confirmed, an early victory for Obama in his second term. Truth won. It even seemed possible to get away with a risky joke online.

Obviously, things have changed. Shapiro’s career, hardly hindered, took off. After publicly breaking with Breitbart, Sharpiro founded the Daily Wire, a conservative site that claims strong traffic, and a companion podcast that my app keeps suggesting I listen to. The Times, noting his success drubbing collegiate critics, called him a “provocative gladiator” and a “conservative thinker, entertainer, trash talker and destroyer of weak arguments.” Breitbart’s audience kept growing. That’s changed recently, but the site’s influence has moved to the White House. CNN reported Monday that Breitbart‘s White House correspondent is taking a job on President Donald Trump’s Domestic Policy Council. Breitbart cofounder Steve Bannon, of course, helped make Trump president. Trump has since made more than 10,000 false or misleading claims, according to the Washington Post. Truth lost.

The marketplace of ideas, at least in journalism, tells people what they already want to hear. Back in 2013, people actually argued that the left was winning by allowing “smart people” to “operate freely” online. Friends of Hamas is a relic. We didn’t fully get it then. You can’t debunk lies that people choose to believe.