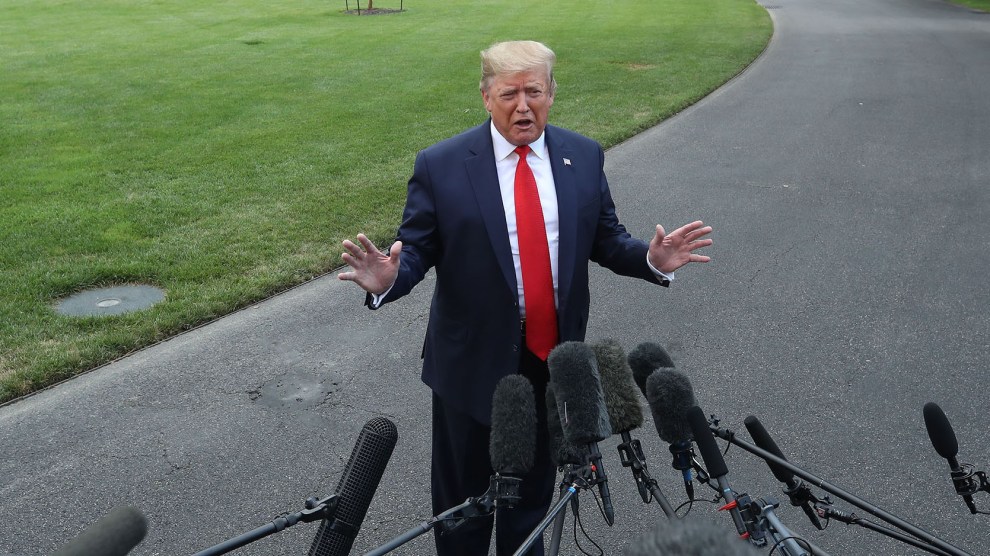 WASHINGTON, DC - JULY 24:U.S. President Donald Trump speaks to the media about the Mueller report before departing from the White House on July 24, 2019 in Washington, DC. Today former special counsel Robert Mueller testified before the House Judiciary and Intelligence Committees on his reports findings. (Photo by Mark Wilson/Getty Images)Mark Wilson/Getty

With the clock ticking before former special counsel Robert Mueller’s testimony before Congress, President Donald Trump blasted the highly anticipated hearings as unfair and falsely accused his political opponents of fabricating crimes against him.

The president also complained about a last-minute request by Mueller to have his longtime aide, Aaron Zebley, testify with him as a witness before the House Judiciary and Intelligence committees. The Judiciary Committee ultimately denied the request but allowed Zebley to appear with Mueller should the former special counsel require assistance during the hearings.

Still, Trump framed the arrangement as a violation of what had been agreed upon, even though the White House lacks a role in determining how the hearings are organized. He continued his rant by taking aim at Hillary Clinton, James Comey, Andrew McCabe, and other usual targets, even suggesting that Mueller should have investigated himself.

Trump’s latest outburst against Mueller, delivered in a series of tweets, came as Mueller prepares to answer lawmakers’ questions on the findings of the Russia investigation. Committee Republicans are likely to echo the president’s longstanding attacks against the special counsel while resurrecting a number of Deep State conspiracy theories designed to discredit the special counsel’s two-and-a-half-year probe.

So Democrats and others can illegally fabricate a crime, try pinning it on a very innocent President, and when he fights back against this illegal and treasonous attack on our Country, they call It Obstruction? Wrong! Why didn’t Robert Mueller investigate the investigators?

It was NEVER agreed that Robert Mueller could use one of his many Democrat Never Trumper lawyers to sit next to him and help him with his answers. This was specifically NOT agreed to, and I would NEVER have agreed to it. The Greatest Witch Hunt in U.S. history, by far!

So why didn’t the highly conflicted Robert Mueller investigate how and why Crooked Hillary Clinton deleted and acid washed 33,000 Emails immediately AFTER getting a SUBPOENA from the United States Congress? She must have GREAT lawyers!